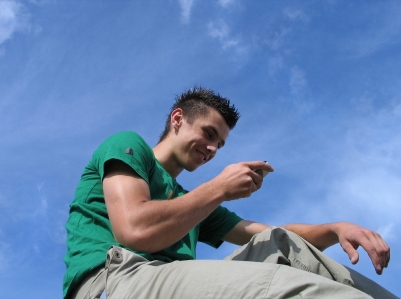 A few years ago I noticed a new sign posted at our local swimming pool.  The sign read, “Absolutely no cell phone use in the locker rooms!”

At first, when I saw the sign I felt like some of my rights had been taken away or something.  It felt like I was being controlled.  Not that I had ever made a call in the locker room before, but what if someone called or something?  Why did the pool administration feel the need to micro-manage its patrons?

The majority of patrons to the local swimming pool are high school and middle school-age teens.  They have swimming classes and swim teams there because it is also used as the high school swimming pool.  And, most of these teens have cell phones.  Families with children aren’t probably who the sign is talking to as much as the teens who visit the pool daily.

After a few seconds of assessing the situation I realized that this precaution was a sign of our times.  We live in a time when each person has a camera attached to him at all times, which can send a photo in a split second to anyone on the planet.  This is good and bad.

When something important happens and news needs to travel fast — such as when someone has a new baby — phone cameras are the best!  However, if a person snaps a photo of an unsuspecting person in a locker room and then sends it to others for a laugh or worse, then phone cameras are a risky temptation.

In no time I went from feeling suppressed by the sign to feeling suppressed by the tempting practices that are enslaving the minds of so many people, young and old, in our society.  Now, not only can I not buy Sudafed off the shelf any more because people make Meth out of it, but I can’t dress in a locker room without being on my guard, all because so many people are slaves to the flesh.  Oh, the times we live in.

Just when I thought I had that sign at the swimming pool all figured out I met Jake.  Jake is a handsome seventeen-year-old who has always had plenty of attention from the girls.  But Jake doesn’t really like that attention too much because it has become increasingly more uncomfortable.

While talking to Jake, I told him I noticed that he had been paying a lot of attention to a certain young lady.  He said, “Oh yeah — Susan.  She is a really good girl.  She doesn’t send pictures.”

I had to use my imagination for a minute on this one.  It was new.  “Send pictures?”  I said.

“Yeah.  If people are interested in someone they send a picture of themselves.”

Apparently, according to Jake, girls go into school restrooms during school and take pictures of themselves without their clothes on or in their underwear and send it to boys they like to try to get a date or strike up a conversation.

Upon hearing this I was glad I knew a boy like Jake in this crazy world, but I was also sickened by this new social trend.  It is forced pornography.

I have another friend, age sixteen, who told me one day about the big change he made in his life.  He said that he had sinned greatly the year before by having sex with a girl on multiple occasions.  He has now made so many changes in his life to safeguard against that mistake ever happening again.

I asked my friend how he ended up going down that road to sin at such a young age, when he was raised by good parents who had taught him differently.  He said, “Well, it all started with pictures she would send me on my phone…”

How to Keep Your Children Safe

The way I see it, there are three options parents have in combating the cell phone pornography problem.

I invite you to take the time to list the advantages and disadvantages of each of these options and decide what is best for your family.  Making a conscious decision on the issue prepares you for further conversations you will need to have with your children and helps you feel secure in your possible no answer to your child.

After all, the limitations are for the safety of the children, spiritually as well as physically.  When we know we are acting on the best interest of our child, we don’t need to question or feel pressured to keep up with the other families in our areas by getting our children every device available.  We can be different and safe instead.

No matter which option you make your solution to the social problem, I recommend regular follow up on the conversation you have already had with your child about the social situation.  In Parenting A House United there is a whole chapter on preparing children for our sexual world and on recognizing sexual problems as well as a chapter on how to have conversations about delicate subjects.  You can find more helpful material there.