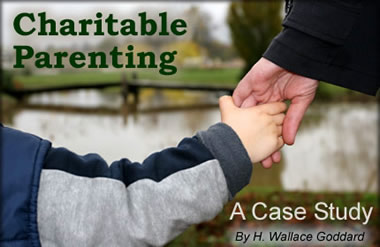 There is a nationally-syndicated columnist who regularly gives advice to parents on managing their children. Many parents appreciate his no-nonsense approach. He observes that many parents in our society fail to enforce reasonable limits with their children. For many, this failure to act results from a fear of losing their children’s goodwill if they take strong action.

This failure to put limits on bad behavior has serious consequences for our society. The columnist and I agree on that point. Parents must let their children know that they are serious about the rules they make. The way children know we are serious is by that we enforce reasonable rules.

Yet there is a danger in focusing first on consequences. “The letter killeth but the spirit giveth life” (2 Cor. 3:6).

To move this from an abstract, academic discussion to a practical one, I will provide an example from the columnist’s published column and contrast his approach to one that would probably be more acceptable to scholars who study children and, in my view, to true believers in Christ as well.

A mother wrote to the columnist that their 4-year-old daughter at some point during a meal would sometimes decide that she couldn’t swallow her food. When told that she cannot spit it out, she would hold the bite for hours. The mother reported that they had tried many things to get the daughter to swallow: having her remain at the table for hours, skipping the next meal, returning the unswallowed food to her at the next meal, removing toys and privileges for weeks, banishment to her room without toys, spanking, praising on those rare occasions when she swallowed, and withholding dessert.

Almost parenthetically, the mother noted that the girl was adopted internationally a year previous. The problem began about four months after the adoption. The mother also mentions “other children” in the family.

Let’s begin with the columnist’s recommendations. He first suggested that it was not useful to look for a psychological cause for the behavior. “This is one of those weird, strange, inexplicable things that some children sometimes do, for no obvious reason at all.” Further, “some of the things children do defy explanation.  Some of the odd stuff in question is harmless to the point of being funny.  What your daughter is doing is funny (to me, at least), but it’s also a very clever, subtle form of defiance.”

I wonder if all of this is funny to the child who doesn’t swallow. I doubt it.

The columnist offers “a creative solution” very confidently – offering to chew his hat if it doesn’t work: “You simply tell your slyly defiant and highly intelligent little princess that you called her doctor and he/she said that not swallowing happens because a child is tired and doesn’t even know it … Your doctor said that from now on, if you take a bite and you are so tired that you can’t swallow, you have to go to the bathroom, spit it out and go to bed. If she balks at swallowing, and you begin the procedure, and she suddenly decides to swallow, you must still put her to bed.  Just tell her the doctor said that even having problems swallowing means she’s tired and doesn’t know it. I predict that in a week or two, it will be a thing of the past, and I will still have my hat.”

Does this counsel sound good to you? If you were the child, would it seem helpful to you? Is it likely that Jesus would act this way?

Certainly there are many responses to these questions. I don’t believe there is only one “right” answer. But if I were responding to the parent’s question, my recommendations would be quite different from those of the quoted columnist.

I first recommend the kind of compassion and humility that comes from understanding the child’s experience. What were the first three years of the child’s life like? How was she nurtured and nourished in those years? Did she have consistent and caring attention during those three years before she was adopted? Under what circumstances was she adopted? How has this little girl integrated with the other children in the adoptive family? Does she have friends? What is the child’s personality or temperament like? Is there a certain food that she refuses to chew? Are there foods she enjoys? What kind of food did she have before the international adoption? Was there unusual stress in her life at the time the problem behavior began? How have siblings reacted to the non-swallowing? Has this girl been teased previously about her eating? How affectionate and appreciative do the parents feel about this child when not at the dinner table? Does the little girl have friends and activities she enjoys?

To confidently recommend a certain remedy without knowing the child’s history seems like serious malpractice to me. While some sensible actions can be suggested based on the scant information provided by the parent, humility is a wiser stance than dogmatism.

The Limits of Power

Apart from the failure-to-get-vital-information issue, there is another issue. Any parent advisor who has read research knows that the “put-the-child-to-bed” prescription is a power technique that guarantees a lifelong contract with conflict. The power technique may have a smile on its face but it is unmistakably a power play. No child will be fooled no matter how big the smile. The burden of research on guiding children recommends against the strategy suggested by the columnist.

The behavior recommended by the columnist may work in some narrow sense. It is likely that the child will start swallowing the food rather than be put to bed. Yet the real sickness will go untreated. Does this child feel desperately confused in her new country? Does she feel stupid and helpless (maybe even picked on) in a family that already knows the rules of American life? Does she feel lonely and unloved?

The most clear finding of decades of research on parenting is that the most important factor in determining a child’s outcome is love. Children who have people who understand, support, love, and teach them, are likely to become strong and able adults. By turning up the power on the annoying but harmless behavior, the columnist guarantees continuing trouble. Worse yet, the prescriptions almost guarantee that the root problems will get worse. Today’s dinner battles may become tomorrow’s eating disorder, anxiety problem, learned helplessness, or depression.

Based on the scant information provided by the parent, I would recommend minimizing the swallowing issue by unceremoniously providing a “discharge” bowl for the little girl while encouraging family members not to worry about the swallowing issue. She is welcome to eat as much as she is inclined to eat and may stop at any time. At the same time I would look for ways to strengthen the parent-child relationship away from the dinner table. The Number 1 question for her parents (and all parent advisors) is “What is life like for this 4-year-old?” I would recommend that the parents monitor the child’s food preferences while noticing the child’s areas of connection, expression, and joy as well as any particular difficulties.

The child is trying to tell us something. We will get the message only if we have the patience and wisdom to hear and interpret her message. As a side note, the best writing on the subject of families and eating is probably Ellyn Satter, who underscores that we should not turn eating into a battleground. Many of us are still struggling with irrational eating because of ill-advised eating rules in our childhood homes.

The columnist’s recommendations have a certain natural appeal. I wonder if that is because the natural man in each of us wants to be obeyed. The natural man does not even want to be inconvenienced. “Things should be done my way – and done promptly.”

In contrast to the natural man is the “man of Christ” (Helaman 3:29). Just as Jesus consistently responded to injury with compassion (see the parable of the Good Samaritan, for example), so I feel sure that Jesus would minister to a little, adopted girl’s loneliness in her unfamiliar world. He might take her in His lap and hum to her. He might ask her what foods from her native country were her favorites. I can imagine him making a bear out of peanut butter balls for her – if He knew that she liked peanut butter.

Clearly there are children’s misdeeds that need “consequences” and teaching. But if we lead with correction rather than compassion in our responses to children, we are not friends to children and we are not His disciples. “By this shall all men know that ye are my disciples, if ye have love one to another” (John 13:35). Overriding love is what distinguishes His followers from all others.

In some ways we are much like God in our relationships with children. We have far more power than they. We rule over them. The question for all of us who are parents is whether we will choose to act like God, whose name is love, or like Satan, whose motto is compulsion. Will we lead with heavenly charity or devilish control? Will we be saviors or tormentors?

“But whoso shall offend one of these little ones which believe in me, it were better for him that a millstone were hanged about his neck, and that he were drowned in the depth of the sea” (Matthew 18:6).

It is the natural man who turns a call for help into an opportunity to punish. The man of Christ will respond with healing compassion and patient ministration.

Of course there is more than love to effective parenting. The next Myth of the Month will talk about heavenly ways of setting limits.