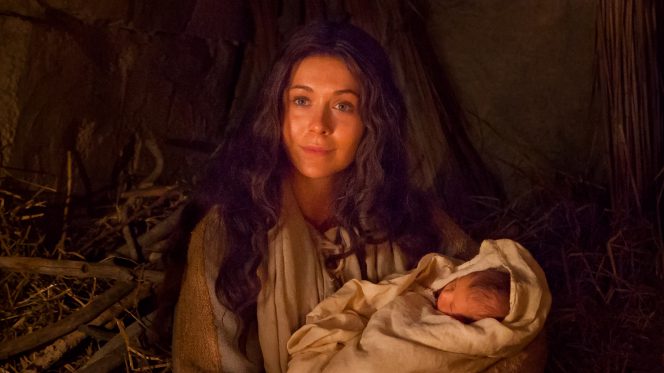 A Deeper Understanding of the Birthplace of Christ

I was able to visit Israel many years ago, and one of my favorite pictures that I have from that experience is of myself holding a baby lamb at Migdal Edar, better know as the “Tower of the Flock” or “Shepherd’s Field” in Bethlehem. Bethlehem is the royal City of David, so named because David took the fort and watchtower of the Jebusites on what was known as Mount Zion in Bethlehem and dwelt in it (1 Chronicles 11:7). Migdal Edar, Shepherd’s Field, or the Tower of the Flock, is the traditional place where the royal flocks were therefore raised and cared for. In ancient times, the watchtower was used by the shepherds for protection from their enemies and wild beasts. In this sheltered building which was once the royal compound of David, shepherd priests would bring in the ewes which were about to bring forth their lambs. These special lambs became part of the unique temple flock, used for the continual burnt offerings made at the temple, and represented the price paid for Israel’s redemption from sin.

Migdal Edar lay close to the Temple, in the land of Jerusalem, in the hamlet of Bethlehem (which translated, means “House of Bread”). Depending on which of the three possible areas today you think was the original Migdal Edar, it was no more than about 1–2 miles from Jerusalem. One of the priest’s duties was to verify that the lambs were in conformity with The Law, and worthy, to be used in such a setting: they had to be without blemish, with no bones having been broken during birth or thereafter, and without any defect. It was also their job to swaddle the newborn lambs in linen when they came forth — to clothe them in white. The shepherds who kept them were men who were specifically trained for this royal, priestly task.

Being themselves under special Rabbinical rules of cleanliness and holiness, they would strictly maintain a ceremonially clean stable for a birthing place.This conflicts with many of our modern hymns and other traditions regarding the manger scene, filled with chickens, cows, and goats, etc. In reality, it is very unlikely any other animals would have been found there. The Tower of the Flock was used for birthing ewes, and the surrounding fields were where the shepherds grazed their flocks. These shepherds customarily kept their flocks outdoors twenty-four hours a day every day of the year, and only brought the ewes in to deliver their lambs where their worthiness as sacrifices for Israel could be verified according to the law.

I believe it was to this place that Joseph took Mary when they discovered the inn was full. It was in this special stable at Migdal Edar of Bethlehem — the Tower of the Flock — that Christ was born. Why would they have gone there? Could any Israelite simply seek shelter at a royal and traditionally sacred compound? Joseph’s ancestral lineage is found in Matthew 1:6–16. Mary’s is normally understood to be represented in the last half of Luke 3. Both were descendants of King David. Staying in the royal compound of Migdal Edar was probably not a hospitality offered to everyone in Israel, but for Mary and Joseph, it was their right.

Many have dramatized the nativity to show them going from door to door, only to finally encounter one grumpy old inn keeper not completely indifferent to the couple’s pregnancy or plight, heartlessly pointing them around back to stay with the various animals there. Centuries of poetic license can be significantly misleading. A close reading of Luke 2 shows no justification for this narrative. It simply says: “And she brought forth her firstborn son, and wrapped him in swaddling clothes, and laid him in a manger; because there was no room for them in the inn” (or “inns” as found in Joseph Smith’s inspired revision of verse 7).

Even more evidence for this theory comes from an angel, who shortly thereafter announced the birth to shepherds nearby. The angel only told the shepherds that they would find the babe wrapped in “swaddling cloths and lying in a manger.” There was no need for the angel to give the shepherds further directions to the birth place, because that simple description was enough! Why? These men were the shepherd priests, who raised sacrificial lambs for the Temple! When the angelic announcement came, they knew exactly which manger, for it could only mean THEIR manger at the tower of the flock! They immediately said, “Let us now go even unto Bethlehem, and see this thing which is come to pass, which the Lord hath made known unto us.” (Luke 2:15). How did they know it was in nearby Bethlehem? Why not a manger in Jerusalem, or one of possibly dozens even closer, or along the way? How did they find Him with such “haste” (vs 16)? You cannot explain the meaning or direction of the sign they were given, or their response, unless you have the right manger and the right shepherds!

Migdal Edar, the Tower of the Flock at Bethlehem is the perfect place for Christ to be born. More than likely, He was born in the very birthplace where tens of thousands of lambs, which had been sacrificed on the temple altar to prefigure Him, were also born. Those shepherds who witnessed of his birth were performing a priesthood duty, witnessing that He was indeed worthy of becoming the great and last sacrifice, a spotless and perfect Lamb.

Finally, if you are still looking for further scriptural evidence, consider these seldom-read verses from the fourth chapter of Micah in the Old Testament:

8 ¶And thou, O tower of the flock, the strong hold of the daughter of
Zion, unto thee shall it come, even the first dominion; the kingdom [or “kingship” in some translations] shall come to the daughter of Jerusalem.

9 Now why dost thou cry out aloud? is there no king in thee? is thy
counsellor perished? for pangs have taken thee as a woman in travail.

10 Be in pain, and labour to bring forth, O daughter of Zion, like a
woman in travail: for now shalt thou go forth out of the city, and
thou shalt dwell in the field, and thou shalt go even to Babylon;
there shalt thou be delivered.

A first dominion, a king, and a kingdom, coming to the tower of the flock in Bethlehem in conjuction with a woman giving birth? Accompanied by a second “deliverance” by flight to Babylon? (Egypt/Babylon is where the family fled shortly after Christ’s birth to escape Herod) To me, this prophecy could not be more clear.

It is my witness that Christ was indeed a worthy sacrifice, perfect and without blemish. From the day of His birth, He fulfilled the Law. Although thousands of lambs came before Him, Christ was the Great and Last Sacrifice to be made for Israel. One of the signs the angel told the shepherds they could use to recognize Him, was His being laid in a phatnē, or manger. Today, that word would be more commonly translated as “feed trough”.

Born in the “House of Bread”, Jesus Christ is indeed the Bread of Life. May you partake deeply of Him this Christmas season.

I found some source material on Christ's birthplace that provides some documentation for Kirkland's article. Just scroll through all the advertisements etc following the article "Was Jesus Born Away..." to the comments section. https://www.patheos.com/blogs/faithwalkers/2012/12/was-jesus-born-away-in-a-manger-at-migdal-eder/

Thank you that explains a lot. A very fitting and logical explanation, especially if you also look at it with the Hebrew way of thinking. (google it) There is a certain order of things that shows the hand of a great organizer, God himself.