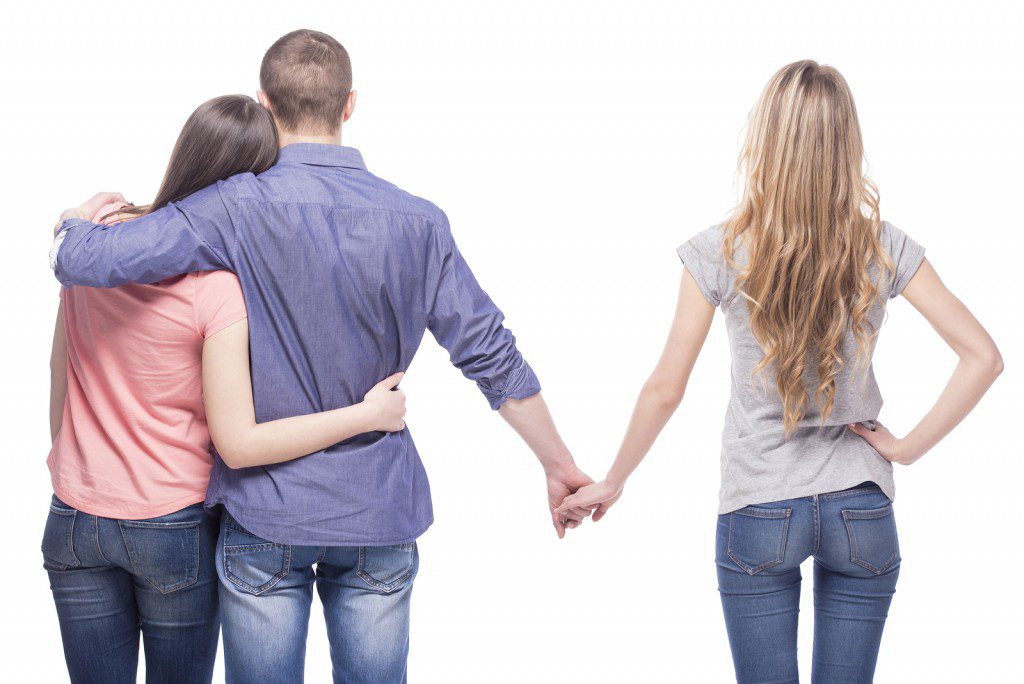 Your Hardest Family Question: My husband wants to openly love another woman

My husband of 22 years is obsessed with a woman he met while he was out of town. She lives on the other side of the country. It came as a TOTAL shock. No warning. He says at this time he doesn’t want to repair our marriage or the damage he’s done to me but he’s not sure he wants a divorce, either. The only time he went to therapy with me was to tell the therapist that the solution is for us to have an open type relationship so he can have both of us. I was in shock. I’m sure the idea came from this woman who’s been married four times and broke up at least three marriages. But he says he’s in love with her. When anyone says midlife crisis, he walks away.

He did go to individual counseling once, but left when the therapist told him he’s being delusional and living in a fantasyland. Now, he’s left the house to think and not be bothered by all my crying and pain. I found a secret phone after he said he broke it off with her, but he says the pull to her is too strong to end it cold turkey. He’s angry with me for not accepting his “solution”. Now, he says the last 22+ years were a waste of time for him. Do you have any help for me?

Your husband doesn’t love this woman. That’s the wrong word. Your husband is infatuated with this woman. There is a huge difference. Love is about commitment, sacrifice, loyalty, unselfishness, and compassion. Infatuation is a completely different emotion.

The reason I make this distinction is because when an unfaithful partner uses words like “love” to describe their feelings for the other person, it can make you feel like you weren’t enough. The reality is that it’s impossible for them to make a direct comparison. The conditions of the two relationships aren’t similar in any way. An affair is a fantasy based on lust and selfishness.

Dr. Shirley Glass researched affairs for over thirty years and found that unfaithful partners believe they’re in love when in reality they’re experiencing the high that comes from obsession. The following are conclusions she made about the feelings of “love” in an affair:

Your husband is in an affair. He’s not capable of offering you or this other woman love. You have to decide if you want to wait around while he continues his affair. He says he’s taking a break to think about what he wants. However, if he’s taking time to think about the relationship with you while he’s still engaging in a relationship with her, then he’s made his decision. You have to now decide what you’ll do.

You committed to be faithful to each other when you married. Your husband wants to break that agreement and change the rules. If he had an issue with that agreement, he should have talked with you about his concerns before he broke the promise. He’s now changing the rules because he doesn’t want to give up the high he’s experiencing from this affair.

You have a difficult road ahead of you. None of this is fair to you, but you have to make a decision of what you’ll do. You’re in shock and are having difficulty making sense of this awful reality he’s dumped on you. Get some professional and spiritual help to guide through the decision making process so you can make the best decision for you and your family.

I must admit that I had similar feelings to your husband's several years ago. He loves you for what you're able to provide for him and "loves" her for what she has been able to offer him. It's like he's trying to squeeze the best of both personality traits into one being but is not able to do so so why not keep both of you? He can have all of this in one being and that being is you, his wife. Communication with much prayer and fasting is the key. What happened to me? It's true, it's lust and selfishness. From experience, I ended up in the situation because I felt my husband was not spending adequate time with me. I felt alone. He worked long hours. It seem he preferred to work rather than spend time with me. Come to find out, years later when I finally revealed the affair, he was stressed out about supporting our family and making ends meet. Had we communicated from the beginning, I am sure things wouldn't have turned out the way they did. My affair is posted at illegallyloved.blogspot.com to read about the feelings I had during the time being. It may give you an insight on his feelings somewhat. When I finally came to my senses, I separated from my husband without revealing the affair, moved out of the state with my children, and broke off all contact with the other man under the direction of the Bishop. It helped me figure out who I truly loved, my husband or him. Going back to daily prayers and scripture reading, I came to realize true love for my husband. The remembrance of his patience, the sacrifice, and his willingness to improve caused me to confess and deal with what comes along.

This is unfair to many of the singles in the church, there are only so many sisters to go around. If he has two, another bloke will have none.