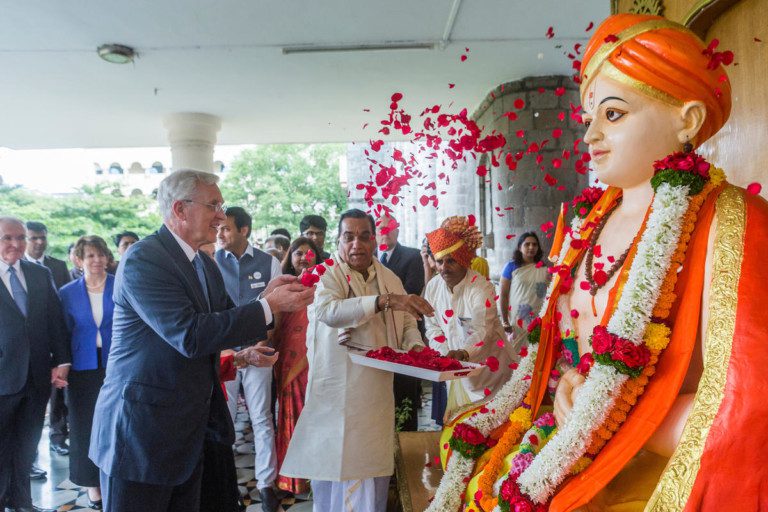 PUNE, Maharashtra, India — As the standoff over nuclear weapons continued Monday between the United States and North Korea, a senior Mormon leader accepted a World Peace Prize in India and called on world leaders to recognize that a failure to accommodate religion results in conflict.

White horses led a large procession to honor Elder D. Todd Christofferson, who walked down a green carpet on the street outside the World Peace Center in Pune, India, to the sounds of Indian bagpipers and high-pitched cymbals.

“My friends, peace is our common aim,” said Elder Christofferson, a member of the Quorum of the Twelve Apostles of The Church of Jesus Christ of Latter-day Saints. “Peace between countries, peace within communities and peace, ultimately, for each of us.”

Michael Nobel, a great-grandnephew of the founder of the Nobel Peace Prize, joined the World Peace Prize Committee and the president of World Peace University as they conferred the award named for Philosopher Saint Shri Dnyaneshwara, a revered 13th-century Hindu saint.

“The world today, with all its problems, it needs you, the church you represent and your work,” Nobel said. “It needs you more than ever. Thank you, Elder Christofferson, and my sincere thanks to your organization for continuing your work.”

The emotional ceremony was a spectacle of color, music, traditional Hindu prayers and honorifics. The event took place under a massive tent outdoors, with nearly 5,000 people sitting on chairs covered with white cloth under twirling fans. The celebration began with a World Peace Prayer.

Elder Christofferson and his wife, Sister Kathy Christofferson, joined everyone by pressing their fingers and thumbs together and chanted the pranava, the sacred mantra, “Om.”

Then they joined a long line of dignitaries to pull together on a rope that rang a bell for world peace and democracy.