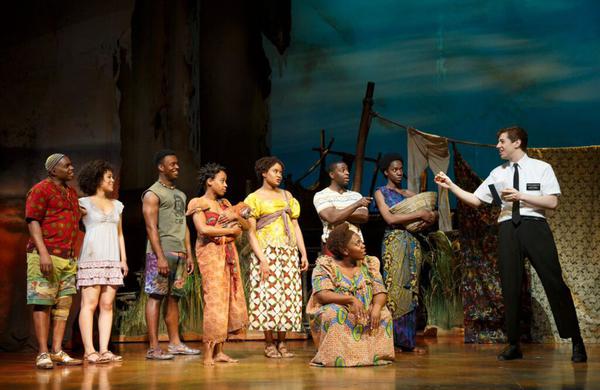 Dallyn Vail Bayles wrote this assessment of The Book of Mormon musical for the Deseret News. The offensive and vulgar Broadway hit that skewers Mormons opened July 27 in Salt Lake City for a two-week run. Some highlights from his article which can be read in full here:

Where the writers Trey Parker, Matt Stone and Robert Lopez crossed the line was not in their treatment of us as a people, or even in the way they presented our history or doctrines (they do slightly skew our teachings and beliefs about faith, obedience, prayer, self-control, salvation and the afterlife — but we’ll leave that for another time). No, where the writers went too far was in their blatant blasphemy and desecration of things that I hold sacred.

But perhaps what I found most concerning was the musical’s core message and what it seemed to imply about religion in general.

This concern was shared by David Brooks, who wrote the New York Times op-ed piece titled “Creed or Chaos,” in which he describes the musical’s main message this way:

“The central theme of ‘The Book of Mormon’ is that many religious stories are silly — the idea that God would plant golden plates in upstate New York. Many religious doctrines are rigid and out of touch.”

Robert Lopez, in an interview with NY News, said, “There’s something supremely, ridiculously fake about (religion), but it helps people live their lives better, and there is something emotionally true about it. … But you don’t necessarily think that God talked to this guy and had him bury some plates in the ground … like, that’s ridiculous. But if believing in a goofy story helps a bunch of people live lives in a meaningful way, then it is true. That’s where we started from.”

It is a sad commentary on our world that so many have praised this musical which desecrates what Latter-day Saints hold as sacred.

We need not be concerned that unbelievers choose to destroy our faith. Satan has always used uninformed and compromised individuals to try to destroy us. We have the promise from the Lord that they will not prevail. Our prophet Brigham Young said it best when he indicated that the Gospel will roll forth and if there is opposition, the Gospel will grow even faster. When they say that Joseph Smith couldn't have received answers to his prayers it probably is based on the fact that they themselves have not received any answers. This may be because they arrogantly approach God , our Heavenly Father, with preconceived ideas and he will not answer them because of their arrogant attitude, rather than approaching with humility and determined to do what He wants them to understand and do. Why would the Supreme Being deign to answer such arrogance ? Rather than be concerned about such attacks, it can be a means for a dialogue with people that have not considered our faith until it is attacked. Good hearted people who earnestly desire to know more will benefit from their inquiry regarding our faith.

7 For the time cometh, saith the Lamb of God, that I will work a great and a marvelous work among the children of men; a work which shall be everlasting, either on the one hand or on the other--either to the convincing of them unto peace and life eternal, or unto the deliverance of them to the hardness of their hearts and the blindness of their minds unto their being brought down into captivity, and also into destruction, both temporally and spiritually, according to the captivity of the devil, of which I have spoken. Forgive them for they know Not what they do. Ignorance and blind. Worldly and pride bless these that drift and are confused and do not knock on the door that shall open. As a Imperfect fallen mortal I am mad and would like to meet them out back and kick there ignorant --- love your neighbor as yourself. I pray they seek and find the truth since the truth does not care if you know or not, it remains true. ✌️