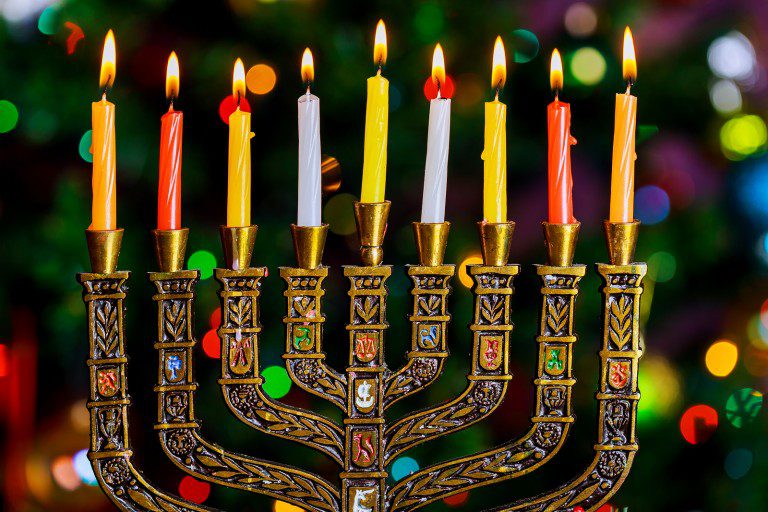 Why Mormons (And All Christians) Should be OK with “Happy Hanukkah!”

I’m going to try to add something new and hopefully uplifting to this never-ending “War on Christmas” debate. Many in our modern society, especially Americans, have become concerned about the politeness of their winter greetings, especially as we become an increasingly diverse population.

If the concern is that by saying “Happy Holidays” we are also wishing people a “Happy Hanukkah”, here’s why Mormons — and any Christian for that matter — should have no problem in wishing a joyous time of celebration to those who celebrate this ancient religious observance. Whether what follows leads to saying “Merry Christmas” and “Happy Hanukkah”, or just “Happy Holidays”, really makes no difference. In our zeal to be politically correct, we have often forgotten that there is only One who we should be concerned about offending, and He looks upon the heart and intent.

Also, my apologies to Kwanzaa. As this became more of a national debate in the 80’s and 90’s, people made the argument that it could actually be considered anti-Semitic to argue too vehemently for “Merry Christmas”, so they lumped Kwanzaa into the debate as a way to make it feel as if “Merry Christmas” vs “Happy Holidays” was more than just about Christianity over Judaism.

This is the question I want to address: Is Hanukkah something Christians — and Mormons in particular — ought to cherish and think on with fondness? To answer that question for yourself, all you need to do is understand what the celebration is all about.

The Origin of Hanukkah

The ancient Jewish people in the Land of Israel faced a grave threat when the Greco-Syrian despot Antiochus IV became king of the Seleucid empire in 175 BC. Syria controlled Judea at the time, but the Jews had been treated with tolerance by previous Syrian rulers. Antiochus IV, however, saw himself as a Greek deity in human form and his goal was to convert all the peoples of his realm to the worship of the Greek pantheon. This was not so difficult for many of his subjects, for they merely adopted Greek deity names, such as Zeus, to their own gods.

But for the Jews things were different. The Torah (the five books of Moses) taught of only one God — the God of Israel. Their greatest commandment was to love the Lord, their God, with all their heart (Deuteronomy 6:5), and the first and foremost of their ten commandments forbade the worship of any other gods (Exodus 20:3). The vast majority of the Jews of Judea vigorously resisted the Syrian conversion program. So Antiochus had his troops occupy Jerusalem and the Jewish Temple of Zerubbabel. The ordinances and ceremonies which honored the God of Israel were replaced with pagan rites, and the Temple was converted into a pagan shrine for Zeus and Antiochus. The Temple altar was defiled by having pigs slaughtered on it by false priests — acts of open disdain for Jewish values and tradition, and the Law of Moses.

Jewish religion and worship in general were outlawed. Their scriptures were confiscated and burned. Just possessing a scroll of the scriptures, or even participating in ordinances and practices such as circumcision and prayer to the Lord, became a capital crime, punishable by death. The historical book of First Maccabees reports that “women who had circumcised their children, they (the Syrians) put to death under the decree, hanging the babies around their necks, and destroying their families and the men who had circumcised them” (1 Maccabees 1:60). Had not something happened to change the course of Antiochus’ program of cultural genocide against the Jews, their religion and identity might have been obliterated within a few generations.

But something did happen. In 167 BC, inspired and led by an Aaronic priestly family known as the Hasmoneans, the people of Judea revolted against the Syrian occupiers. Their war of independence was led by an Aaronic priest known as Mattathias and his son Judah Maccabee, who was also a priest. Often called the Hasomonean Revolt, or alternatively the Maccabean Revolt, the Jewish insurrection gained strength and was ultimately successful in repulsing the Syrian forces. By the winter month of Kislev(normally around December in the Greek calendar) in 164 BC, the Jewish freedom fighters had recaptured Jerusalem’s sacred Temple Mount, and liberated the Temple of Zerubbabel from the pagan Syrians. As the war continued, the Maccabean Jewish forces eventually drove the Syrians out of the Land of Israel.

Having freed Jerusalem, the Jews undertook to cleanse and rededicate their holy Temple. According to rabbinic tradition, recorded in the Talmud (TB Shabbat 21:b), when the Hasmonean priests of Aaron entered the Temple they found only one clay jar of the consecrated olive oil used to light the great seven-branched lamp (menorah) in the Temple’s holy place. The single jar was enough oil for the lamp to burn for a single day. But anxious to rededicate the edifice, the high priest poured the oil into the seven cups on the menorah branches, and lit the lamps.

Then, a miracle occurred. Miracles are often an indication of what is important to God. They are clues into His priorities, His character, and they shed light onto what He values.

The oil that was only enough for one day burned for eight whole days, enough time for the dedication ceremonies to be completed, and also for new oil to be pressed and consecrated. This miraculous multiplication of consecrated olive oil was seen as a sign that God had been with the Jews in establishing their freedom and saving their religion and identity. The eight-day dedication period was celebrated by the Jews in Israel, and eventually throughout the world, each winter from that very year until the present, beginning on the 25th day of Kislev. The celebration has always been known as the festival of Hanukkah, meaning, the “feast of dedication.”

Jews today have a number of traditional practices belonging to the celebration of Hanukkah. The first, and most important, is the lighting of Hanukkah lights. A nine-branched Hanukkah menorah (known in Hebrew as a Hanukkiah) is the main instrument of the lighting (the word is pronounced ha-NOO-kee-yah). Small candles or vials of olive oil are placed in the nine arms of the Hanukkiah menorah, one of which is elevated above the other eight.

Other Hanukkah activities include the preparation and eating of foods fried in oil (to remember the miracle of the oil), and giving children coins to spend (which has evolved into a gift-giving tradition comparable to the modern Christmas season). Children often play a Hanukkah game for pieces of candy by spinning a small, four-sided top called a dreidel. Four Hebrew letters appear on the four sides of the top, representing the phrase “a great miracle happened there” — a reference to the miracle of the olive oil. Bonus trivia fact: If you buy a dreidel in Jerusalem, the 4 letters represent the phrase “a great miracle happened HERE”.

In some regards, Hanukkah is considered a minor festival, but this is only because it is not mandated in the Torah (the biblical Law of Moses). In practice, it is a major Jewish holiday period, and Hanukkah has been continuously celebrated for 2177 years!

Can Those Who Are Not Jewish Embrace Hanukkah?

Those who celebrate Christmas each December may find it of special interest to know that the Savior himself celebrated Hanukkah. Jesus, of course, was genuinely Jewish, and traveled to Jerusalem for all of the Jewish festivals. The Gospel of John reports that “It was … the feast of the dedication, and it was winter. And Jesus walked in the temple in Solomon’s porch” (John 10:22–23). The “feast of the dedication” mentioned by John was Hanukkah, celebrated, of course, during winter.

Jesus honored the Hanukkah festival the same way he honored the Passover and other feasts: he taught the people of his own divine identity and mission. I would strongly encourage anyone this Christmas, in addition to the traditional reading of Luke 2, to also study John 10:24–39.

Latter-day Saints (Mormons) and other Christians also ought to consider this: If there had been no Hasmonean revolt, and if the Jews had not liberated Jerusalem and rededicated their Temple — if Antiochus and the Syrians had succeeded in obliterating Jewish religion and identity — then there would not have been a Jewish village called Nazareth, nor would there have been a Davidic Jewish town called Bethlehem. There would have been no Jewish nation awaiting the coming of the Messiah. The entire setting for the birth and life of Jesus — as we now know it — would simply not have existed.

Hanukkah celebrates the miraculous event that witnessed God’s approval of the rescuing and re-dedication of His Temple. It seems entirely appropriate that people of Judeo-Christian values and traditions — and especially those who love the Temple — could join in wishing each other “Happy Holidays” — a Happy Hanukkah and a Merry Christmas! For I can assure you, God cares as much about the Temple today as He did 2000 years ago.

Very informative, very relavent to this holiday season.How do we come to know a people unless we know their history?. We need to learn to understand our brothers and sisters. If we are to truly live as brothers and sisters, and live in harmony, we must consider the source of all earthly life - our Heavenly Father. Great sacrifices and prices were paid, to eventually allow this Gospel dispensation to finally come to earth.We should rejoice with each other and in Christ.