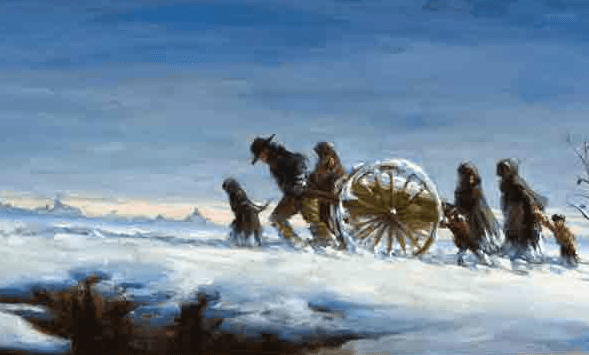 When the Martin Handcart Company was filled with “Joy Inexpressible”

Many of you may already be familiar with the conversion of Ephraim Hanks. President Faust wrote of him a few years ago:

Ephraim Hanks is a remarkable example of a young man’s obedience to spiritual promptings. In the fall of 1856, after he had gone to bed, he heard a voice say to him, “The handcart people are in trouble and you are wanted; will you go and help them?” Without any hesitation he answered, “Yes, I will go if I am called.”

He rode quickly from Draper to Salt Lake City. As he arrived he heard the call for volunteers to help the last handcart companies come into the valley. Eph jumped up and said, “I am ready now!” He was as good as his word, leaving at once and alone.

A terrific storm broke as he took his wagon eastward over the mountains. It lasted three days, and the snow was so deep that it was impossible to move the wagons through it. So Eph decided he would go on horseback. He took two horses, one to ride and one to pack, and picked his way carefully through the snow to the mountains. Dusk came as he made his lonely camp at South Pass. As he was about to lie down he thought about the hungry Saints and instinctively asked the Lord to send him a buffalo. As he opened his eyes at the end of his prayer, he was startled at the sight of a buffalo standing barely 50 yards away. He took aim, and one shot sent the animal rolling down into the hollow where he was encamped.

Early next morning, he took the two horses and the buffalo meat and reached Ice Springs Bench. There he shot another buffalo, even though it was rare to find buffalo in this area this late in the season. After he had cut the meat into long strips, he loaded up his horses and resumed his journey. And now I quote from Eph’s own narrative:

“I think the sun was about an hour high in the west when I spied something in the distance that looked like a black streak in the snow. As I got near to it, I perceived it moved; then I was satisfied that this was the long looked for handcart company, led by Captain Edward Martin. … When they saw me coming, they hailed me with joy inexpressible, and when they further beheld the supply of fresh meat I brought into camp, their gratitude knew no bounds. Flocking around me, one would say, ‘Oh, please, give me a small piece of meat;’ another would exclaim, ‘My poor children are starving, do give me a little;’ and children with tears in their eyes would call out, ‘Give me some, give me some.’ … Five minutes later both my horses had been released of their extra burden—the meat was all gone, and the next few hours found the people in camp busily engaged in cooking and eating it, with thankful hearts” (see Sydney Alvarus Hanks and Ephraim K. Hanks, Scouting for the Mormons on the Great Frontier, pp. 132-136, 140).

Certainly Ephraim Hanks’s obedience to spiritual promptings led him to become a vanguard hero as he forged ahead alone through that devastating winter weather to preserve many pioneer lives. Because he listened to the whisperings of the Spirit and obeyed the counsel of the Brethren, Eph became a notable liberating force in the lives of those desperate, struggling pioneers (James E. Faust, “Obedience: The Path to Freedom,” Ensign, May 1999, 47).

What a wonderful thing it is to be able to say, when called to service in any capacity in the Kingdom, “I am ready now.” Eph Hanks was always ready.

I never tire of hearing this incredible story! The message to us is loud and clear. When we hear and feel the promptings of the Spirit, act upon them immediately! When we obediently do so, more frequent promptings will come to bless our lives and others! Another idea: write down these Spiritual promptings that we have to strengthen our own posterity!