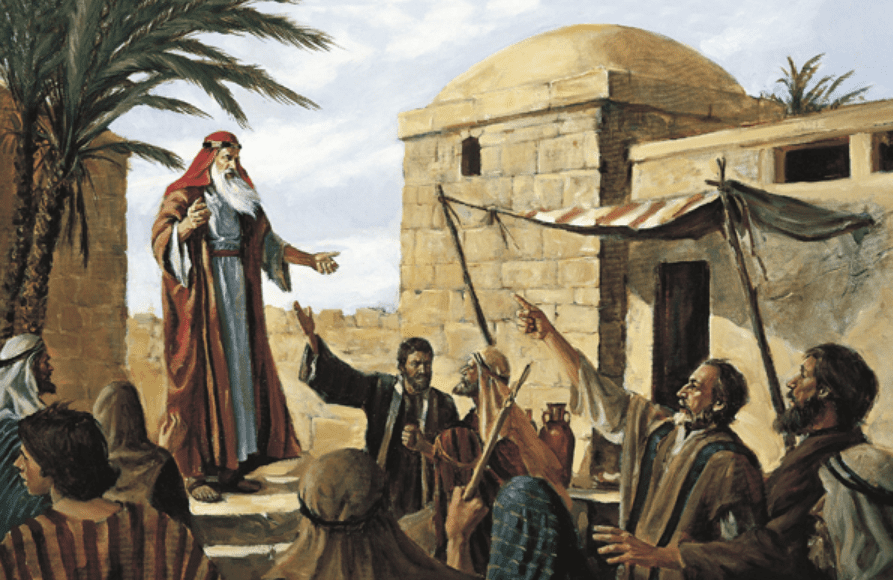 When Lehi Left Jerusalem: A Plausible Hypothesis from Jeff Chadwick

Cover image: Lehi Prophesying to the People of Jerusalem, by Del Parson.

A frequent question and criticism of the Book of Mormon involves Nephi’s statement at the beginning that Lehi had a vision in the first year of the reign of King Zedekiah. Afterwards, when Lehi and his family have left Jerusalem, Lehi prophecies that the Messiah would be born 600 years later (1 Nephi 10:4, repeated in 1 Nephi 19:8 and 2 Nephi 25:19, and confirmed in 3 Nephi 1:1, 9–19). Since it has long been known that Zedekiah’s reign began in 597 B.C., and since it is generally accepted that Christ’s actual birth was around 5 B.C., the 600-year prophecy poses an obvious problem. Viewing the 600-year prophecy as a rounded approximation seems inadequate, given the specificity of the text.

Several approaches have been taken to deal with the 600-year prophecy, including an appeal to a 360-day year of the Mesoamerican calendar or a 354-day lunar calendar, but Professor Jeffrey R. Chadwick of BYU has what seems to be a superior treatment. In his newly published “Dating the Departure of Lehi from Jerusalem,” BYU Studies 57/2 (2018): 7-51, Chadwick proposes that when the Egyptians killed Josiah in battle in 609 B.C. and later Jehoiakim on the throne, the rightful heir was Zedekiah and many faithful Jews might have naturally viewed the Egyptian appointment as illegitimate. Indeed, Jehoiakim was strongly denounced by Jeremiah.

In the minds of the Jews of that day, the rightful reign of Zedekiah had already begun, though he would not ascend to the throne for several more years. Chadwick’s proposal seems to neatly resolve several issues and provides for a reasonable time for Lehi to minister in Jerusalem before he had to flee for his life. It also fits well with some of the social and political realities that might have made later travel too risky. He considers a wide variety of details and concludes that the Book of Mormon account is remarkably consistent with what we are learning about Israel in that era.

One quibble is that Chadwick insists that the River of Lemuel must have been a wadi that only temporarily had flowing water, otherwise a perennial stream (such as the excellent candidate found by George Potter) would have attracted a large settlement and would not have been available for any random family to wander up to and use. But remote, hard-to-find locations can remain largely uninhabited, as we see with Khor Kahrfot/Wadi Sayq, the leading candidate for Bountiful which remains substantially uninhabited in spite of having the largest freshwater lagoon in the Arabian Peninsula. When there are other sources of water in a region, a remote and difficult location won’t necessarily attract a crowd.

Had Joseph been the brilliant Bible scholar he is sometimes required to be, he would have known that Zedekiah’s reign began in 597 B.C. The 600-year prophecy would have at least been dialed down to 597 years. The 597 B.C. was well-known as the beginning of Zedekiah’s reign in Joseph’s day is illustrated in a printing of the Bible with commentary showing the date 597 B.C. at the top of the pages for Jeremiah 27. The source is Thomas Scott, The Holy Bible Containing the Old and New Testaments According to the Authorized Version with Explanatory Notes and Practical Observations, vol. 3 (Boston: Samuel Armstrong, 1823), available at Google Books; https://books.google.com/books?id=jaJOAQAAIAAJ&pg=RA1-PA323.

The commentary explains that there may be a scribal error in Jeremiah 27:1, for that verse speaks of the beginning of the reign of Jehoiakim, but the rest of the chapter is addressed to Zedekiah.