What Was the Nature of Satan’s Premortal Proposal? | Meridian Magazine 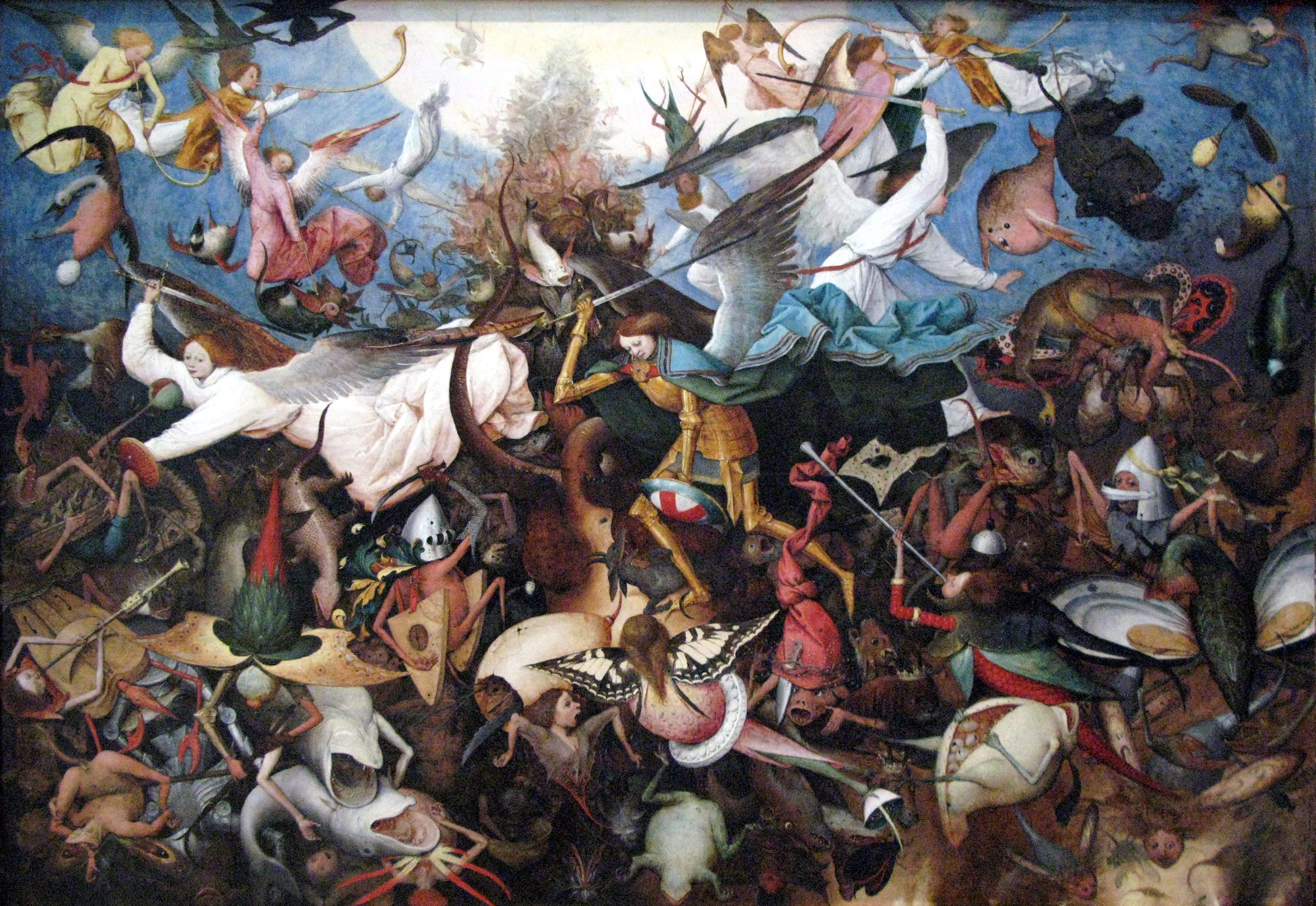 What Was the Nature of Satan’s Premortal Proposal?

Editor’s Note: The following is an Old Testament supplement for Gospel Doctrine Lesson 2:“Thou Wast Chosen Before Thou Wast Born” (Abraham 3; Moses 4:1-4)

Cover image: “The Fall of Rebel Angels” by Peter Bruegel.

Question: What was the nature of Satan’s proposal to “redeem all mankind”?[i] How did he intend to “destroy the agency of man”?[ii] Was his proposal feasible?

Summary: It is often assumed that the gist of Satan’s premortal proposal was that he would “‘save’ all of the Father’s children by forcing each to obey the Father’s law in all things.”[iii] In light of what the Book of Mormon teaches and Joseph Smith’s statements on the subject, these assumptions should not be taken for granted. Closer study offers a more likely alternative: namely that Satan put forth a proposal to “save … people in their sins,”[iv] notably including the sons of perdition. Moreover, in the Book of Mormon, Satan’s proposal to “destroy the agency of man”[v] is not described as an impossible attempt to force people to obey but rather as a scheme to prevent humankind from experiencing a mortal probation after the Fall.

Questioning our assumptions. Because we know so little about the details of the “war in heaven,”[vi] it is not surprising that Church members have gradually filled in details of the story as best they can on their own. In doing so, a set of basic assumptions about Satan’s premortal plans and doings have become widely accepted. We will examine two questions relating to these commonly held assumptions:

“I will redeem all mankind.” The best-known version of a commentary by Joseph Smith on Satan’s premortal intentions comes from a discourse recorded in rough notes within William Clayton’s official diary and later smoothed out by Church historians:[ix]

The contention in Heaven was — Jesus said there would be certain souls that would not be saved; and the Devil said he could save them all, and laid his plans before the grand council, who gave their vote in favor of Jesus Christ. So the Devil rose up in rebellion against God, and was cast down, with all who put up their heads for him.

A correct understanding of this passage depends on how the term “certain souls” is interpreted when it mentions that “certain souls … would not be saved.” By comparing William Clayton’s journal entry with the notes of others who heard Joseph Smith’s discourse it becomes clear that the “contention in Heaven” was not about whether ordinary souls would make it to heaven if no one forced them to be obedient in all things. Rather, it was about Satan’s claim that he could save even those who committed the unpardonable sin — in other words, those who the the premortal Jesus Christ Himself had said He could not save. According to the notes in George Laub’s journal, Joseph Smith said that Satan “boasted of himself saying, ‘Send me, I can save all, even those who sinned against the Holy Ghost.’”[x]

Contradicting Satan’s boast, Wilford Woodruff recorded that Joseph Smith taught: “Jesus Christ will save all except the sons of perdition.”[xi] In other words, the Atonement of Jesus Christ would guarantee that all except the sons of perdition would be “resurrected to [at least] a telestial glory, escaping the second, i.e., spiritual, death.”[xii]

Apparently, the Prophet taught that when Satan proposed to “save all,” he was not thinking broadly, as Jesus did, about how to help the mass of humanity achieve salvation, but rather was focused on concocting a narrow, selfish, and farfetched proposal whose stated objective was to “save” the sons of perdition. Seemingly trying to do away with the need for an Atonement, Satan “sought… to redeem… all in their sins.”[xiii]

We will return to this subject after we take a look at the second question.

“Satan … sought to destroy the agency of man.” It is often taught that the means by which Satan’s proposal would “‘save’ all of the Father’s children” was “by forcing each to obey the Father’s law in all things.”[xiv]

Yet, there are at least two reasons why the idea that Satan intended to destroy agency through forced obedience seems unlikely. For one thing, the principle of agency is part of humankind’s eternal nature,[xv] and continues to operate even in the most coercive situations imaginable.[xvi]

For another thing, it is evident that salvation cannot be obtained through mere abstinence from sin, nor from the completion of some number of outwardly benevolent actions. As C. S. Lewis wrote: “We might think that God wanted simply obedience to a set of rules; whereas He really wants people of a particular sort.”[xvii]

A more likely alternative. Is there a more plausible alternative than forced obedience by which Satan might have sought to destroy agency and thus “save” God’s children “in unrighteousness and corruption”?[xviii]

Satan’s efforts to destroy the agency of man and to “save” him in his sins seem to have been briefly put into motion through his efforts to get Adam and Eve to take of the fruit of the Tree of Life immediately after taking of the fruit of the Tree of Knowledge. As Alma explains: “For behold, if Adam had put forth his hand immediately, and partaken of the tree of life, he would have lived forever, according to the word of God, having no space for repentance; yea, and also the word of God would have been void, and the great plan of salvation would have been frustrated.”[xix] There would have been “no probationary time”[xx] — hence no opportunity to exercise agency — before the spirits of Adam and Eve would be forever united with an immortal body.[xxi]

Happily, God’s “wisdom is greater than the cunning of the devil.”[xxiv]

In the Garden of Eden, Satan acted in direct defiance of God’s instructions, as he had in the premortal councils. His objective was not simply to tempt Adam and Eve; rather it was to provide a Luciferian form of universal “redemption” which would have in fact have severely limited the potential of humankind for progression, cut off their opportunities for the exercise of agency, and precluded the possibility for spirits to be embodied and saved from his dominating influence. Mormons see the goal of humankind’s eternal progression through the exercise of agency, the continuation of seed, and the worthy partaking of eternal life as fundamental to God’s plan. By opposing these objectives, the “son of the morning”[xxv] became the enemy of God.

For more detailed analysis relating to Satan’s strategy in the premortal world and the Garden of Eden, see J. M. Bradshaw, et al., Mormonism’s Satan. The article is available as a free pdf download at www.TempleThemes.net.

For a scripture roundtable video from The Interpreter Foundation on the subject of Gospel Doctrine lesson 2, see https://www.youtube.com/watch?v=cmcP6FOwTt8.

Bradshaw, Jeffrey M., and Ronan J. Head. “Mormonism’s Satan and the Tree of Life (Longer version of an invited presentation originally given at the 2009 Conference of the European Mormon Studies Association, Turin, Italy, 30-31 July 2009).” Element: A Journal of Mormon Philosophy and Theology 4, no. 2 (2010): 1-54.

[xi] J. Smith, Jr., Words, 7 April 1844, p. 347, spelling and punctuation standardized. Likewise, George Laub records Jesus as saying that “He could save all those who did not sin against the Holy Ghost and they would obey the code of laws that was given” (E. England, Laub, p. 22).

[xvii] C. S. Lewis, Mere, 3:2, p. 77. Compare D. H. Oaks, To Become, p. 32; H. W. Nibley, Meaning of Temple, p. 26; J. E. Faulconer, Self-Image. Malcolm Muggeridge ironically observes that the commandments “are, after all, relatively easy to keep, especially if, as an Anglican bishop once suggested, they are regarded as an examination paper, with eight only to be attempted” (M. Muggeridge, Jesus, p. 114).

There is a good article on this topic in the March 2015 Ensign. The author quotes President J. Reuben Clark, "First Counselor in the First Presidency, suggested two main possibilities for what Satan proposed to do and reminded us that neither would have worked. He explained: “As I read the scriptures, Satan’s plan required one of two things: Either the compulsion of … man, or else saving men in sin. I question whether the intelligence of man can be compelled. Certainly men cannot be saved in sin” Although neither of these possibilities would have worked, we see elements of each in Satan’s efforts and tactics today." Neither would have worked and guessing as to which perversion of Heavenly Father's plan Satan presented is just that, guessing and is not doctrinal.

Satan wanted all man kind, not just Adam and Eve.