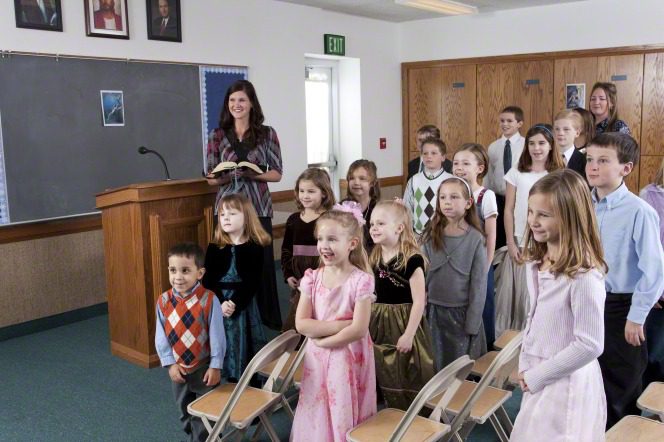 We attend a little country church in our rural community. I have been involved in many community events and have taken on lots of assignments that have come from the congregation leaders. Mostly I have worked in scouting.

On Tuesday of one week, I had been asked by the congregational leaders to take a new assignment with the young men. The announcement would be given in the church meeting on Sunday, and as usual, everyone in the congregation would be given a chance to either support or express their concern about the assignment. But as I was coming into the church that Sunday, one of the congregational leaders stopped me and told me they had changed their mind. They had felt inspired to ask me instead to be the person who would teach the children music.

The members of our little country church have certain idiosyncrasies, and one of them is a strong distinction between what men do and what women do. A man teaching the children music would be like assigning him to play on a female sports team. But I had been taught by my father that if a call came from church leaders, a person should accept it and heaven would help him overcome his inadequacies. So, with great apprehension, I accepted.

I wondered what the members of the congregation would say. I was particularly nervous about the assignment since my wife was a music major in college, and I didn’t even know if I was on pitch half of the time. The only thing going for me was that I loved children.

It would be a full week before it would be announced to the congregation. That just gave me more time to worry about it. I wondered what my children would think when they learned that their dad, who couldn’t sing right half of the time, would be teaching music. I talked to my wife about it, but we didn’t mention anything to our children other than to tell them that I was getting an unusual assignment.

When the next week came, and the announcement was made, it went worse than I expected. Instead of the solemnity that usually exists with these announcements, the congregation burst into laughter, starting with my own children. It was to such an extent that the head congregational leader, whom we call “The Bishop,” had to pause the meeting for everyone to calm down. Once the laughter stopped, the meeting was restarted, only to have everyone once more burst into laughter. This time The Bishop spoke to the congregation about how sometimes they, the leaders, felt directed to do unusual things.

No one expressed any concern about the assignment, so it was to officially start the next week. I thought it might be good for me watch what the current music teacher did. But the minute I stepped into the children’s meeting room, one of the ladies in charge handed me the song book.

I shook my head and handed it back. “I don’t start until next week. I just came to watch.”

She shoved the book back to me. “We don’t have anyone for you to watch. So get up and lead.”

Nothing I said would change her mind, and she would not accept no for an answer, so I soon found myself trembling in front of forty children. We sang a song that I have known since I was a boy, but in my flustered state, I mixed half of one verse with half of another. I finally stopped the music.

“Maybe we should try that again,” I said.

One little eight-year-old girl raised her hand. When I called on her, she asked, “Are you going to be our new music teacher?”

The little girl rolled her eyes. “That really stinks,” she said. “You mess things up.”

And with that, I thought, “I hope heaven has more confidence in me than I do.”

I had a similar experience being called as Jr. Primary Chorister in a ward when I had only 3 months more there before going to Bogota, Colombia, due to my husband's military assignment. I had absolutely no skills to do that and didn't feel my service would be worth while. I prayed about it and received the inspiration: "Do you suppose you need to learn to lead music before going to Colombia?" I accepted the calling and learned the basic skills. When we arrived in Colombia, I found that very few people knew how to lead music correctly and I taught classes throughout the branches. Music direction improved throughout the area and brought them much joy. I learned from that never to question a calling from the Lord.

I was called to be primary chorister once, although we didn't have the gender stigma I was not fond of children and very apprehensive. It became one of my favorite callings in the church, and I am grateful for the experience and all that it taught me. Good for you! My only advice would be to learn from others but don't be afraid to be yourself - there is no one right way to do the calling, and it will work best if you allow your unique personality to shine.