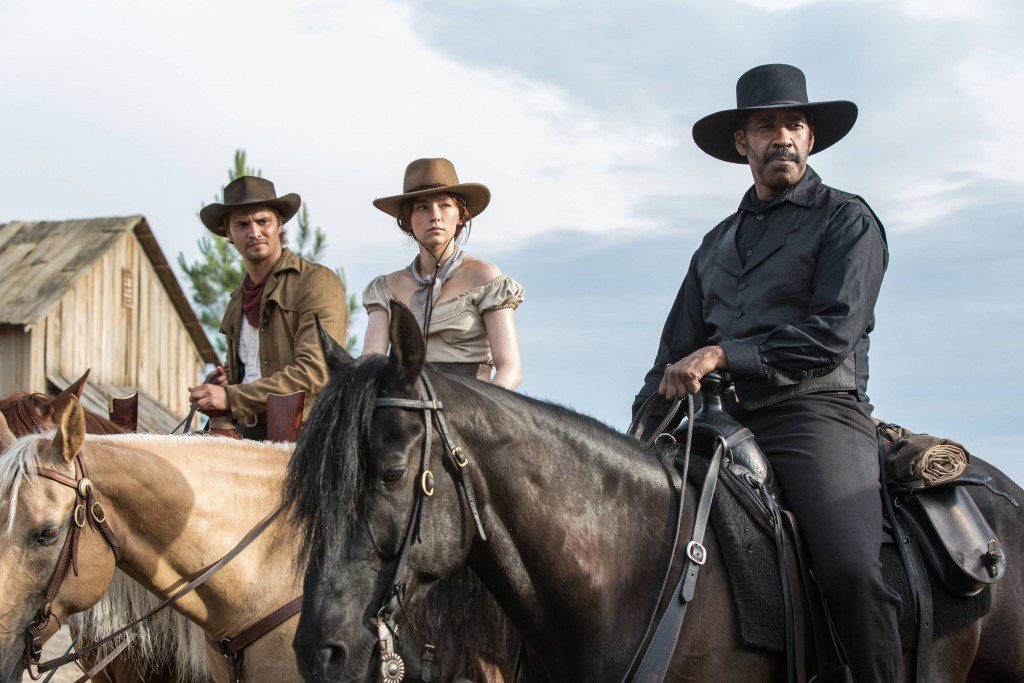 WHAT’S THE MAGNIFICENT SEVEN ABOUT?

A town hires seven warriors to defend them from an oppressive tyrant. Remake of the 1960 film (which was itself a remake of Seven Samurai). Pre-order it here.

Denzel Washington and Chris Pratt lead a diverse cast of heroes in this hard-hitting Western. Only a few characters have any depth; the supporting players and the villain are well-played but underdeveloped. Still, the cast has good chemistry. The story is clean and straightforward, but what it lacks in sophistication it makes up for with satisfying good-vs-evil conflict and gorgeous vistas. Director Antoine Fuqua knows how to shoot and edit a visceral action scene, with the sound mix adding real punch. I also appreciated the positive depiction of people of faith. Listen for the last score by the late, great composer James Horner (BraveHeart, Titanic, The Mask of Zorro).

The Magnificent Seven is rated PG-13. There are a handful of moderate profanities and a pair of innuendos (a man refers to himself as the “world’s greatest lover” and another makes a vulgar remark about the attention a woman is showing his friend). A woman’s dress shows some cleavage. Characters drink and smoke. There is plentiful action violence, with persons killed by gunfire, arrow, hatchet, knife, and dynamite. (If you’ve concerns about content, consider watching on VidAngel when it comes out).

Selflessness is at the heart of both heroism and redemption. The greatest love is to give your life for another (see John 15:13). The wicked will get their comeuppance (see 1 Nephi 10:20).

If you enjoyed this version, check out the original Magnificent Seven (along with Seven Samurai and the other films it inspired, Three Amigos! and A Bug’s Life).

I wished I had walked out. I was distracted by one of the main character's cleavage when every other pioneer woman was dressed up to their necks. Also the amount of killing at the end was over the top. It just went on and on. This is not an accurate review.

I walked out of the movie after the vulgar comment about the woman. It was the straw that broke the camel's back. I felt like it was too violent, and that pushed me over the edge.