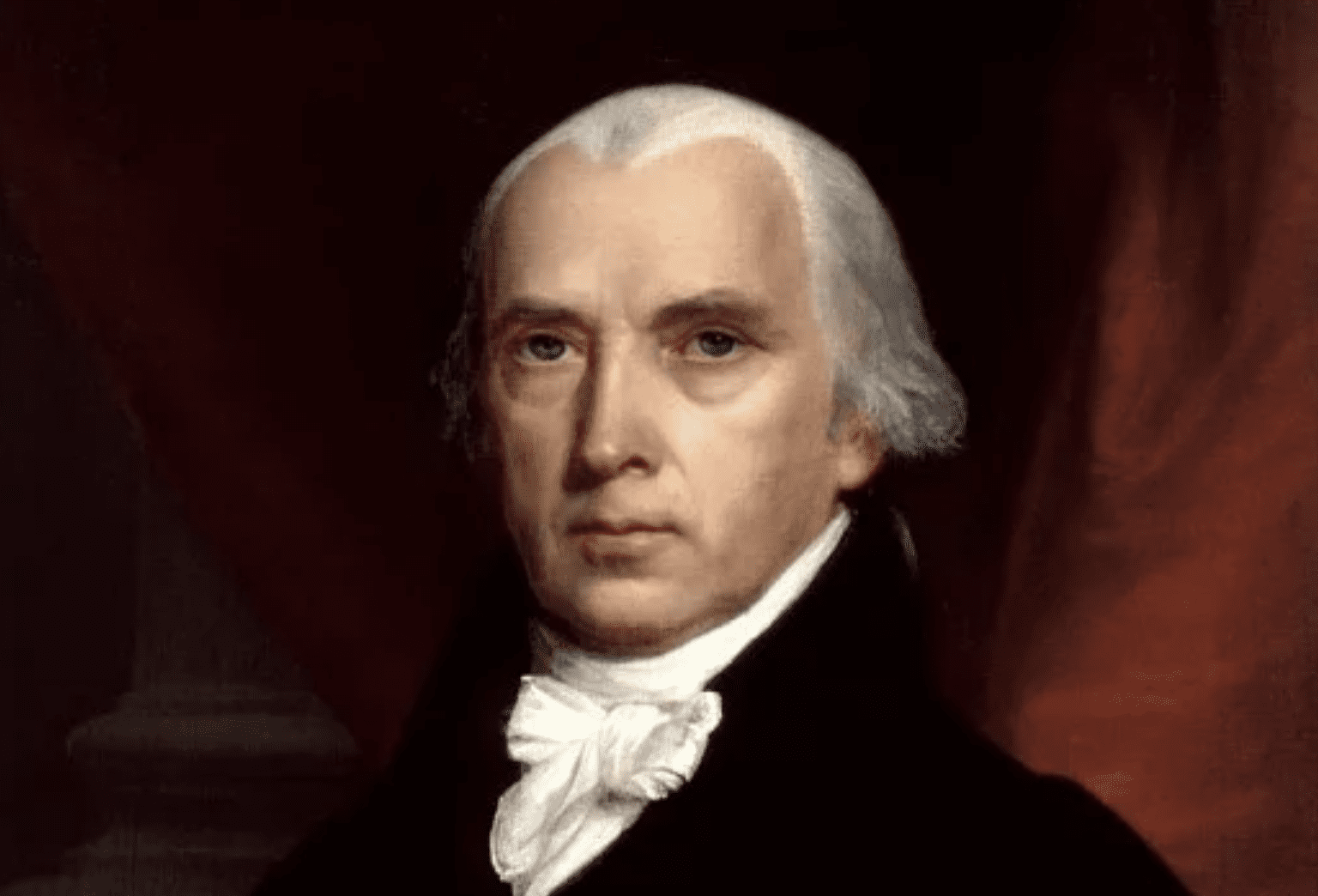 The joy I found in researching and writing about James Madison, who is widely recognized as the Father of the Constitution and the Bill of Rights, was part of an odyssey, “a long and eventful or adventurous journey or experience,” an experience that slowly but indelibly is written on one’s soul. You may find the story interesting.

As a lawyer, I tend to look at issues from two perspectives – procedurally (process) and substantively (reasons). Process and substance are often synergistic, but it makes sense to look at most issues from each perspective. This is certainly true of my generation-long decision to research and write about James Madison.

The process of studying the life and accomplishments of James Madison began in earnest while I was a graduate student at the University of Pennsylvania. I had a nice cubicle, hidden away in the stacks on the third floor of the library. As fate, or heavenly coincidence, would have it, the nearby shelves included one of the greatest biographies ever written regarding Madison’s life – William Rives’ two-volume set, “History of the Life of James Madison.” One afternoon, as studying law was becoming tedious, I sought a respite by foraging the shelves for engaging reading material. I was drawn to and started reading the Rives biography, which was natural, given that I had studied the intellectual history of the founding as an undergraduate. I was quickly enthralled, which turned a short respite from studying law into a deeply meaningful life-long endeavor.

Indeed, as I learned more about Madison’s thought and commitment to the constitutional rule of law and the right of conscience, the study of Madison’s contributions began to shape my dissertation, which was ultimately published as Public Prayer and the Constitution: A Case Study in Constitutional Interpretation. In the dissertation-turned-book, I examined what I referred to as the Madison and Story views regarding religious liberty.

Given the importance of religious liberty, I wanted to be sure that the substance was acceptable to the Lord and merited publication in book form. I went to the Temple to determine whether I should publish my dissertation. While at the Washington, D.C. Temple, words came to mind: “go read Doctrine and Covenants, Section 134.” I returned home and promptly read and carefully outlined Section 134. To my astonishment, Section 134 was wholly consistent with Madison’s, but not Story’s, view of the First Amendment and religious liberty.

The book was published. Not long thereafter, Justice Clarence Thomas cited a portion of the Madisonian view of the establishment clause in a Supreme Court opinion. A few years later, the Brigham Young Law Review published, “James Madison, John Witherspoon, and Oliver Cowdery: The First Amendment and the 134th Section of the Doctrine and Covenants,” which compared the 134th Section with Madison’s view regarding religious liberty.

Through the intervening years, I kept feeling a strong urge to write more about Madison, to make his life and views more accessible to the broader reading public. Each time I started to write some project at work or health issue (I began my battle with cancer in 2011) intervened. Nevertheless, I managed to get 200 pages of a scholarly book written. I then received inspiration that I should write not for scholars but for the general public. That proved to be a challenging task, taking me out of my academic comfort zone. As I shared my struggles with one of my sons, he simply counseled, “Just prayerfully write about Madison as the Lord knows him.” While writing from such a perspective was daunting for many reasons, not the least of which is my own very limited capacity, that counsel from my son was ultimately liberating. The book began to flow when told as the story of a wise man called to do an important work. Nevertheless, distractions continued to slow the work.

Finally, after receiving a call from President Matt Holland at Utah Valley University, urging me to apply for the Directorship of the Center for Constitutional Studies, distractions began to melt away. Matt suggested that I strongly consider cutting my pay in half and doing something important – move from sports law and policy to constitutional law and history. President Holland’s words rang true, and I accepted the directorship at Utah Valley University, which provided me with more freedom to write about Madison. Thus, what had taken years getting started was finished in a little over a year. I completed a six hundred plus page manuscript that turned out to be two books about Madison. The first, JAMES MADISON: The Father of Religious Liberty, was published early in 2019. The second, JAMES AND DOLLEY MADISON: An Unlikely Love Story, is now being edited.

While I was working on the books, I received regular encouragement and counsel from scholars and Church leaders. One piece of encouragement helped me see Madison more clearly. I had written about a broad right of conscience in numerous law review publications. In response to those publications, a very enlightened friend gently criticized my work and encouraged me to come to understand the difference between the right of religious conscience and a more generalized right of conscience. That suggestion opened the window to better understanding of what Madison meant when he said, “conscience is the most sacred of all property, other property depending in part on positive law.” For Madison, the sacred right of religious conscience was and is the pre-eminent natural right, a gift from God, and, as such, takes precedence over government action taken in the interests of the general public good.

I began to appreciate, as Madison did, that the taking of the right of religious conscience is the taking of one’s soul, something that no just government or people should ever be permitted to do. It became clear why the deprivation of religious conscience vexed Madison more than all else. Sadly, Madison never found a church that he could call his own, but he did become the principal author of the First Amendment and of religious liberty, our first freedom.

As a substantive matter, there is so much more to Madison’s story. From his graduate study in Hebrew to his continuing battle to adopt and ratify the Constitution and the Bill of Rights, both of which have Madison written all through them, getting to know Madison was one of the great joys of my life. However inadequately, it is that noble life of our nation’s great lawmaker that I have endeavored to share with others in my books, JAMES MADISON: The Father of Religious Liberty, which is now available, and JAMES AND DOLLEY MADISON: An Unlikely Love Story that Saved America, which should be in books stores next year. In the latter book, Madison is joined by his unlikely soulmate, Dolley Madison, our nation’s first First Lady, in courageously guiding the American Republic through its first generation and into what historians refer to as “the era of good feelings.” It is my sincere hope that readers of those books will come to appreciate Dolley for her courage under fire and James, the little man, who was frail and only 5’4” tall, and yet played the lead in authoring the Constitution and Bill of Rights – the “still small voice” that should speak to all generations, as John Quincy Adams stated in his eulogy of Madison.

Rodney K. Smith directs the Center for Constitutional Studies at Utah Valley University and author of JAMES MADISON: The Father of Religious Liberty.

Thank you so much for guiding me to read your excellent book! I look forward to learning more about James Madison in an era when everyone else is deifying Alexander Hamilton. We are so blessed and need to fight for the vision of the Founding Fathers.

I don't think people know how important James Madison was in the history of the USA. Today it seems as though there are so many forces against the free exercise of religion that I think Heavenly Father inspired and revealed to James Madison the importance of freedom of religion.