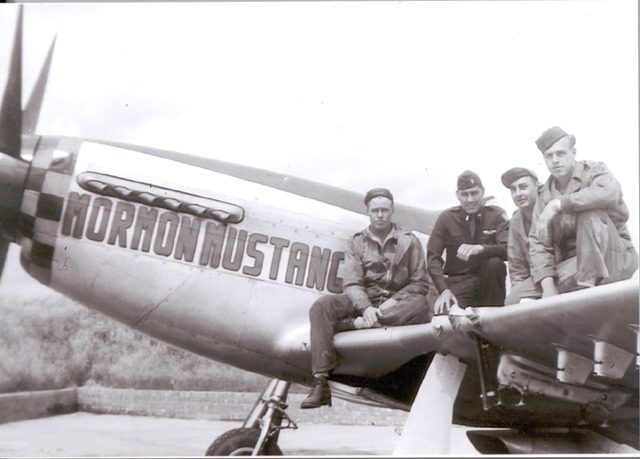 Latter-day Saints have a rich heritage of patriotism, going all the way back to the sixth Article of Faith. Many have pledged their lives in military service as a part of that patriotism, and the Saints at War Project has collected the stories, photographs, and artifacts of their experiences. Here are just a few.

All photos courtesy of the Saints at War Project.

Stanley Shultz, an officer during the Vietnam War, received a jeep for his use. Dismayed over the graffiti that decorated it, he cleaned it up and gave the jeep its own distinctive Latter-day Saint identity by painting “Mahonri Moriancumer” across the front. Courtesy of Stanley Schultz.

A South Vietnamese woman is confirmed.

A serviceman is baptized in a lagoon off Saipan during World War II in 1945.

Elder Harold B. Lee (right) served as Committee Chairman for the LDS Servicemen’s Committee during the Korean War. He was given a uniform and made “Brigadeer General” for the day. This 1954 photo of him standing with Mission President Hilton Robertson (left) was taken on Elder Lee’s visit to Korea, where he provided support to the servicemen, as well as heightened awareness of the Church in Korea.

To see more of these amazing wartime images, CLICK HERE.

As an avid history buff, I loved these photos! They show that in spite of the horrors of war righteous people can make a tremendous difference. They remind me of the scripture in Alma 50:23. In the midst of a horrific war, ".... there never was a happier time among the people of Nephi, since the days of Nephi, than in the days of Moroni, yea, even at this time..."