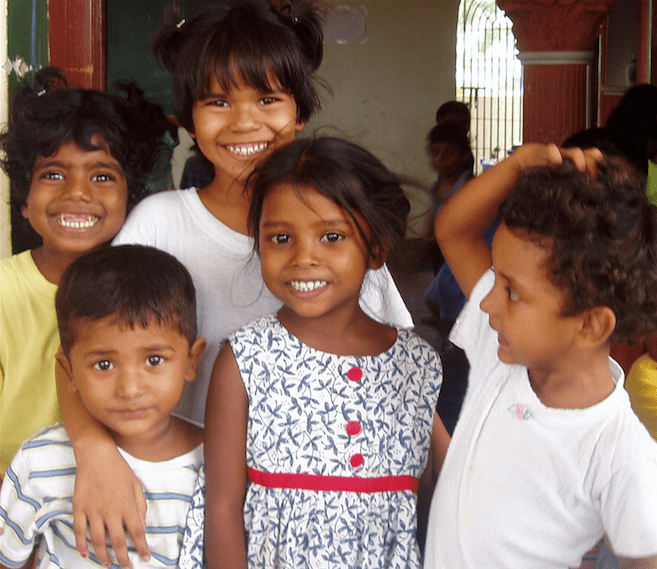 Rejected by a Mother, but Not Forgotten by a Father in Heaven

Last month I asked Jennifer to tell me her story because it was so remarkable. I thought it would be wonderful to have it recorded so that people could hear Jennifer telling her own story.

Jennifer is a stunningly beautiful student at Rising Star Outreach. She is ready to graduate this year.   Looking at this beautiful girl, whose eyes shine with the excitement of living, one would never guess at what her story had been.

When I met Jennifer, she was already stunning as a baby.   She had the biggest and most expressive brown eyes I had ever seen on a baby.   Her skin was a beautiful rich creamy brown—the color of Southern Indians.   It was quite jarring, however, looking at that beautiful face, to realize that there was one small flaw in that creamy skin—a small area on her nose where her skin was losing its natural pigment and had turned white. Her right shoulder was also disfigured by this bizarre whiteness. It was quickly apparent to us that Jennifer had the first stages of leprosy, a stage that is called dry leprosy.

Fortunately Jennifer’s leprosy was discovered early, before any disfiguring disabilities had occurred. At this point, leprosy is typically easy to cure.   We told Jennifer’s mother that we would return with proper medical treatment for her daughter. In Jennifer’s case the leprosy was easily cured with one packet of a multi-drug therapy put out by the World Health Organization. Ironically the packet cost only $1.50, yet made such a drastic change in little Jennifer—the dread disease was arrested!

Jennifer’s trials were not over, however. Life in a leprosy colony can be very challenging for mothers. At one point Jennifer’s mother became overwhelmed by the challenges of trying to provide for herself and a young daughter as well. Eyes downcast, Jennifer softly and hesitatingly continued her story,

“One day, my mother decided she didn’t want me any more. She threw me into a dustbin and said, ‘We don’t want to live with you any more.’”

Tears streamed silently down Jennifer’s face as she recalled this dark time of her life. She began to sob. No matter how much suffering we encounter in India, stories like these are like a punch to the gut. Tears streaming down my own face I put my arms around Jennifer and gently pulled her to me, trying to mitigate this pain.

Dustbins in India are large outdoor heaps of trash. Very frequently dogs tear apart whatever they find on these trash heaps as they fight for their own existence. Tiny little Jennifer was at risk for her life. She began to scream in terror.

Rejected by her earthly parents, little Jennifer was still not alone. Her loving Heavenly Father knew of her jeopardy. Within moments her grandfather “happened” to pass by this very dustbin as he was returning from begging in the village. He heard the frantic cries of a terrified child. His limbs had been crippled by leprosy. Even though he had difficulty walking, he followed the desperate cries and struggled to climb to the top of the putrid trash heap. He was stunned to find his own dear granddaughter there. He rescued her. Gathering her up into his deformed arms he stumbled back down the mountain of trash and took her to his own humble home.

This grandfather who was very disabled from leprosy, but enabled by love, tried his best to care for this abandoned child. The challenges were huge. Struggling to provide for her, he approached the director at Rising Star Outreach to see if there was any possibility of admitting her to our school, to our Lower Kindergarten program. We had a large waiting list by this point, but most concerning to us was that she was only three years old.

Miraculously a spot opened up, and given the unusual circumstances, Jennifer was admitted to the school, where she lived full time.

Jennifer blossomed at the school. She became an excellent student and a great leader as she grew.   Today she is a beautiful young woman ready to graduate.

I was in Chennai to visit Rising Star a couple of months ago and was very surprised to see Jennifer at Church on Sunday. We have a very firm policy that we do not convert children at Rising Star. If we were to do so, we would lose our license.   Most of our students come from Hindu families. We acknowledge God on our campus in prayers every day, but that is not a problem since every religion refers to a supreme power as God. Other than that, we do not preach.

I asked Jennifer how she came to be at Church. She told me that she had noticed there were several kids at the school who seemed to be happier than the rest. She consciously worked at becoming their friends. They told her their happiness centered in their religion and its teachings about a loving Heavenly Father. She asked if she could go with them to Church on Sundays.

Jennifer told me that the first time she walked into the Church and heard people calling each other “Brother” and “Sister”, she was filled with a sense of love and joy. Rejected by her own family, more than anything she wanted to belong to this family! But this created a problem. At Rising Star we couldn’t allow her to convert without the approval of her parents.

We had to go back to the mother who had rejected her long ago. Because we require parents to take responsibility for their children’s spiritual welfare, her parents had to make the request that Jennifer take the discussions.

She told me that she wants to be an eye surgeon so that she can treat the many leprosy patients who suffer from eye problems. I laughed and told her that leprosy patients wouldn’t have much money to pay her. “Oh no Auntie”, she said. “ I don’t want money—I just want to be able to help them in their suffering.” I wanted to pick up this beautiful girl and hug her!

I have so many friends that struggle with individual challenges. Some of them, in the desperateness of their struggles, are convinced that God has forgotten them. But I know that God forgets no one. He noticed a little child in the slums of India, on top of a heap of steaming, rotting trash. He reached out to save her. He continues to bless her life.

God knows you. He knows your struggles. If He could save a child in a leprosy colony in India, He can reach out and heal your wounds as well.

JewelFox, Just maybe it was Heavenly Mother who to;d Heavenly Father about this child. I do not want to detract from the message of inspiration and hope the story is about. Hope you will fell that also.