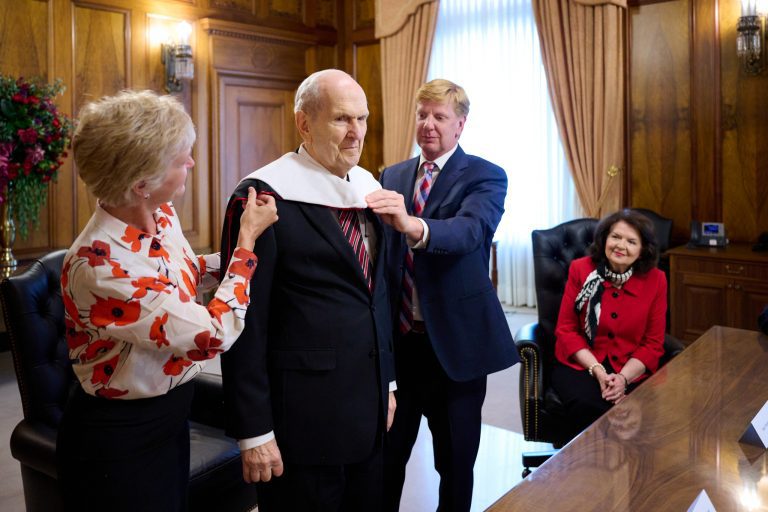 In May of this year, President Russell M. Nelson of The Church of Jesus Christ of Latter-day Saints was named as a recipient of an honorary doctoral degree during an all-virtual commencement for the University of Utah. On Tuesday, June 15, thanks to the easing of local COVID-19 restrictions, university officials delivered the honorary degree citation and doctoral hood during an in-person visit in the Church Administration Building on Temple Square.

The degree citation notes the prophet’s “significant contributions to medical science” and his “vast accomplishments as a scholar, educator, and religious leader” around the world. Former Presiding Bishop H. David Burton, who serves on the university’s board of trustees, read the citation to those gathered for the occasion before it was given to President Nelson.

Prior to his call to be an Apostle in 1984, President Nelson was a heart surgeon revered and respected the world over. He performed the first open-heart surgery in Utah in 1955. He served as president of the Society for Vascular Surgery, a director of the American Board of Thoracic Surgery, chairman of the Council on Cardiovascular Surgery for the American Heart Association and president of the Utah State Medical Association. He authored numerous chapters in medical textbooks and other publications.

As a physician, President Nelson was perhaps best known for his part in the development of an artificial heart and lung machine small enough to function in an operating room. Made possible by the invaluable support and encouragement of his first wife, Dantzel, it was an achievement that heightened his appreciation for the gift of life.