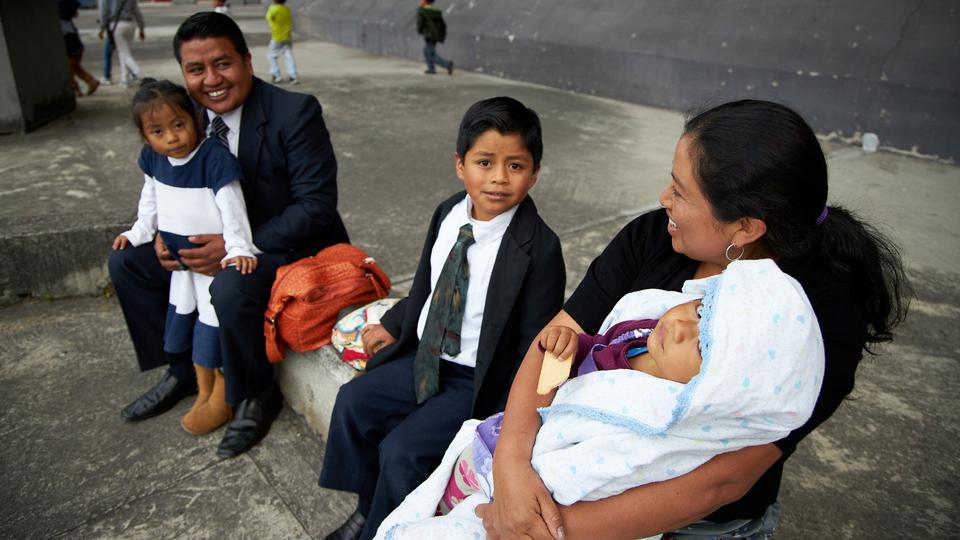 Thousands of Latter-day Saints gathered for an evening devotional in Quito, Ecuador, Monday to hear their prophet remind them of their responsibilities to prepare for a glorious afterlife with their families.

President Russell M. Nelson told Latter-day Saints gathered at General Rumiñahui Coliseum in Quito, a meeting that was broadcast to all Church congregations in Ecuador, that each of them is responsible for developing faith in God and keeping His comandments.

Obtaining what Church doctrine calls “exaltation” (“the highest state of happiness and glory” in heaven, President Nelson said) requires righteous decisions made in families. The prophet said God exalts those couples who keep His commandments, which includes being married in one of the faith’s temples and creating a home brimming with love toward each other and their children.

“The home must be God’s laboratory to love and serve,” President Nelson said. “That’s where a husband loves his wife, a wife loves her husband, and parents and children love each other. Our Heavenly Father wants husbands and wives to be faithful to each other in a home where children are considered an inheritance of the Lord. Thanks to God’s great plan of happiness, families can stay together forever. Exaltation is a family affair!”

The capital and largest city in Ecuador is the third stop on the prophet’s five-country Latin America ministry, which has included visits to Guatemala and Colombia. President Nelson is traveling with his wife, Wendy, and Elder Quentin L. Cook of the Quorum of the Twelve Apostles and his wife, Mary.

Sister Nelson shared personal experiences with answers to prayers at key times in her life. She then encouraged the gathered Saints to pray daily with deep and serious conviction—and to keep praying until the Lord blesses them.

Elder and Sister Cook also touched on the theme of creating strong families. They encouraged the Ecuadorian Saints to do all they can in teaching their children and loving each other in the home — and especially to not give up when the results aren’t immediate.

“I don’t want us to get discouraged if it doesn’t work out the way we planned. And sometimes it won’t,” Sister Cook said after describing a time when a Cook family scripture activity did not go as planned. Their 3-year old son played the role of Moses, while Elder Cook was pharaoh. “Moses kept saying, ‘Let my people go.’ And he kept hearing, ‘No. No. No.’ He took the law into his own hands. He punched his dad in the nose. We fell apart. But pharaoh let the children of Israel go. And that was the end of family home evening.”

The lesson for all of us, Sister Cook said, is to persevere through the unexpected difficulties and continue to teach children the words and ways of God.

Elder Cook said diligence in creating loving and godly homes is critical because “the culminating doctrinal concept is the eternal significance of the family. The family is ordained of God. It is the most important unit in time and eternity.”

“Regardless of the challenges you face, do not become discouraged,” Elder Cook added. “Please understand that faith in the Lord Jesus Christ and keeping His commandments is and always will be the defining test of mortality. … God loves all his children. He wants all of them to return to Him. He desires everyone to be in tune with the music of faith. The Savior’s Atonement is a gift for everyone.”

The senior Church leaders will participate in a devotional Wednesday evening at Tecnópolis Arena in Buenos Aires.

This is the prophet’s fifth visit to Ecuador. His first trip was in 1997 as a member of the Quorum of the Twelve Apostles. President Gordon B. Hinckley traveled to the country in 1999 to dedicate the Guayaquil Ecuador Temple.

The senior Church leaders have visited Guatemala, Colombia and Ecuador since they began their Latin America ministry on August 24. Other member devotionals and outreach meetings with government, religious leaders and media will be held in Argentina and Brazil. The Latin America ministry will conclude on September 2.

Ecuador is home to approximately 250,000 Latter-day Saints. The first missionaries arrived in the country in 1965. There are now five missions and one temple in the South American country. Ground was broken for Ecuador’s second temple, the Quito Ecuador Temple, in May. The Guayaquil Ecuador Temple was dedicated in 1999.

President Nelson is the 17th president of the Church. Since January 2018, he has traveled to Europe, Africa, Asia, North America, South America and the Pacific to minister to Latter-day Saints and meet with government, business and religious leaders.