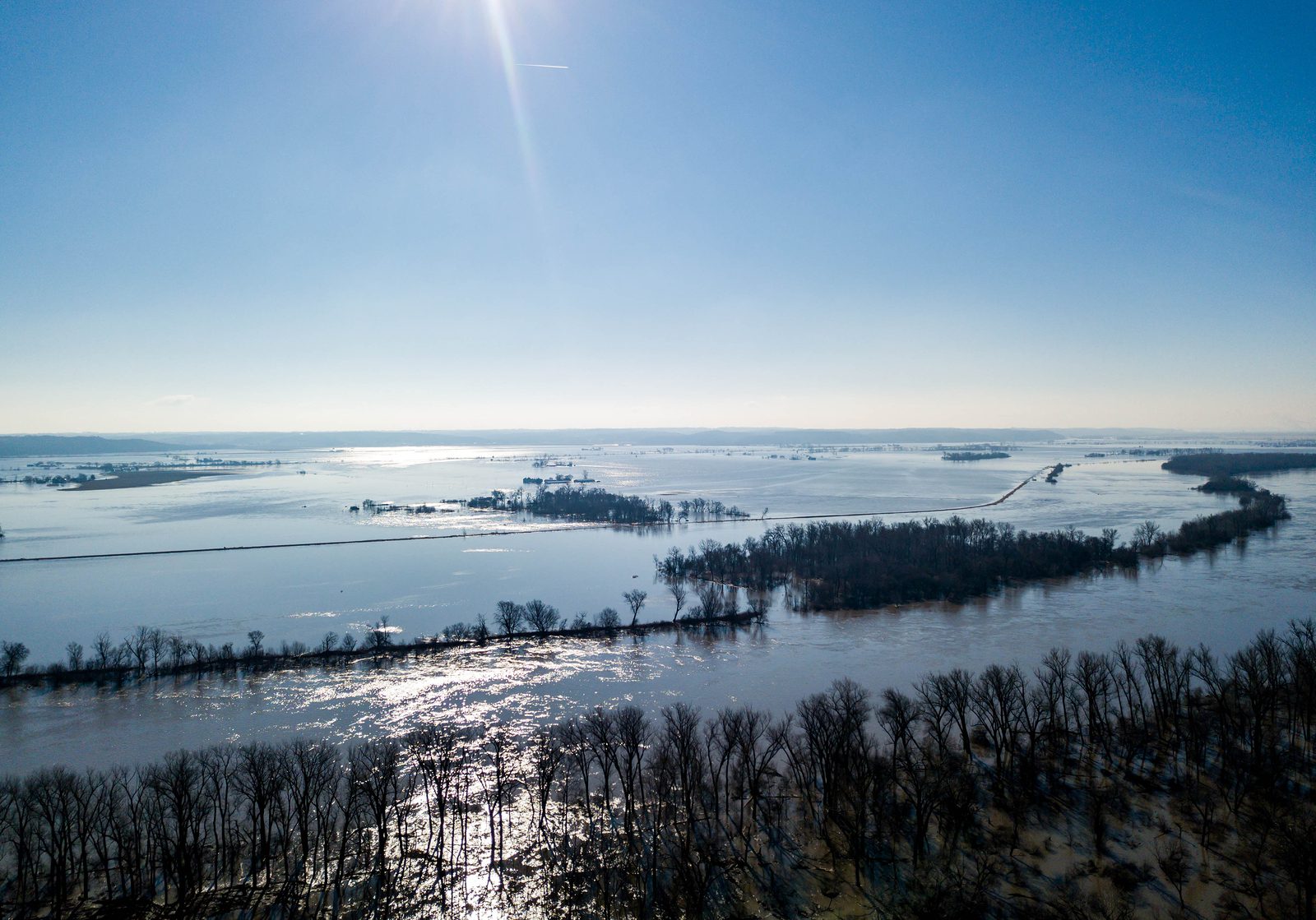 Cover image: Looking over the valley along the Missouri river in Nebraska during the March flood of 2019.

Now may be a good time to focus on food storage. Flooding is almost guaranteed in California with huge snow pack this year and rising temperatures. According to NOAA U.S. nearly two-thirds of the Lower 48 states face an elevated risk for flooding through May, with the potential for major or moderate flooding in 25 states, The majority of the country is predicted to receive above average precipitation this spring, increasing flood risk even more.

Portions of the United States, especially in the upper Mississippi and Missouri River basins including Nebraska, Minnesota and Iowa have already experienced record flooding. Flooding is expected along the lower Mississippi River, especially Louisiana, Mississippi and Arkansas. This early flooding was caused by rapid snow melt combined with heavy spring rain and late season snowfall.

On February 28, 2019 the snow pack in California was 153% of normal. Much more rain and snow have fallen since February and more expected to continue thru April.

Seventy percent of the state of Nebraska is flooding and more is on the way. What does that mean for food prices? The outlook is not good. Just take a quick look.

Nebraska contributes more than you may think to our grocery store shelves.

Iowa is a powerful agricultural state, ranked number three behind California and Texas in total agricultural production. The largest:

California produces 27% of the food consumed in the United States. Of the hundreds of crops grown there are six crops grown mainly or exclusively in California are:

Twenty five percent of total U.S. agricultural items are exported globally. The top export categories include fresh and processed fruits, vegetables and meat. Canada imports 75% of vegetables, 34% of fruit and 11% of beef products exported from the United States. Mexico imports soybeans, corn, dairy, beef and poultry from the United States. The list goes on. The United States supplies much of the food in this hemisphere and Asia. For those living in these areas prices will also rise.

You may still believe this does not affect you because you can live without artichokes and corn or you have chickens of your own. Have you looked at the ingredient labels on your foods lately? Check your ketchup, cereals, sauces and syrups, even bread, everything. You will notice most list soy as an ingredient. Soy prices rise and processed food prices go up. Almonds are only grown in California in the United States. There were only a few days without rain during the almond bloom this year for bees to pollinate the crop. We have no idea what the affects will be and how badly the crop will be affected. Almonds, almond butter, almond milk, almond cookies, almond extract could all be affected. We rarely think about the ingredients in our favorite foods.

The last time we had a food crisis due to extreme weather prices went up over 20%. Think food storage and shop the sales before prices rise. One of the great benefits of food storage is eating at last year’s prices and then replacing when on sale. March is National frozen foods month so check the freezer case for sales there as well.

Plant a garden. Learn to can and freeze foods. Stop eating out and take lunch to work. Eat breakfast for dinner, much cheaper. There are many ways to save money within your budget to make food storage a priority. We know the Lord has asked us to be prepared and have a stash of food set aside which assures us He will help us find a way.  Create a plan, pray for His help you will be guided and you will succeed.

With flooding widespread this year visit Carolyn’s facebook page to request a copy of her Evacuation Form. It provides guidance for what to take if you have an hour, 30,15 or 5 minutes to evacuate. Get help with food storage and ask questions.

So sad for Nebraska! Learning how to garden is a process. Who knew that growing zucchini would ever be hard? We moved to southern Virginia and it is taken me several years to learn the tricks of growing that amazing vegetable. Here there is fungus and bugs and lack of calcium in the ground that makes it very hard. I’m finally after many years learning how to overcome enough of those to get a crop or 3 of zucchini. (Like feeding the plant weekly w Calcium/tums etc) I learned that bush beans are the way to go because pole beans will be attacked by hordes of Japanese beetles! Gardening takes time and money and lots of experimentation in your area. Start now to learn What you can grow in your area

Gardening should be on EVERYONE's mind! And not just outdoor gardening. Growing sprouts and micro-greens is easy, inexpensive, VERY healthy, and can be done right in your home. Salt Lake City is home to True Leaf Market and Mountain Valley Seed Company (same company), among the very best in the country.And for real actionable gardening information growfood.com is the best in my opinion.