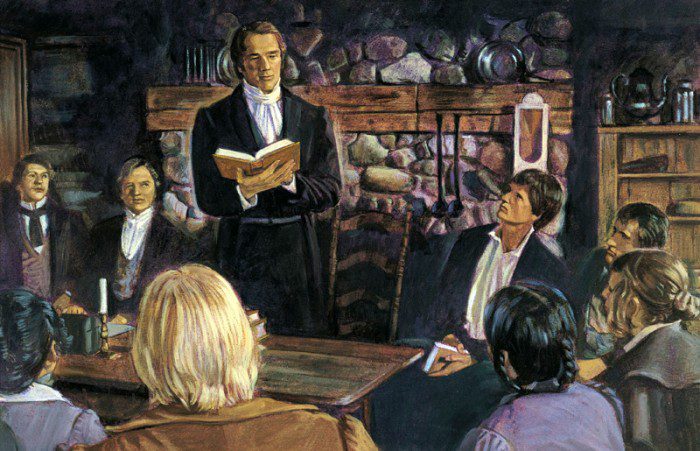 Helen Mar Kimball became the plural wife of Mormon prophet Joseph Smith a few months shy of her 15th birthday. While taking a bride so young startles us in this day and age, it was not uncommon in the early 19th century. Plural marriage was practiced in about 85% of the world, but the idea was repugnant among European and American Christians.

Plural marriage had barely begun as an institution in the Mormon Church, and only Joseph Smith and a few church leaders had begun to practice it. Helen’s father, Heber Kimball, taught her about it.

Heber C. Kimball had been ordained to The Quorum of the Twelve Apostles in 1835, five years after the organization of The Church. Because of his faithfulness, he was one of the first (after Joseph Smith) commanded to live the principle of plural marriage in 1842 in Nauvoo, Illinois.

Helen’s Parents, Heber and Vilate Kimball, were Shaken by the Principle of Plural Marriage Heber and Vilate Kimball were among the first of the Saints asked to live plural marriage.

When Joseph Smith taught Heber C. Kimball the principle and called upon him to live it, his first thought was to see if two elderly ladies would want to marry him..  They were friends to Vilate, and they were the least likely to bring jealousy into what was an ideal marriage. But Joseph wanted Heber to marry “…an English lady named Sarah Noon, nearer my mother’s age, who came over with the company of Saints in the same ship in which father and Brother Brigham returned from Europe. She had been married and was the mother of two little girls, but left her husband on account of his drunken and dissolute habits. Father was told to take her as his wife and provide for her and her children, and he did so” (Journal of Helen Mar Kimball).

Continue reading this story on LDS.net.

I've always thought that a test in mortality would be to have a lot of things thrown at you to test your faith, yet to still believe.To hold to that moment when the Holy Ghost spoke to your soul that it was true. I don't understand polygamy, especially thru the lens of current day, I assume the best in the Lord's purposes with polygamy from his ancient prophets to the latter-day prophets. I also don't know what Joseph's actual marital relationships were like. I would assume he would have had posterity thru those marriages, but I'm not aware of any.