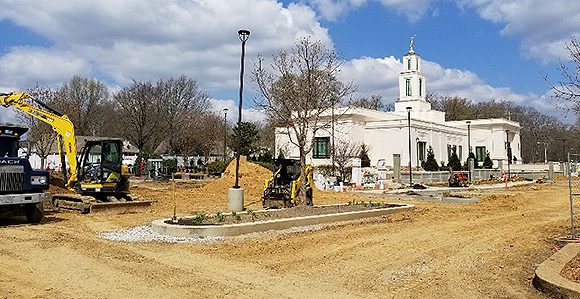 Miracle in Memphis: Behind the Temple Renovation

In Memphis and the surrounding areas of western Tennessee, the early spring months of March and April mean pretty much one thing: rain.

And this year, in early March, the saying “when it rains, it pours” was a little too literal for members of The Church of Jesus Christ of Latter-day Saints as workers scrambled to finish the renovation work on the Memphis Tennessee Temple in preparation for an open house and rededication.

With mud filling the parking lot and pouring rains disrupting work nearly every day, the temple grounds looked almost like a war zone, said Richard Floyd, a member who lives near the temple.

“On March 10, we had our first committee meeting, and this building looked as if it physically could not be completed on time,” said Elder Michael V. Beheshti, an Area Seventy and president of the temple’s open house and rededication committee for the area. “There was cement to be poured, concrete forms that were still not built, and there wasn’t a blade of grass or bush on the grounds.”

With the open house scheduled to start a mere month away on April 10, the committee contemplated postponing everything.

“But the temple engineer said that if they could just get some extra help, they would get it done,” he said. “So we called the temple district to fast.”

To read the full article on ChurchofJesusChrist.org, CLICK HERE.