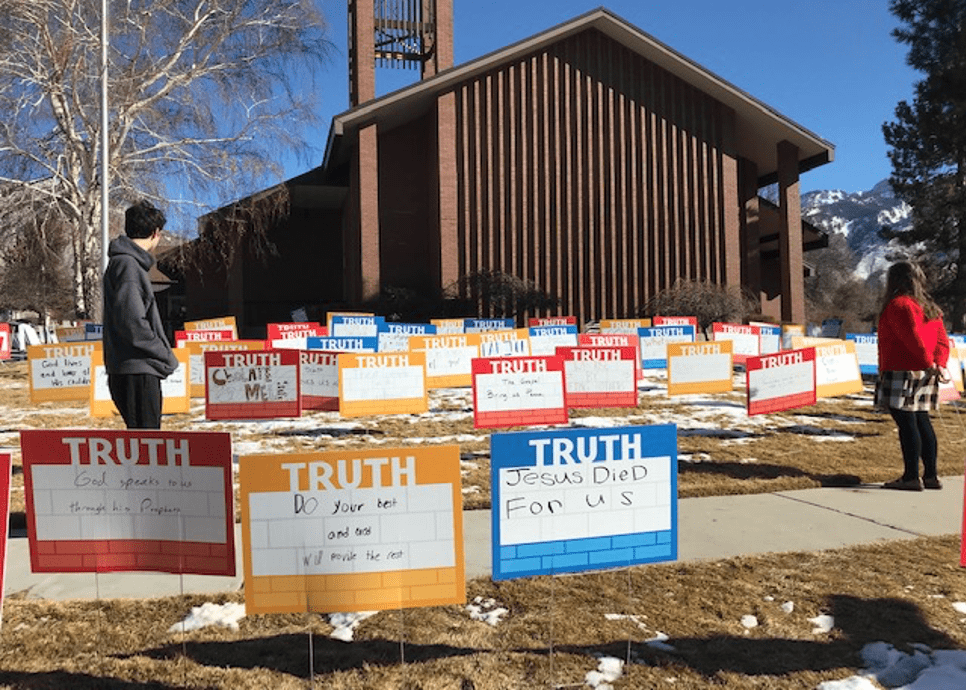 Making the Gospel Simple or Complex

Two hundred and twenty Young Women and Young Men in our stake each wrote a statement of truth on a red, yellow, or blue TRUTH placard that was placed on the lawn of the most trafficked ward building in our stake. Many passersby on foot, bike, and car stopped to walk around and read the signs. Some took photos. There were a few duplicate signs such as “I am a child of God” and “Love One Another” but not as many as you would think.

Some were only one word like: “Truth,” “Serve,” “Repent, and “Myopic.” Some were elaborate with quotes from prophets or scriptures, such as the one pictured above with six quotes! Some of my favorites were: “We rise by lifting others”; “Families are a bit of heaven on earth”; and “Teachers quorum rocks.” I think it was an inspired, simple way to involve youth, twelve to eighteen, in sharing the gospel. Simple for the youth, probably more complex for the leaders.

I have the talent to make simple things complex, especially when it comes to teaching the gospel. As a docent in the Church History Museum for twenty years, I learned I had this amazing ability. If a living, breathing museum visitor showed interest in Church history or asked a question about our beliefs, I was right there packing in as much as possible because, as you well know, this could be their one and only chance to ever have the gospel explained to them in mortality.

Let me illustrate. Let’s say I am in the Church Museum and a person asks me about the purpose of life. In my early days in the museum I would have said something like: “Thanks for asking that important question. Yes, Heavenly Father has a plan. If you have some time, I’ll tell you about His plan, including premortal life, the grand council, the war in heaven, agency, the veil, birth, death, the three degrees of glory (celestial, terrestrial, telestial), outer darkness, eternal progression, paradise, spirit prison, the morning of the first resurrection, the Second Coming, the Millennium, Satan bound then loosed, eternal marriage, and that families can be together forever. And you need to know that regrettably the name of God’s plan was lost during the Apostasy, and consequently, the word plan is not in the Bible. The loss of this name causes the world’s inhabitants to wander, wondering if God exists and what happens after death. I have answers to all these questions and can probably get through it, if you don’t interrupt with too many questions, in a couple of hours.”

I can do the same thing with my grandchildren because who knows, perhaps their parents and Church teachers haven’t stressed a certain gospel principle well enough or often enough.

Although it took me a few years, I realized that shorter and simpler accomplishes much more than overkill. My errors included not finding out what the person already knows and not asking why he or she asked the question. Then, of course, I talked too much, gave too much detail, and used unfamiliar Church vocabulary. I did all that because I thought the burden of this person’s eternal salvation depended on me. Fortunately for museum visitors, the Holy Ghost has schooled me with experiences in which I learned that teaching the gospel is His responsibility not mine. My job is to pray for opportunity and be aware as nudges from the Spirit unfold. In the examples I share, you will see how I was a bystander, observing the hand of the Lord in other’s lives.

One day a Korean man who was probably in his mid-forties, well groomed, and expensively dressed came into the museum. I welcomed him and asked him if I could explain a little about the artifact he was standing by, which happened to be a replica of the Nauvoo Temple. He nodded hesitantly. I said a couple of sentences about the temple but when I used the name of Joseph Smith, he put up his hand to stop me. He said, “I live in New York City. I am a chief financial officer for one on the largest banks in the world. I speak four languages fluently. Utah is nowhere. I have no interest in your church. I don’t know why I came.” I smiled and said, “Perhaps you will find something of interest while you are here” and moved on to talk to someone else.

About twenty minutes later I walked by where I had left him, and he was still there looking at artifacts about Joseph Smith. He stopped me and said, “I’m sorry. I would like to hear what you have to say.” I said, “You will forgive my curiosity, but what changed your mind?” He pointed to a sign painted by Lucy Mack Smith, Joseph Smith’s mother, that hung in Joseph Smith’s office and said: “This!” I was puzzled. No visitor had ever paid any attention to the sign. I looked at it, wondering how that faded, hard to read, small sign completely changed his attitude. He saw my confusion. “Look,” he said. “I thought you worshipped Joseph Smith, but this shows me that Joseph Smith knew his insignificance compared to Jesus. Joseph’s name is in simple block lettering and the name of Jesus Christ is in elegant calligraphy.”

Another time, a professional-looking Black woman asked me if I could show her a couple of highlights in the museum. She said she had been investigating the Church online and liked the idea of eternal marriage. She said she was okay with the fact that Blacks didn’t receive the priesthood until 1978 because in the Bible there was a time for Jews to receive the gospel and another time for Gentiles. “But,” she said, “I’ve been walking around the museum hoping to find mention of the three Black men who were on the first pioneer company. I’m a little disappointed that no mention is made of them.”

My mind raced. How should I respond? We happened to be standing by a wall map showing the Mormon Trail, their encampments, and other detail. I was facing her with my back to a map, and she was looking at the map. I thought to tell her that there were 143 men, three women, and two children in the Vanguard Company, that eight were Apostles, and I didn’t even know who they were, but instead I asked: “Do you know the names of the men?” “Yes,” she said, taking a list out of her purse: “Green Flake, Oscar Crosby, and Hark Lay.” I didn’t find out what I would have said next because she suddenly pointed to the map in front of her, exclaiming, “Look! Look right there! There are their names!” I turned to see and sure enough, a page from Appleton Harmon’s journal was on the wall with the men’s names.

Another day an older man, who looked like a professor, came into the museum. I watched him for a few minutes and then approached him and asked if he had two minutes to hear an interesting detail connected to the artifact he was looking at. He declined. I smiled and started to walk away. Then he said, “I do have one question. Why would Joseph Smith bring his followers to live in this desert?” I said, “Do you want the short or long answer?” He said, “Short.” I said, “Joseph Smith was dead. Brigham Young was the one who brought the people here to the Valley of the Great Salt Lake.” “Oh,” he said, “then I want the long answer.” So I explained in three sentences how Joseph Smith prophesied that members of the Church would become a mighty people in the Rocky Mountains, that Joseph was killed by a mob in 1844, and that three years later the westward trek began under Brigham Young’s leadership.

Two questions asked and answered simply, led to over an hour of other questions. He asked about our beliefs in the Godhead, a premortal existence, the purpose of life, and what happens at death. Finally, he said: “I’ve got to go; I’m meeting a friend for dinner. Thank you for spending this time with me, and now I know the difference between us.” I had no idea to what he was referring. He said, “I have a doctor of divinity degree. I have been a pastor of a large Protestant church for forty years. I have prepared a sermon almost every week. I have written four books. The difference between us is that you know what you believe and I don’t.”

Hundreds of these experiences have taught me that my opportunity is to be physically present and spiritually prepared to simply share my knowledge of the artifacts in the museum and my understanding of the gospel. The rest is up to the Holy Ghost. I never know where saying, “Welcome to the museum,” will lead. Many times I feel like Nephi: “I was led by the Spirit, not knowing beforehand the things which I should do” (1 Nephi 4:6).

One more short illustration. One afternoon a young man from India introduced himself as a graduate student at the University of Utah. He said he had come to buy a Book of Mormon because some acquaintances had been reading passages to him from their copies. I told him the museum gives free copies to visitors who ask. I got one from the closet and handed it to him. “Oh, no,” he said, “not like this. I want a beautiful, leather copy like my friends have.”

No doubt, in every venue on Temple Square, at every Church history site, and at every temple visitors center, similar experiences happen daily. It is the Holy Ghost who brings visitors to dedicated places where dedicated fulltime and service missionaries wait. These opportunities also happen in casual conversations at home, at work, at school, and when Young Women and Young Men write core beliefs on signs for passersby to see and maybe even to feel the Spirit.

I have learned through experience many times, and especially as a seminary teacher, that less is more when teaching the gospel. Keep it simple. The gospel is not complicated. When you focus on too many principles, the core truths of the gospel can be watered down. People also have their attention scattered and cannot retain what you teach. Always, always, make Christ the center of your teaching. If you are not teaching Jesus Christ in every lesson, you are not teaching the gospel.

Thank you, thank you....for some power and yet simple examples of how to speak to someone's heart and soul rather than to what we assume is their need.