Lesson 33: “Ye Are the Temple of God" | Meridian Magazine 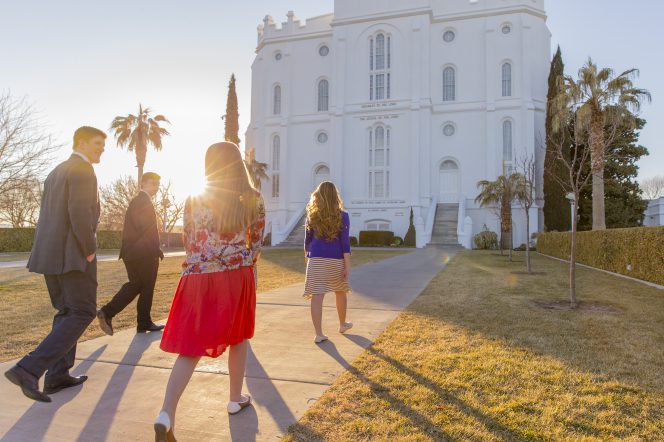 Imagine ancient Corinth stretching under Greek skies, nestled above blue seas. “When Corinth was alive, it flexed powerful muscles. Strabo said that it was ‘always great and wealthy.’ Rome made southern Greece into the province of Achaia and made Corinth its capital…Trade passed to and from the southern section of Greece through a Corinthian funnel, and cargoes to and from Italy were regularly routed through Corinth in days when ships navigated near the shores rather than risked the open sea. Thus, Paul was at a communications center while at Corinth and was accessible to Corinth in his Asia Minor stay afterward.” wrote Richard Lloyd Anderson

“The city was a few miles from the narrow passage where Mediterranean waters nearly turned south into an island…In Paul’s day cargoes and small ships were pulled across this isthmus. This symbolizes Corinth’s prosperity, which Strabo said came because “it is situated on the isthmus and is master of two harbors, the one leading straight to Asia and the other to Italy.”(1)

Like any modern trade center and big city, Corinth was sophisticated and worldly, a bustling center of wickedness and good. The Lord had commanded Paul in vision to stay and gather his people out through missionary work, and the Church became significant there. Yet, as Anderson noted, “The Saints at Corinth had believed, prospered, and divided, with parties opposing Paul and many doctrines he had taught. Because Paul had to correct so much, he wrote more to Corinth than to any other branch on record. The two Corinthian letters contain more than a fourth of the content of all fourteen of Paul’s letters. They include much interaction–answers to letters, references to the faithfulness and unfaithfulness of the Saints, even quotations from skeptics and critics in connection with Paul’s replies.”(2)

In this lesson, comprising the first six chapters of Corinthians, we see Paul’s concern about three major problems assailing the Corinthian Saints, temptations that eat like acid to Saints of any time who live in worldly environments. These are contention, the lure of worldly wisdom, and sexual immorality.

Apparently, disunity had crept into the Corinthian church. Paul laments “Every one of you saith, I am of Paul; and I of Apollos’ and I of Cephas; and I of Christ.” One of the truest signs that a people belong to the Lord is that they are united in harmony. The people of Zion are of “one heart.” At the end of his life, in one of his most moving recorded prayers, Christ pled to his father that those that believed on him “all may be one; as thou, Father, art in me, and I in thee, that they also may be one in us: that the world may believe that thou hast sent me” (John 17: 20,21).

Oneness is at the very heart of the atonement, which literally means at-one-ment. Its transcendent purpose is to provide a means whereby mortals, utterly divided from their Father by sin and mortality, can become one with him again. Through the atonement they are reconciled to their previous relationship, at home with their Father. The atonement is also the only means whereby people, divided by their selfish interests, can become united in a glorious relationship of harmony.

If oneness is God’s goal for us, then, we can be certain that its very opposite is division, the grabbing territory and self-protection, the dissension that is so often part of life in mortality. When Lucifer is on the loose, he scatters people and disintegrates relationships.

C.S. Lewis uses a clever image to illustrate this in his novel, The Great Divorce. This “divorce” he describes is the gaping gulf between heaven and hell. The main character in the opening scenes is supposedly in hell, which he describes as a series of empty, dark streets stretching as far as the eye can see. Only an occasional light from a distant house punctuates the scene, but none of them are clustered together into a neighborhood. Why? Nobody in hell enjoyed living near each other. They built houses, all right, but soon would contend, and build a house far away from others. The result? Abandoned streets and hollow buildings where human society could not exist, because people could not bear each other.

What a far cry the kingdom of God is from this image. We hear Paul’s plea to the Corinthians “that ye all speak the same thing, and that there be no divisions among you; but that ye be perfectly joined together in the same mind and in the same judgment” (1 Cor. 1:10). Only one path is offered to oneness. People can be one only as they have their eye singled to the same source–God. This profound oneness is an attribute of the three members of the Godhead. The call is for disciples to follow the same pattern.

Learning by the Spirit

The Greeks delighted in worldly learning, philosophical dialogue, persuasion and rhetoric. It is little wonder, then, that the Corinthian Saints were enticed by man’s wisdom. This is why Paul taught them so strongly that, “For what man knoweth the things of a man, save the spirit of man which is in him? Even so the things of God knoweth no man, but the Spirit of God” (1 Cor 2:11). Clearly the most expansive and transcendent learning is only available through the Spirit of God. Spiritual learning comes by the Spirit. A natural man may be taught the things of God, but they are only foolishness to him. It is the Spirit which lends understanding.

President Joseph Fielding Smith taught: “The Spirit of God speaking to the spirit of man has power to impart truth with greater effect and understanding than the truth can be imparted by personal contact even with heavenly beings. Through the Holy Ghost the truth is woven into the very fibre and sinews of the body so that it cannot be forgotten.”

Elder Dallin H. Oaks wrote in the March 1997 Ensign, “The principal revelation on teaching by the Spirit is section 50 of the Doctrine and Covenants. There the Lord tells the elders of the Church that they were ordained ‘to preach my gospel by the Spirit, even the Comforter which was sent forth to teach the truth’ (v. 14).

“Section 50 explains that if we teach by the Spirit, then the person we teach can receive the word by the Spirit, and both the teacher and the learner ‘are edified and rejoice together’ (see vv.21-11).

“In contrast, the revelation explains, if we teach by ‘some other way it is not of God’ (v.20).

“Elder Bruce R. McConkie of the Quorum of the Twelve Apostles taught that principle in these words: ‘If you teach the word of truth–now note, you’re saying what is true, every thing you say is accurate and right–by some other way than the Spirit, it is not of God. Now what is the other way to teach than by the Spirit? Well, obviously, it is by the power of the intellect.

‘Suppose I came here tonight and delivered a message on teaching, and I did it by the power of the intellect without any of the Spirit of God attending. Suppose that every word that I said was true, no error whatever, but it was an intellectual presentation. This revelation says: “If it be some other way, it is not of God’ (D&C 50:18).

This is a fantastic lesson, and a reminder for me to teach my children more with the spirit, bear my testimony more often to them, using the spirit as my guide.