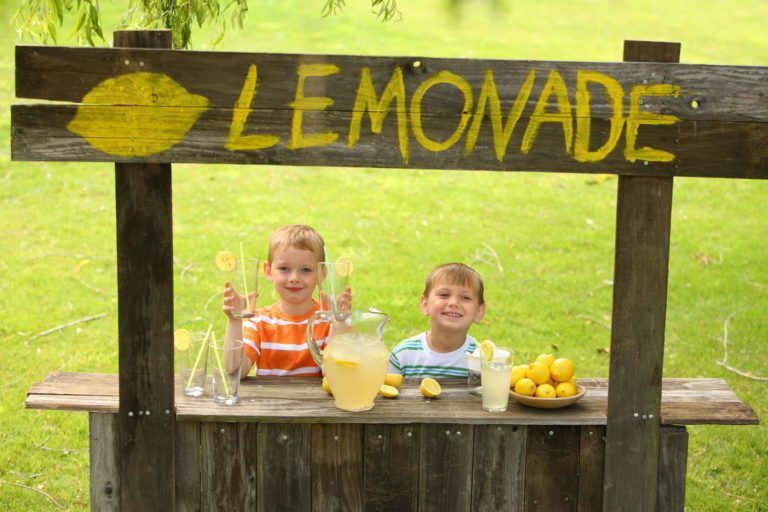 One thing I love to do in the summer when I have time is to stop at children’s lemonade stands. I do like lemonade, but I think the biggest reason is that I have a fondness for children who have an entrepreneurial spirit, and I want them to succeed. That is why I stopped at one on my way home from work.

There were three children there. The oldest girl was about ten, the next oldest girl was about eight, and the boy was probably six. When I stopped, the children became excited. I don’t know how many customers they had had that day, but for a country road, it had a fair amount of traffic, though it was definitely no city thoroughfare.

The younger girl came running to me as I climbed out of my van. “Would you like a cup of lemonade?”

I nodded. “In fact, I would like four of them, one for each person living at my home.”

At the mention of four cups of lemonade, their excitement grew. She ran back to their little fold-up table to help with the order. As I approached the table, I could see that their sign not only said they had lemonade for fifty cents, but they had chocolate chip cookies for the same price.

The oldest girl finished filling the last cup of lemonade and looked up. “Would you like a cookie, too? They’re only fifty cents.”

The second oldest girl flipped her pigtails back from her face and said, “Or, if you want an even better deal, you can get four for two dollars.”

“It is, too, a better deal,” the younger girl retorted. “The person gets more cookies, and we get more money.”

I couldn’t argue with that.

The oldest girl shook her head. “Our mother did. She doesn’t trust us selling anything we make except the lemonade.”

The girl reached under the table and pulled out a plastic tray. When she opened it, there were only crumbs. She gasped and turned to the little boy, who stood by silently with cookie crumbs and chocolate all over his face.

“Ricky,” the girl said accusingly, “you ate all of the cookies.”

“Well, you ate all the rest,” the girl said.

The oldest girl chimed in. “Ricky, how can we make any money if you eat everything we’re trying to sell?”

“But it’s almost dinner time,” Ricky replied, “and I was hungry.”

The mother must have heard the commotion, because she appeared, carrying a baby.

“What’s the matter?” she asked.

“Mom, Ricky ate all of the cookies,” the younger girl replied.

“Well, all but one that we sold,” the oldest girl said.

The mother smiled and turned to me. “If you can hang around a minute, I have a nice, hot batch in the oven.”

I nodded. “For hot cookies, I can hang around.”

She smiled again and went back into the house. I visited with the children, and the two girls extolled the virtues of their mother’s cookies.

He smiled an embarrassed smile and nodded.

Soon the mother reappeared with a nice, warm bunch of cookies as promised. I told the children I would take four. I planned to wrap them in a napkin and be on my way.

“But don’t you want to try one first?” the oldest girl said. “A sample is free.”

I nodded. “I would like that.” I ate a cookie, and the chocolate just melted in my mouth. When I finished it, I said, “I’ll take a dozen.”

“We sell a lot more when we give samples,” the oldest girl said.

I laughed. “I can imagine.”

As I paid for the cookies and lemonade, I turned to the mother. “I think you need to go into the cookie business with your children as your sales team.”

She laughed. “They’re good, aren’t they?”

And as I headed on my way, I made a note to stop at that lemonade stand again.

Really enjoy your stories, this one was a delight and brightened my day. I had a boy like that.

I love this story. It shows all that makes story telling in America so unique in the world.