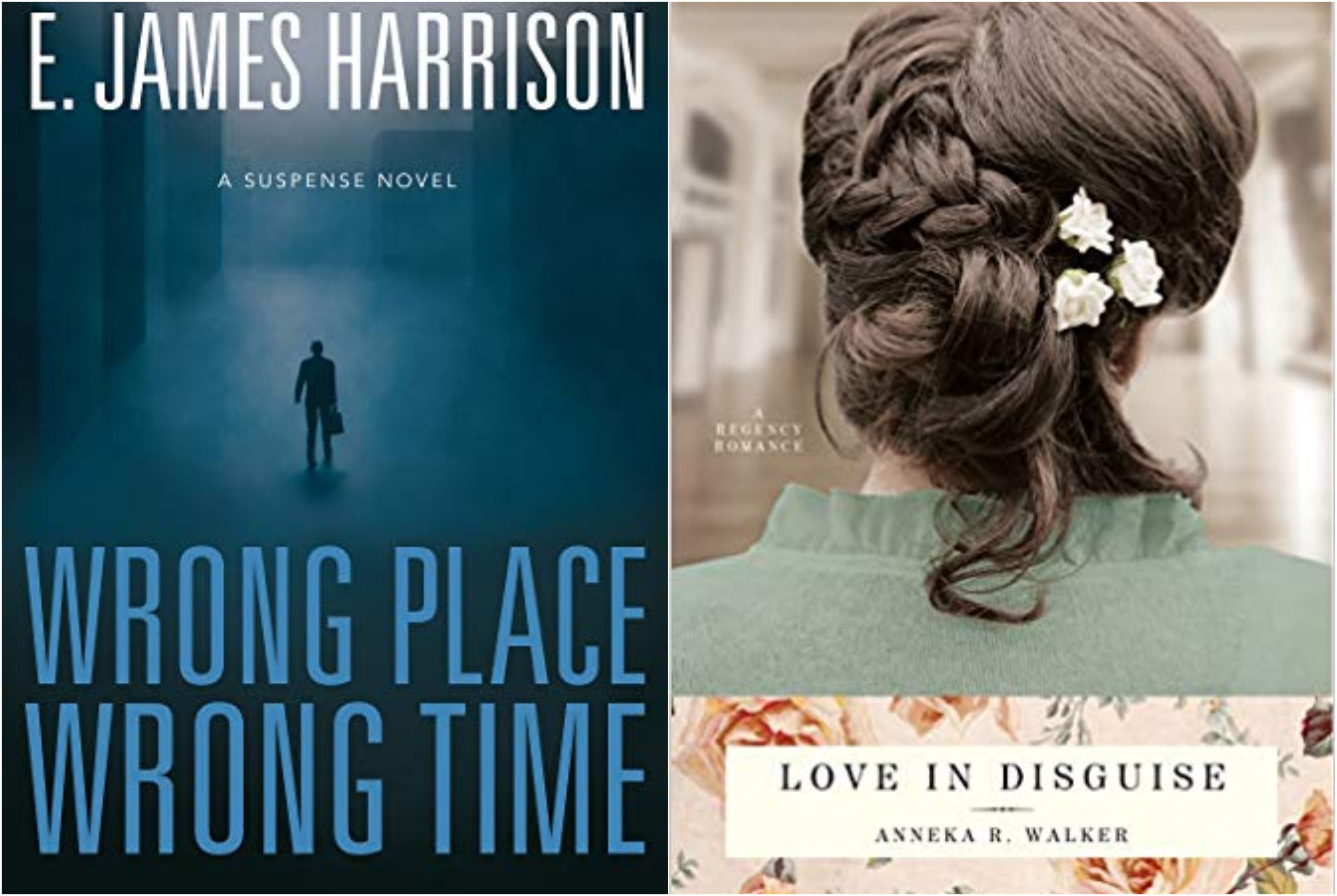 Two new novels from different times and places will appeal to different readers. Wrong Place Wrong Time by E. James Harrison is a suspenseful mystery while Love in Disguise by Anneka R. Walker is a classic Regency.

Starting with a missile attack on a Coast Guard helicopter Wrong Place Wrong Time by E. James Harrison is a suspense novel fans of the genre will love. The story skips from the crash scene to a doctor’s office where Marena Walker is receiving follow up treatment after a radical mastectomy. Soon after, she and her husband Greg, both in their late fifties or early sixties, embark on a Caribbean vacation which they are thoroughly enjoying until they witness a murder and must run for their lives. Never knowing who they can trust, they must make their way secretly from their vacation paradise to their home in America.

Vaughn specializes in deliveries. He transports drugs, money, body parts, anything someone is willing to pay a premium price to transport from anywhere in the world to the United States.  He’s wanted by almost every federal and local law enforcement group in the US. Federal agents track Vaughn from sunny Florida to a blizzard in Idaho.

Kelli, a young woman, who works for the Idaho National Laboratory, a nuclear facility near Arco, Idaho, becomes involved when she allows a foreign agent to pay her gambling debts. All of the characters finally merge in the small, storm swept Idaho town, but will the foreign agent succeed with a plan that involves the nuclear facility? Will the federal agents and local police pool their information to stop a catastrophic disaster? Of all of the people briefly touched by Vaughn’s mysterious cargo, who will survive the encounter?

Some of the scene changes in this story are a bit awkward and the many points of view switches are somewhat confusing. There is no main character to follow all of the way through the story, though the Walkers come closer than the others. The characters are realistic in most respects and each of the “good” guys easily becomes a person the reader identifies with and cheers for. The settings are strong and accurate from the sandy island beaches and clear Caribbean waters to the deep snow and howling winds of central Idaho. I was particularly impressed with Harrison’s description and background info for the Idaho National Laboratory, INL. In spite of the many unconventional aspects of this novel’s style the plot moves forward well and builds to a strong conclusion.

Wrong Place Wrong Time is E. James Harrison’s fourth published novel and is quite different from his other novels which have more religious themes. He was born in Salt Lake City and has degrees in public relations and creative writing. Much of his professional life has involved writing ads and commercials. He is married and the father of two daughters and grandfather to four grandkids.

Regency fans will welcome another author of the genre with its glamorous ball gowns and hair styles. Love in Disguise also includes a small amount of historical background on the efforts of protesters to eliminate the slave trade.

Marion Watt is embarrassed when Lord William Everton walks out in the middle of her piano solo during her first season leading her to make several errors, so he is the last gentleman she considers when she begins a serious search for a husband during her second season. If her mother weren’t seriously ill, Marion wouldn’t be in a hurry to find a suitable husband. She would prefer to marry for love. Since it is her mother’s greatest wish to see her daughter settled in a good marriage, Marion makes it a priority. Unfortunately the one man she can’t seem to avoid is William.

Lord William Everton is the darling of the ton. Young ladies from all of the top families vie to gain his attention without much success. He’s more interested in stopping the slave trade than acquiring a wife. Finally his parents make a bargain with him in which his mother and aunt interview ten candidates comprised of eligible misses from the most respectable families,  searching for a suitable prospective wife for him. After each young lady’s visit with the women, William approaches the girl dressed as a beggar to ascertain each one’s character. He will woo the top candidate. When that young lady turns out to be Marion Watt, he  has a problem since she is the one debutant who has no use for him.

Walker has an engaging style and includes enough twists and turns to give the story a fresh feeling. The characters are well developed and realistic for the time. The historical background and the setting for the period are accurate and well researched. The story follows the general outline for a romance novel with girl meets boy; an obstacle arises to keep them apart; the obstacle is neutralized or removed; they live happily ever after, but it doesn’t have the formula feel so many Regency novels have.

Anneka Walker has a bachelor’s degree in English and History. She lives in Nampa, Idaho, with her husband and children.

LOVE IN DISGUISE by Anneka R. Walker, Published by Covenant Communications, 244 pages, softcover $15.99, Also available on CD and for eReaders.