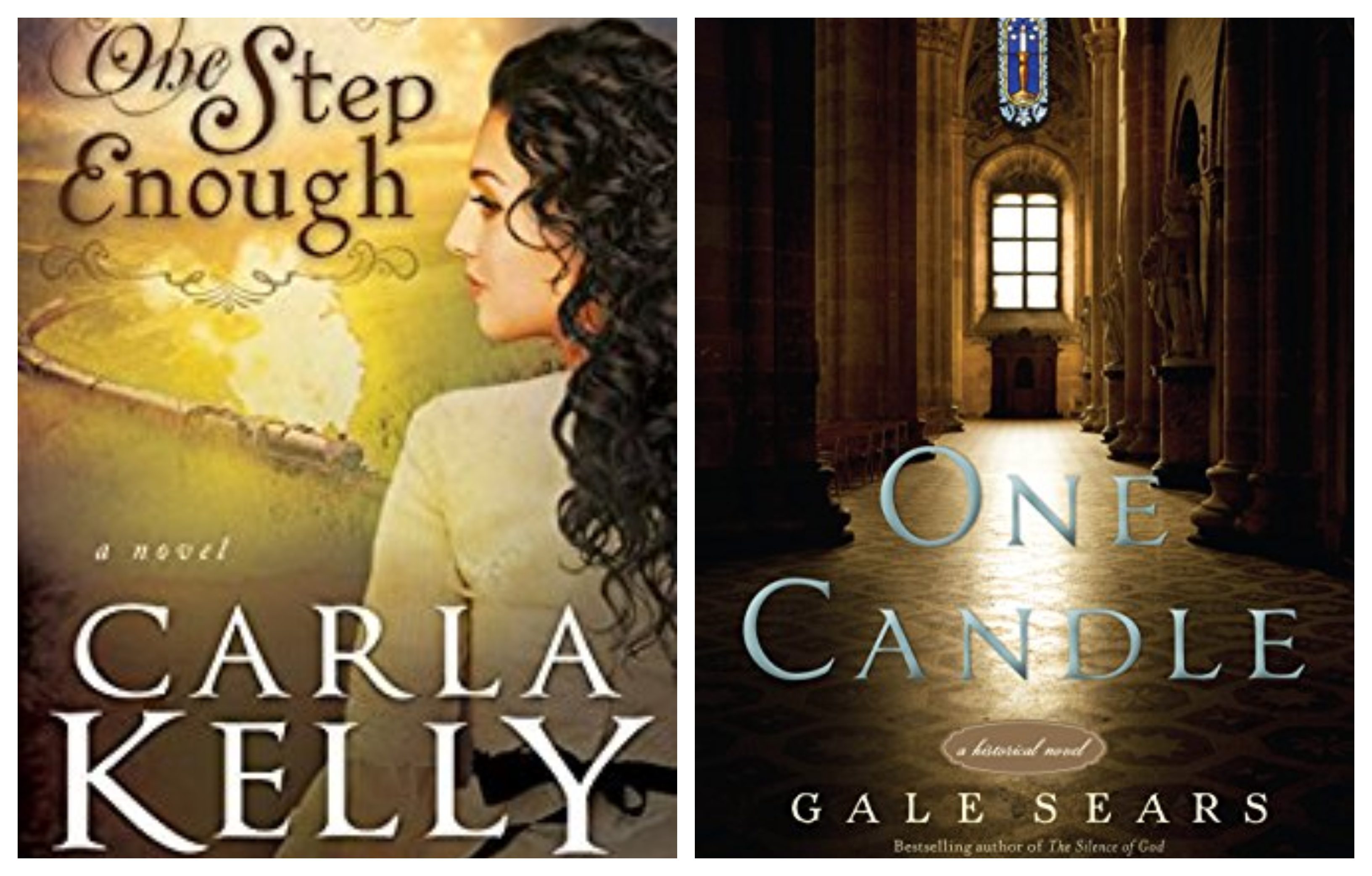 LDS Fiction: A Look Back

Historical fiction gives us a chance to look back to a prior time and view events and people in closer detail than we find in other accounts. It gives the reader an opportunity to feel emotionally connected to the time, events, and people of that era. Oddly enough both novels I chose to review today begin with the same word–One Step Enough by Carla Kelly and One Candle by Gale Sears. Both authors are highly acclaimed historical writers who devote a great deal of time and attention to research and accuracy. Kelly takes us to Utah and the early 1900s while Sears introduces us to the Piedmont area in Italy a half century earlier. Both are compelling, well-written stories that are both informative and exciting.

ONE STEP ENOUGH by Carla Kelly

One Step Enough by Carla Kelly begins with a real disaster that occurred in Utah a little over a hundred years ago when the Scofield mine exploded killing two hundred miners and leaving a town filled with widows and orphans who soon dispersed across the country. Della Anders and Owen Davis are engaged to be married and plans have been made to travel to Manti for the temple ceremony in a week, but the disaster changes everyone’s plans. The bishop performs a hasty marriage so they can be together to help with the cleanup and to assist those who need help.

Owen, a widower with a seven-year-old daughter, just resigned from his job at the mine the day before the disaster because Della had vowed not to marry a miner. Her father was killed in a mine collapse when she was twelve and she still suffers nightmares about his loss and about the misery she suffered at the hands of the unkind relatives she was sent to live with. Her aunt and uncle refused to allow her to grieve for her father, a man they claimed was the blacksheep of the family, nor know anything about her mother who left her and her father when she was an infant Owen is grateful to be alive to raise his daughter and marry Della, but he also suffers greatly from survivor’s guilt. He spends as much time as possible building and carving a beautiful casket for his best friend who was one of the victims.

Owen promised Della he would not return to mining, but he has to earn a living and the company that owns many of the Utah mines offers him a good wage to evaluate their mines for safety and design a better network of supports to improve their safety. Technically he wouldn’t be a miner, but he would still have to spend time in the mine measuring and fitting the new supports. He knows he can’t undo the past, but he hopes that by creating safer shafts and tunnels he can assuage the guilt he feels for not being with his friends that awful day they lost their lives. At first he sends Della and his daughter, Angharad, to Provo, but being apart is too hard on all three of them and soon they join him in the mining camp where he is working. Needing to find work, Della finds employment in the assayer’s office.

Many of the characters in this story were real people. Della and Owen are fictional, but feel very real. Carla Kelly is one of the better historical writers who manages to make both the real people and the ones she invents feel like people the reader has known and cared about for years. This story reaches deep to tell a story of two people romantically in love whose love grows and expands to greater heights as they face tragedy, fear, and hardships. It’s also a tale of suspense, faith, and the deep, unforgettable love between a parent and child which is also possible between a stepparent and child. Kelly also provides a strong, believable picture of the terrain, transportation, tools, clothing, schools, etc., of that turn-of-the-century period. She paints a picture of mining and all that surrounds it in vivid detail. History buffs will adore this book as will anyone who just likes a good, well-written story. It is a sequel to My Loving Vigil Keeping, but works very well as a stand alone novel.

Carla Kelly writes for both the general market and for the LDS market. To date she has published more than forty novels and is the recipient of numerous awards for her work. She grew up a “Navy Brat”, worked for the National Park Service, and currently lives in Idaho Falls, Idaho.

ONE CANDLE by Gale Sears

Using the symbolism of a candle to dispel darkness, Gale Sears tells the story of how the Gospel was first introduced to the Waldenese people in Italy in 1852. This small group of people had been severely persecuted for their beliefs. They were beaten, raped, murdered and their property confiscated for centuries until they isolated themselves in high mountain villages of the Italian Alps. Followers of Peter Waldo believed Catholicism had strayed from the principles of the primitive church. In their attempt to reinstate the church as established by Christ and His apostles, they incurred the wrath of the government/church of Italy which refused any rights to those who didn’t follow the sanctioned religion. Just two years after Brigham Young and the first contingent of Saints reached the Salt Lake Valley, he called newly appointed apostle, Lorenzo Snow, to open a mission in Italy. Inspiration led him and two other missionaries to seek out the Waldenese, a people who shared a history similar to their own.

Leaving the valley so soon after the arduous journey to reach it was difficult for Elder Snow. As was leaving his wives, children, and sister, Eliza, but he was firmly committed to spreading the Gospel. He developed a deep love for the people and the area, especially an old crusty Catholic priest, Father Andrew, the Guy family, the Cardon family, and so many others. Learning a new language, a mixture of French and Italian, was a challenge. Miracles that further strengthened his faith and blessed the people convinced him the Waldenese were a people prepared by God to receive the Gospel.

Father Andrew the old priest, dearly loves his nephew’s two children, Albertina and Joseph. He is well-educated and has a deep love of ancient writings and scholarly works. He believes the ancient writings that attest to the atrocities committed against the Waldenese should be preserved and is curious about the books and pamphlets of the Mormon missionaries. Unlike most members of his faith, he is not opposed to the friendship of his beloved great niece with the Waldenese girl, Madeleine. The healing of his great nephew, Joseph, by the missionaries stirs thoughts and feelings he struggles to understand.

Madeleine had a dream when she was six of three strangers arriving on the mountain to give her a book. The dream deeply impressed her and her family. When she meets the missionaries almost a decade later just as in the dream, she knows at once that they have an important message for her family. Their conversion to the Gospel comes easily.

Albertina gains a testimony listening to the missionaries, but joining The Church of Jesus Christ of Latter-day Saints is problematic for her. Her beloved uncle is a Catholic priest, her family is committed to the state religion, and she and her family have witnessed the persecution heaped on dissenters by both the government and mobbers.

The story starts slowly with the introduction of the old priest, but gains a faster tempo as the story progresses. The characters are based on real people and feel real to the reader. The use of Italian words and names is a little confusing, but not overdone and is essential to the story. Most readers of historical accounts of early LDS missions, whether fictional or real, dwell more on England or Scandinavia than on places such as Italy, making this lightly fictionalized story not only informative, but a refreshing delight.

Gale Sears grew up in Lake Tahoe, California, and spent her high school years in Hawaii. She received a BA from Brigham Young University and a Masters from the University of Minnesota. She and her husband now live in Utah. They are the parents of two children. She is a meticulous researcher and has won awards for her compelling historical novels.