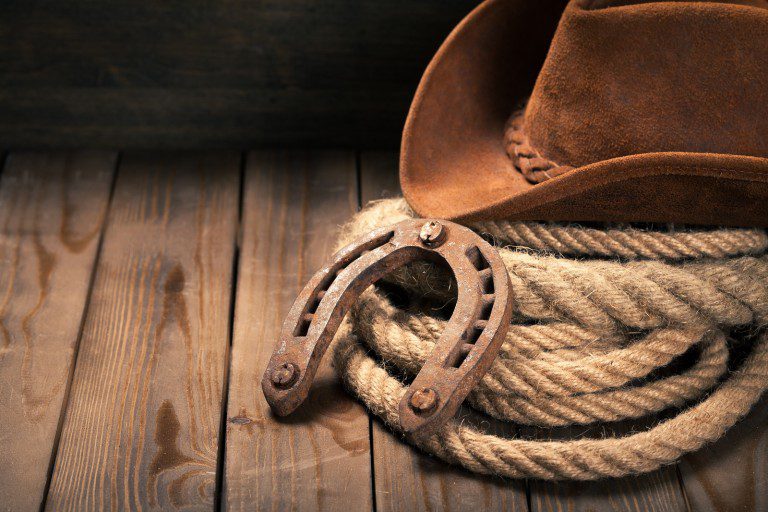 Western fiction is a genre that has drawn little attention for years, but has begun to re-emerge over the past year complete with the usual sub genres. The few Westerns such as Sarah Eden’s Hope Springs and Savage Wells series that have drawn wide attention in recent years were more often classified as Historical, Pioneer fiction, or even Romances. A few writers such as Clair Poulson, myself, and a few others draw on Western elements in our contemporary novels, but Kate Palmer has gone a step further in creating Contemporary Westerns with all of the horses, cowboys, outlaws, cattle, vast tracts of land, and small town sheriffs of the Old West updated to the present time.

Western Hearts is actually four novels packaged together as one for eReaders under the title Western Hearts Series. The individual books are too long to be considered novellas and each one includes its own cover and publication data though they are bundled together in this series. Each book has one character, though not necessarily the main character, who is part of the Hunsaker family. The books consist of Snowed Inn, Storm, Olivia, and Alexus. (They can be purchased as individual paperback books at some locations.)

Jayne Gardner is a female rancher who has turned her family’s ranch into a successful lodge and restaurant. One of the features of the lodge is a horse drawn sleigh ride. When she learns the community youth group is facing a deadline to procure money for building a swimming pool, she increases the number of sleigh rides and  pledges the proceeds to the project. Her volunteer sleigh driver for the additional ride turns out to be her former boyfriend, Forest Hunsaker, who left her three years earlier. When a major theft and vandalism occur Jayne and Forest team up to rescue the project.

Neither Jayne nor Forest are particularly memorable characters other than both are over six feet tall. In spite of Jayne’s skill level in running a successful business, she is insecure. A silly misunderstanding over his reason for leaving is the basis for the tension between them. I had a difficult time getting into this story or caring about the characters, though it improved as the story proceeded. The ending felt a little incomplete.

This story begins with the theft of eleven head of cattle which Storm desperately needs in order to have any chance of paying off loans she has taken out. Oddly most of her neighbors have also had eleven head of cattle stolen over the previous months, the exact number it takes to fill a gooseneck stock trailer. But how did the thieves get the cattle out without being seen? Financial pressure weighs heavily on her. Her parents never settled down, but constantly moved from one city to another until her mother died. The ranch became her first permanent home when her father left her with her maternal grandfather after her mother died. When her hired hand, a teenage boy is killed in a car accident, which might not have been an accident, two neighbors show up to help her. The first is a former boyfriend and the second, a widower with two children. The cattle thieves pose a greater threat than merely stealing stock. Lives and reputations are at stake. Who can she trust with her life or her heart?

Storm is a difficult character to like at first, though the overall story is appealing and Storm grows on the reader.

Olivia features an exceptional horse trainer who agrees to care for her father’s ranch while he serves a six month medical mission in South America. Olivia Nielson is engaged to Shane Chapman and the two are in the process of building an exceptional stable and training facility called Sterling Shoes Stables. Her fiance isn’t happy with the arrangement and she doesn’t understand why her father needed her at the ranch in his absence since he has a partner, Adam Hunsaker. Though he is a busy veterinarian, it seems more logical for him to take charge.

When Shane sends several horses to the ranch to be stabled and she discovers he’s keeping secrets from her, some of Shane’s backers have pulled out, Adam disappears at times, and she becomes aware two men are following her, she doesn’t know who she can trust.

This is probably the best written of the four stories. The characters are appealing and there is greater mystery and action involved. The conclusion is a little short on details.

Alexis Hunsaker is a therapist who works with handicapped children in a riding program to help them become stronger and gain greater self-esteem and body control. A neighbor who is serving a medical mission asks her to meet the flight of a young woman he has been working with in South America who is going to be studying for her nursing license in America. She is surprised to find two people waiting for her at the airport. The other one is an extremely good looking doctor, Gabriel Torres, who is completing his residency in her small town. He will be living at a nearby Inn where he will also work part time as a cook. He plans to move to a city to work when the three months is over and wants to avoid an emotional entanglement. Alexis, too, is uninterested in a short term romance. A piece of ancient pottery sparks a mystery neither can avoid. As they attempt to help each other, untangle the mystery, and avoid danger, can they also avoid being drawn to each other? The characters in Alexis are more realistic and likable than in some of the other stories. The ending isn’t as complete, however, as most readers would like.

There are a number of flaws in these books, some of which fall into the word usage, grammar, etc. category; things a copy editor could quickly fix. Some involve small matters such as farming details. Some are the lack of attention devices to start each book and the rushed endings, areas a good editor should have caught. Still the stories have more to recommend them than detractions. They are a refreshing look at the rigors and different facets of modern ranching. Even the main characters I didn’t particularly care for are strong, committed, get-it-done people. Though romance is a major component of all four stories and romance played a minor role in the old Westerns, the horses, the crooks, and the Western aura holds its own with the likes of Zane Gray and Louis L’Amour.

Kate Palmer has written in several different genres, though most of her books have a Western slant. She is married and the mother of six children.

WESTERN HEARTS  SERIES, BOOKS 1-4 by Kate Palmer, sold by Amazon Digital Service LLC, 578 pages, Available for eReaders $ .99. These books can be purchased as individual paperbacks for $7.99 each.