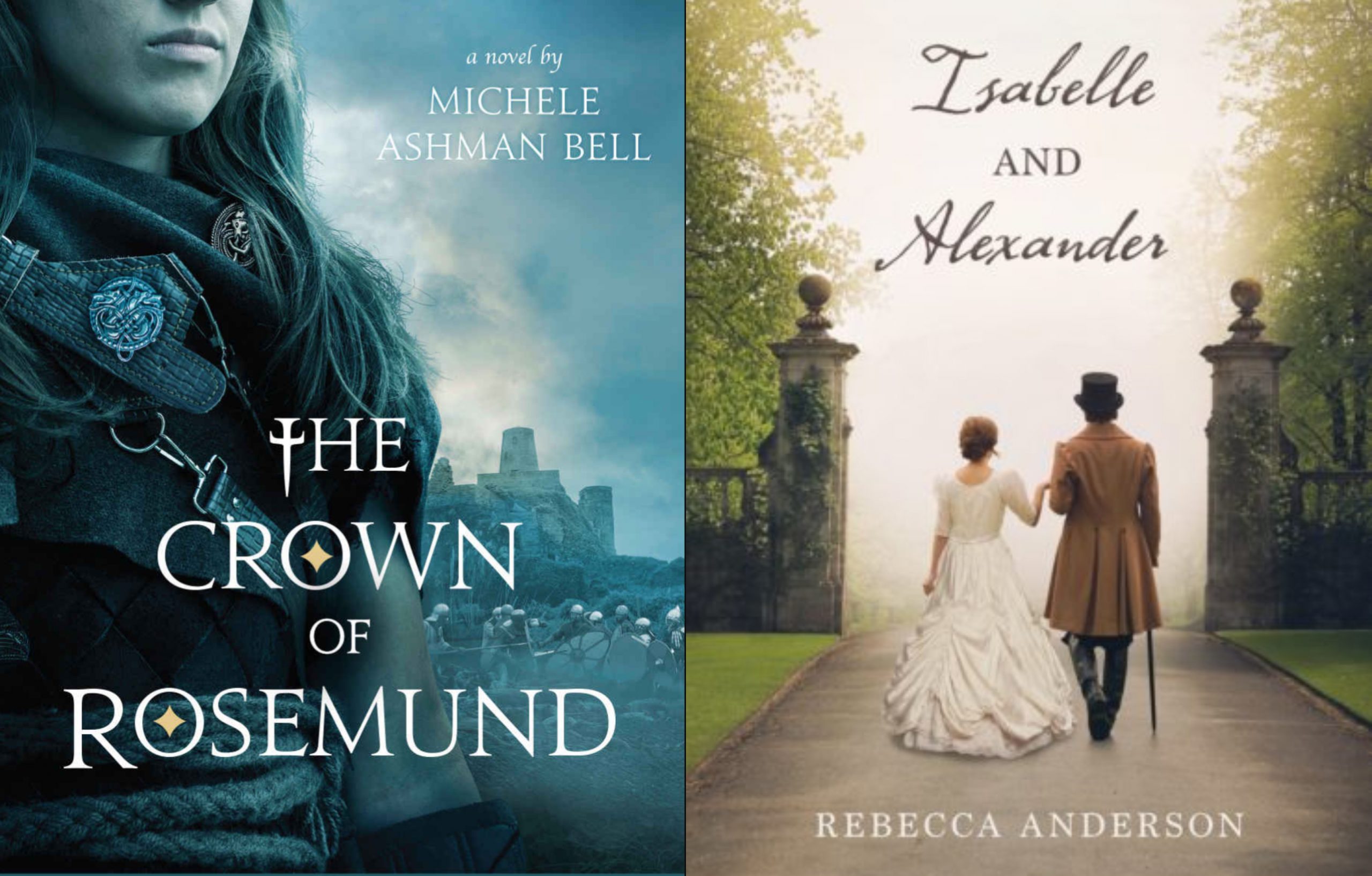 The Crown of Rosemund by Michele Ashman Bell takes us back to 1498 and a young heroine who faces tragedy and must pretend to be a boy in order to reclaim her father’s throne. Isabelle and Alexander by Rebecca Anderson takes a young couple in 1850 who marry as strangers, then circumstances force them into unexpected roles. Both stories are well-written and thought provoking. Even those who don’t ordinarily enjoy Period Romances such as Regencies may be surprised by how enjoyable these two tales are.

THE CROWN OF ROSEMUND by Michele Ashman Bell

Michele Ashman Bell takes us back to 1498, a time generally referred to as the Medieval Age. She begins with a young princess, Rosemund, learning her parents have been murdered and her own life is in grave danger. Her parents’ most trusted advisor steals her away to a humble cabin deep in the forest where he sets about training her to defend herself and one day be the queen. For safety’s sake he dresses her as a boy and calls her Silas. He claims to be her/his grandfather.

The usurper, Sir Drake, controls the military and has no regard for the people’s rights or welfare. He lives in luxury at the castle while many people starve or lose their homes. Poverty, violence, and suspicion dominate the land. He is determined to find and kill the princess, clearing the way so that he can be crowned king.

A young man, Maxwell, from a nearby village and son of a well-to-do merchant, happens upon Silas and his grandfather. He is impressed by her training and skills, so he asks the grandfather to train him too. As they train in the martial arts and self-sustaining skills, they become fast friends. When tragic events signal it is time to unseat Sir Drake and claim her throne, she must reveal her true identity to Maxwell and a few others. Maxwell is, of course, shocked and confused to discover his close friend and pal is, in fact, a beautiful woman and a princess, his future queen. Nevertheless, he vows his fealty and together they set off to seize the throne that is rightfully hers.

This story, though not a fairy tale, reminded me of that genre I loved so much while growing up. It held me riveted to the pages. The characters are realistic, and the author has done a great job showing their flaws without lessening their overall likability. Rosemund is a strong female who learns to excel at masculine pursuits. Though she has weaknesses, she recognizes them and works to become stronger and face her fears whether emotional or physical. She also has gentle, caring instincts. I like that Maxwell’s greater physical strength doesn’t trump Rosemund’s skill and mental agility. I also like that he doesn’t become a doormat when he learns her true identity. Instead, he states his opinions while working to support her decisions. There are also a number of great secondary characters who enhance the story. Readers who like fast-paced action stories will love this one including the way the plot not only moves forward at a rapid pace, but provides several small climaxes before the overall denouement. There’s even a satisfying bit of romance to put the icing on an exceptional story

Michele Ashman Bell grew up in St. George, Utah. Though widely traveled, she and her husband still make their home in Utah. They are the parents of four children and thus far have seven grandchildren. She is the author of many books and Christmas stories. She has been a fitness instructor for forty years.

ISABELLE AND ALEXANDER By Rebecca Anderson

Isabelle and Alexander by Rebecca Andersonis a Victorian Romance that takes place around 1850, a time when the strict social distinctions of the Regency period were still in evidence in England, but were beginning to slip away. Isabelle doesn’t expect to marry for love, but only hopes to marry someone pleasant and respectable. Managing a household, being pleasant, well-groomed, and obedient are her expectations for herself.

Her marriage doesn’t go quite as she expected. She is actually a bargaining chip in her father’s business arrangement with an up-and-coming, young mill owner, the son of a village blacksmith. Though he is strong and handsome, he mostly ignores her. Without friends, family, or any kind of relationship with her husband, she feels lost and lonely until a terrible accident leaves her husband unable to walk. She faces terrible odds as she battles that periods medical solutions, trusting her instincts over an abusive medical team.  This is her chance to forge a lasting relationship with her husband.

Isabelle takes an interest in a young neighbor girl who is mentally challenged and whose parents are constantly pressured to send the girl to an institution. Another interest she discovers is her husband’s textile mill. Her involvement in the mill is a definite step outside the norm for this time period.

This story doesn’t contain a great deal of excitement and drama, but is a tale of steady, quiet perseverance winning the day. The characters are well-drawn and the reader follows their steady growth toward becoming stronger, better people. The setting is easy to visualize and realistic. The other  characters and the time period are blended well into the story. This is a story to read slowly to internalize the mental or thought processes.

Rebecca Anderson is married and the mother of four children. She is also a high school English teacher and the author of a good number of Romance novels.