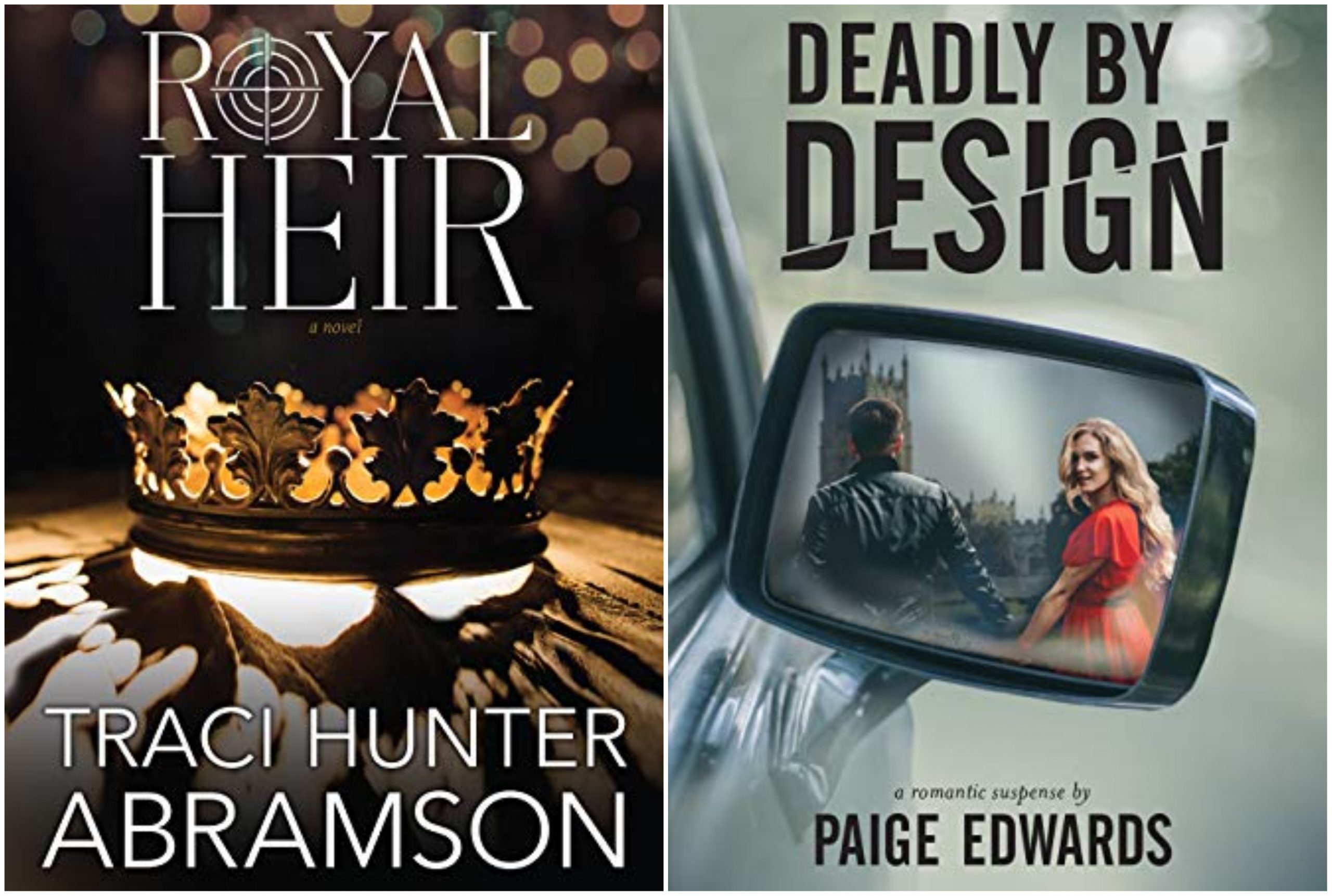 During this era of quarantines and worry over a world-wide epidemic might be a good time for a little distraction. Two Mystery/Suspense novels with a European flair that will entertain and distract are Royal Heir by Traci Hunter Abramson and Deadly by Design by Paige Edwards.

Traci Hunter Abramson’s newest novel, Royal Heir, is available now. Fans of Abramson’s “Royal” series have been anxiously awaiting this story featuring CIA agent Levi Marin and Princess Cassandra of Sereno. For those who have not been following this series, Sereno and Meridia are imaginary Mediterranean kingdoms in a contemporary setting. Though this is the fourth book in the series, it stands alone very well.

Following an assassination attempt on Princess Casandra’s life, she is whisked away to the neighboring kingdom of Meridia where Levi is assigned to protect her. While Levi concentrates on discovering the identity of the would-be assassin and deflecting possible threats, including discovering the motive behind the attack Cassandra worries about the safety of her father and two sisters. Sereno is in the process of negotiating the sale of its rich natural gas deposit, it has great potential as a Mediterranean tourist Mecca, and the jewels and art pieces of the royal family are priceless, making theft a strong motive. One other possibility exists. Could the attempt on the princess’s life be an attempt to prevent her from inheriting the kingdom? She is the oldest child and heir to the throne. There is also reason to believe someone on the inside of the castle is involved.

When Cassandra (Cassie) learns her father, the king, is dying of cancer both Levi and Cassie feel certain they have found the motive for the attempt. Cassie is anxious to return home to spend time with her father. Levi goes along to bolster the kingdom’s security defenses and to keep Cassie safe.

As expected, a romance evolves between Levi and Cassie, but it isn’t smooth sailing. Levi is an American and Cassie’s father is bitterly anti-American. Also Cassie is expected to marry within a royal or upper class family.

Abramson provides enough back story on her characters to make them plausible, then adds realism through their dialog and actions. Though her Royal series isn’t my personal favorite of her various series, she gives it the same careful research and attention to detail as found in her other books. Her background in intelligence and government service adds depth and realism to her novel’s background and plot. Danger and suspense will keep readers turning pages as quickly as possible to the very end.

Traci Hunter Abramson was born in Arizona, accomplished a study abroad program in Venezuela, graduated from Brigham Young University, then worked for the Central Intelligence Agency. She left the CIA to raise her children. She, her husband, and children live in Virginia where she coaches high school swimming. She has authored over two dozen books and has won multiple awards. She submits all of her novels to the CIA to ensure no classified information is used.

DEADLY BY DESIGN by Paige Edwards

Jack Pressley-Coombes is a racing fan. His expertise as a top Formula 1 engineer for Davis Racing Ltd. places him at the international Grand Prix where he witnesses a horrible crash. Something catches his eye. He studies the wreckage through binoculars and is shocked to discover his design on the burned out wreckage of a competitor’s car. The only way another company could have obtained that design is by theft.

Deadly Design by Paige Edwards begins with a shocking event, then the action slows to a crawl as Jack reunites with his sister’s best friend, whom he has had a crush on for a long time. They have strong feelings for each other and both are thinking of marriage, though they don’t communicate their thoughts and feelings well. He’s not only a committed member of the Church of Jesus Christ of Latter-day Saints, but extremely dense where women are concerned and she, Gillian, is abrupt and insecure. She’s also hiding a big secret. Soon he’s hiding a secret as well when the M1 detectives handling the case pair him undercover with a beautiful redheaded female detective to aid in searching for the person responsible for the theft of  the design. Pretending to be his girlfriend provides her cover for being in town. From this point on the story heats up to a sizzling hot suspense. Not only is he trying to keep Gillian from discovering his supposed relationship with another woman, she doesn’t want him to learn the child he believes is her cousin is actually her illegitimate daughter.

A series of odd happenings indicate more than the theft of design blueprints is involved. Someone with a great deal of tech savvy has messed with Jack’s computer. When his house erupts in flames while he is sleeping he suspects he is getting close to discovering the  perpetrator. Gillian has her own concerns. She loses her scholarship and the prestigious job offer that was to follow graduation. Homeless and without a job, she is responsible for the support of herself and her seven-year-old daughter.

Most of the events in this story take place in England and Scotland, though the wedding of Gillian’s best friend, Jack’s sister, takes place at the Washington D.C. temple. Of course, Jack and Gillian have significant roles in the wedding celebration. Edwards shows her firsthand familiarity with the cities and villages of England and Scotland. She also includes a few words familiar to English and Scottish people, but not so much to Americans.

The characters in this story feel realistic, but a little difficult to identify with. The major characters are American, but have lived in England or Scotland for an extended time. Both Jack and Gillian have some odd personality quirks. Gillian’s best friend, Catherine, is easily my favorite character. Those who enjoy English mysteries will like this one.

Paige Edwards has been awarded several awards for her books. She is committed to extensive research which includes travel to the places she writes about. She is active in her region’s community efforts. She, her husband, and children live in the mid-Atlantic area.