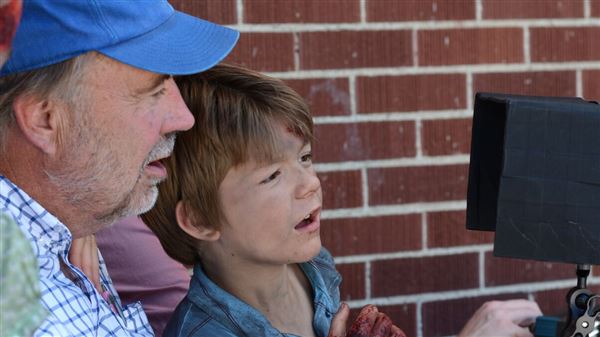 Interview: Filmmaker T.C. Christensen on the Miracle in Cokeville

T.C. Christensen loves a good story. The prolific writer-director-cinematographer, whose credits include 17 Miracles and Ephraim’s Rescue, has a passion for faith-promoting true stories that combine tragedy with divine intervention and heartbreak with hope. His latest, The Cokeville Miracle (read my review), portrays the events of a 1986 elementary school bombing, in which multiple children witnessed angels protecting them. I took the opportunity to talk with T.C. about the actual history, the making of the film, and looking for the hand of God in daily life.

JONATHAN DECKER: How did you first learn about this story? How did you decide to make it your next project?

86 I lived here in Utah. Like most people, I just heard about the facts on the news (the explosion and the kids), then it went away. It was in 2009 that a cousin of mine brought me the story and said, “You should look at this, it’s really your kind of film.” I liked what I heard, and I took a meeting with someone with the Cokeville Miracle Foundation, but at the time I had a few other projects I was going to do. This just kind of sat for a while until I finished Ephraim’s Rescue and then I jumped on it. I decided to make it my next project because it was the best story I could find. I’m going to make the best story that I can find, and that was Cokeville Miracle.

JD: In promoting the film, the hashtag #seemiracles is being used a lot. It seems that the film is encouraging people to recognize God’s hand, not just in this story, but everywhere. Why is this message so important to you?

TC: If it can touch people, it can change people. I really want my films to be accepted on an entertainment level, but beyond that I hope there’s some influence to inspire faith in God. I think that movies have a powerful influence for good or bad. Hopefully this film can do something to help people have a better life or realize that maybe their life is better than they thought it was.
JD: In terms of violence and destruction, what influences what you choose to portray and how you portray it? How do you straddle the line between showing too much and too little?

TC: This is the first film of mine where I’ve had an actual antagonist. In my pioneer films, the antagonist has been the weather. But I had a real bad guy in this one. Luckily, he didn’t really do too much (other than yell at the kids) until the bomb went off, and then he wasn’t in the room. But I do take every scene that he’s doing something mean and think, “Okay how far can I push this without making it unpalatable to my audience?” And that’s a nebulous thing, it really is. Most of those decisions come in editing. We show it to groups and to kids to determine “Hmmmm, we better shorten that, cut that.”

JD: How much of the film was shot on location in Cokeville?

TC: We filmed quite a bit of the exteriors in Cokeville. We couldn’t do everything there. Cokeville is a town of 535 people. It can’t take 60 people and put them in hotels and feed them in restaurants, taking all of us aboard, and what that would entail. So we stayed home in our beds here in Utah [where we] did primarily the interiors and went up there to do most of the exteriors.

JD: Tell us about the research that went into this. How involved were the actual families?

TC: Well, there were two books that had come out [When Angels Intervene and Witness to Miracles]. I read those, then we had two town hall meetings to which we invited anyone in the town who had anything to say. We had quite a few people that told us their feelings about it and anything they wanted us to know. Then Ron Tanner (my producing partner) and I began interviewing individual people. I decided pretty early on that I wanted to tell this story around the Hartley family, so we got to know Ron and Claudio Hartley, went up to their home in Star Valley, and had extensive talks and interviews with them.

JD: What can you tell us about the process of bringing history to life?

TC: One of the first things I had to do was determine the structure of the film. How would I tell this story? In college and I saw an Agatha Christie film called Death on the Nile. She used a very different narrative structure in that film. The event, the murder, happens about halfway through the film; in the second half you go back and investigate what really happened or what could have happened, and see all of these events in flashback, with different perspectives. I always thought that was interesting. I thought that structure would work terrifically for Cokeville Miracle. I applied that structure to this story, having the investigating sheriff Ron Hartley go back and try to reconstruct, from talking to people, what actually happened in that room.

JD: In what ways did you coax the necessary performances from the child actors without subjecting them to “too much?”

TC: I’ve worked with child actors a lot, and I get along with them, I respect them. The first thing is the casting. You have to really make sure you’ve got the right people in front of the camera. It was mostly, I think, fun for the kids, other than they got yelled at. Even when they were in the room there, doing those scenes, most of the time they were playing games in the background, then they might have a few lines. There were a few times when David Young gets mad and starts yelling at them, and the kids did not like that, which I think shows that the kids which we’d chosen were raised in good homes. They aren’t used to some guy yelling at them like that. I talked to each of their parents before we did some of those “yelling at” scenes and made sure they were okay with us doing it. If they weren’t, we took the child out of the room.

JD: In terms of the explosion and fire, how much of what we’re seeing are practical, on-location effects?

TC: Whenever there’s kids around, if there’s fire, and black smoke, it’s effects. My son Tanner did all of those, he does a terrific job. He also did the explosion of the bus. You can’t have kids around that stuff. I don’t know how we would have done this film 20 years ago, where you had to get all of these bomb effects on camera. But our kids were always safe and never around anything.

JD: What would you say to someone who is skeptical about divine intervention taking place in Cokeville, or in daily life?

TC: Here’s the thing I love about the Cokeville Miracle story: it isn’t one kid telling this story, it’s several kids that had these spiritual experiences. Not only do they stand as separate witnesses, but their parents do, because at the time, they talked to their parents and told them what they’d heard and seen. Now it’s 30 years later and the parents still verify what their kids said at the time. That’s a lot different than just having one person saying that they had a near-death experience and now they’re going to tell about it and later you find out it’s a hoax.

JD: The film seems targeted for a wider Christian audience. How has the film been received by members of other faiths?

TC: We screened the film, before it was locked off and finished, to a Catholic group in Salt Lake. In Dallas and in Boise we had a screening for some other Christians. We really have not had people point out to us “Hey, this looks like a Utah Mormon film!” or anything like that at all. They’ve accepted what was there. I think if they get on the internet and start poking around they’ll see that there is an LDS influence, both from me and from the fact that Cokeville is a heavily-LDS town. Still, it would not be fair to make this an LDS story. There were people of Catholic and Protestant faiths that were involved in the Cokeville miracle, so we wanted to take a wider Christian point of view.

JD: What’s next on the horizon for you? What can we look forward to?

TC: As I said earlier, I’m just looking for the best story I can find. I have a couple of ideas that I’m just starting to play with, but I try to finish whatever project I’m on before I get too heavily involved in whatever’s next. I’m not to the point where I can say “Yeah, I’m sold on the next idea yet,” so stay tuned!

Our thanks at Meridian to T.C. for his time and his considerable talents. The Cokeville Miracle is now playing in theaters. Click here to find showtimes and theaters, and visit the film’s Facebook page for more information.