“I Am Proud to be a Gay Son of God”: BYU Valedictorian’s Speech Gets National Attention | Meridian Magazine 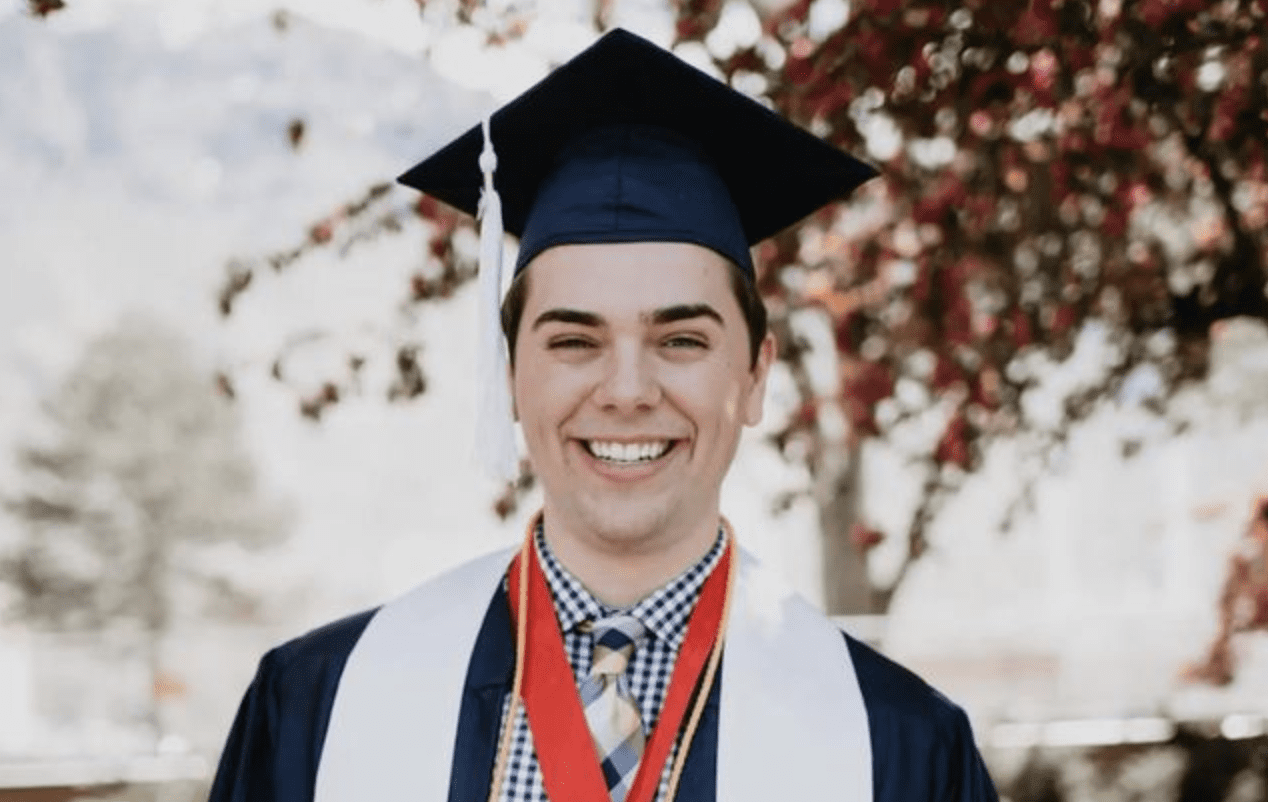 “I Am Proud to be a Gay Son of God”: BYU Valedictorian’s Speech Gets National Attention

Matt Easton, speaking before 1,135 graduates at the convocation of BYU’s College of Family, Home and Social Sciences used his speech to announce, “I am proud to be a gay son of God” on Friday during graduation exercises. He was surprised and overwhelmed to find that his speech would go viral with 165,000 views and growing as of this writing on YouTube and coverage in the press such as CNN, the Washington Post, Fox News and many more.

“I’ve never come out publicly before, I had to—only my close relatives and my close friends, not even all of my family knew,” the 24-year old Easton, who graduated in political science, told CNN.

Still this was not a rogue surprise to BYU officials. He submitted his speech two weeks earlier and was told by officials, “Go for it.” What surprised him and brought the press attention was that the BYU audience cheered for him.

“Four years ago, it would have been impossible for me to imagine that I would come out to my entire college,” he said. “It is a phenomenal feeling. And it is a victory for me in and of itself.”

“Congratulations to those who felt alone or afraid or uncertain while here. To those of us who have struggled with our faith and to those who have strengthened it. Congratulations my siblings of color, my LGBTQ friends, to students who are walking with mental illness, to all those who constantly have stood in the face of adversity to make our campus better for future generations. You are seen, you are loved, and today you are here to celebrate.”

He asserted, “I am not broken,” he declared. “I am loved and important to the plan of our great creator. Each of us are.”

He also testified, “The Atonement of Jesus Christ is perfect and everlasting and through our Savior we too can become perfect. . . . ‘For behold, this is my work and my glory—to bring to pass the immortality and eternal life of man.’ What could be better to celebrate.”

The Washington Post used the event as political commentary: “Mormons, who are the most consistently Republican-leaning religious group in the United States, are hardly alone in opposing same-sex relationships. The United Methodist Church voted last month to uphold its ban on same-sex marriage. And Roman Catholics, roiled by the clergy sexual abuse scandal, have shunned gay priests. But the Church of Jesus Christ of Latter-day Saints has been among the most steadfast in its traditional view of the family.

“A 1995 church document, “The Family: A Proclamation to the World,”declares that ‘marriage between a man and woman is ordained of God’ and that ‘gender is an essential characteristic of individual pre-mortal, mortal, and eternal identity and purpose.’ In a handbook for church leaders, only parts of which are publicly available online, there is some guidance on same-gender attraction and marriages, listed in the same section as instructions on pornography and ‘occult affiliation.’

“The issue is especially fraught at Brigham Young, which enrolls more than 30,000 undergraduates in Provo, Utah. The school enforces an honor code that requires chastity and forbids ‘not only sexual relations between members of the same sex, but all forms of physical intimacy that give expression to homosexual feelings.’

NBC noted, “The Church of Jesus Christ of Latter-day Saints has a doctrinal opposition to same-sex marriage and intimacy, but has been trying to stake out a compassionate stance toward LGBTQ members.”

For Easton, however, it was more personal, an announcement that in his wrestle with God he had come to terms with his sexuality and a hope that in being public about it, he could help make the world a little less lonely for others who feel marginalized.

President Nelson recently stressed how imortant it is to use the right words when referring to Church language. For example saying "Latter-Day Saints" instead of "Mormons," or "Church of Jesus-Christ ..." instead of "LDS Church," etc. So why borrow the word "Gay" from the LGBT community, when it often means engaging into a sexual relation with someone of the same sex? It would have been more appropriate for a Church-sponsored Educational Institution to refer to what General Authorities call "Same-Sex Attraction."

I, too, question the time and place of his announcement. It appears to not have been about the substance of his announcement, but was about him. Read the Book of Mormon. Read how pride was the recurring downfall of individuals, families, and civilizations. False pride, of any type, is quite destructive. Examples of this, from the past, and from today, are before us.