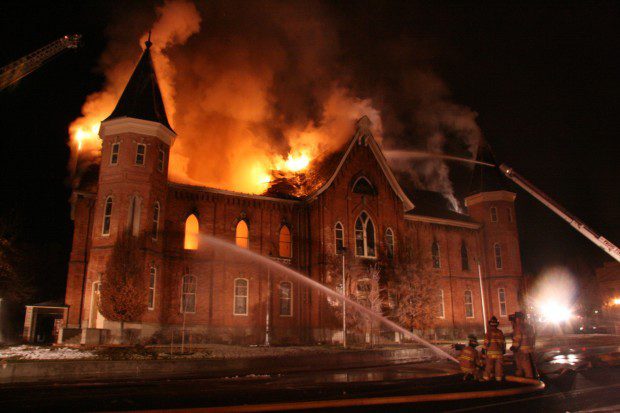 On December 17, 2010, when the Provo Tabernacle burned to a charred skeleton of its former self, we cried. These were tears for the sacrifice of pioneers that had been turned to ash, for the memories that had gone to smoke, for the scar left on the landscape where something lovely had been.

Now, five years later, rising like a phoenix from the fire, we have a temple and something more. We have a tangible reminder what the Lord can do when we assume all is ruined.

He is all about taking our hopelessly less than perfect lives and transforming us into mirrors of his glory—even though it sometimes seems impossible. How can you take a burned-out shell and make a temple? That is His work.

I recently wrote about those proverbial bad boys of the Book of Mormon Laman and Lemuel whose whines turned to murderous anger on their Wilderness Journey. Their sense of deprivation ate at them while Nephi exulted in gratitude at the Lord’s constant care.

What was the difference? They were all in the same grueling wilderness. It wasn’t just that Laman and Lemuel needed an attitude adjustment or would have profited from a good self-help book. No, we are told very specifically, “And they did murmur because they knew not the dealings of that God who had created them” (1 Nephi 2:12).

So here is the key question. What is it exactly they didn’t know about the “dealings of that God who had created them”? As the sons of a prophet, they certainly had heard that God existed. They had certainly heard the scriptures. They had gone through the motions of ritual. So what was the huge missing piece that they didn’t know about God that left them not just ignorant, but so miserable?

The question matters because we are all on a wilderness journey. The Book of Mormon prophets let us know in many ways that the wilderness journey is a spiritual metaphor for the mortal journey. We don’t want to be like Laman and Lemuel, griping and wailing at God when things are hard because we refuse to understand.

What is the missing piece for them or any of us when we are flailing? It is that we don’t know Him well enough to trust Him, really trust him. That means holding on with faith and serenity and even gratitude when the sand is blowing and the bow has broken and the meat is raw as it surely is often in our lives. Or when the Tabernacles of our lives burn and we can’t see the Temple we might become in the distance.

Nephi could unabashedly say, “I know in whom I have trusted.” This vital knowledge does not come from only giving lip service to God, or when we draw near unto Him with our mouth, but remove our hearts far from him. (See JSH 1:19).

We can either have a miserable wilderness journey in our lives, panicked and frightened and anxious and stressed, or we can invest to know God well enough to trust Him. That is a real investment of time and intent and devotion, but trusting God utterly changes our journey.

He has told us , “I will show unto the children of men that I am able to do mine own work (2 Nephi 27:21). His work is to do more glorious things with us than we have the capacity to comprehend just now in the wilderness, but we have no need to fear. We can abandon fear and replace it with trust.

Elder Jeffrey R. Holland said, “On that night of the greatest suffering that has ever taken place in the world or that ever will take place, the Savior said, ‘Peace I leave with you, my peace I give unto you…Let not your heart be troubled, neither let it be afraid” (John 14:27).

Similarly Joseph Smith said on his way to Carthage Jail that he would be martyred, “I go like a lamb to the slaughter but I am as calm as a summer’s morning.”

How can Jesus be one dispensing peace as he walks toward Gethsemane? How can Joseph speak of calm when he is riding to his inevitable murder? Can we also face life’s demolitions with such grace?

I once thought that when the Lord said, “Be not afraid,” these were words said to comfort us in the face of difficulty, like a mother saying “There, there” to a troubled child. But it is more than that.

Elder Holland said, “I submit to you, that may be one of the Savior’s commandments that is, even in the hearts of otherwise faithful Latter-day Saints, almost universally disobeyed; and yet I wonder whether our resistance to this invitation could be any more grievous to the Lord’s merciful heart?”

What? Being not afraid is a commandment? Why? Because if we live anxiously or fearful, constantly taking our spiritual temperature to see if we can handle what life brings, we fundamentally misunderstand who God is and what he’s about.

Elder Holland continues, explaining why our living in a fearful or anxious state would grieve the Lord : “I can tell you this as a parent: as concerned as I would be if somewhere in their lives one of my children were seriously troubled or unhappy or disobedient, nevertheless I would be infinitely more devastated if I felt that at such a time that child could not trust me to help or thought his or her interest was unimportant to me or unsafe in my care.

“In that same spirit, I am convinced that none of us can appreciate how deeply it wounds the loving heart of the Savior of the world when he finds that his people do not feel confident in his care or secure in his hands or trust in his commandments.”

What he suggests here is that anxious, over-wrought living is a manifestation that we do not understand the very nature of God and his personal, intimate care of us as his child.  Oh, we may be able to give lip-service to his attributes, reciting his characteristics of loving kindness with the best of them in Sunday School class, but it is in the hollow chambers of our own soul that we must make that knowledge soul-deep.

It is when life presents us or our loved ones with the challenges that harrow the heart, that we are left having to come straight up against it.  Is God who he says he is, and am I safe or have I only been giving lip service to a beautiful idea?

We truly do have to know God’s attributes in our very bones.  Elder Holland again, “Just because God is God, just because Christ is Christ, they cannot do other than care for us and bless us and help us if we will but come unto them, approaching their throne of grace in meekness and lowliness of heart. They can’t help but bless us. They have to. It is their nature.”

It is their nature to bless us and their capacity to do it perfectly. Elder Neal L. Maxwell said, “God, who knows the beginning from the end, knows, therefore, all that is in between. He could not safely see us through our individual allotments of ‘all these things’ that shall give us experience if He did not first know ‘all things.’

When Lorenzo Snow went on his mission to England in 1840, his 42-day sea voyage was particularly treacherous. Three different fierce storms arose threatening to swallow the ship he was on into the ocean. Sea travel in those days was dangerous at any time, but these storms with their mountain-high waves made the ship seem like a matchstick on the water.

He wrote of it, “In a number of instances, to say the least of it, the scene was fearfully terrific. I did not feel surprised that men, women and children who had not learned to trust in God, wrung their hands in an agony of fear, and wept. My trust was in Him who created the seas and defined their bounds. I was on His errand—I knew that I was sent on this mission by the authority He recognizes, and although the elements raged and the ship swayed and trembled amid the heaving billows, He was at the helm, and my life was safe in His keeping.”

Do we have enough faith to be so calm as life’s storms whorl around us?

We have a friend from Mali named Modibo. When he was just a child, his father said, “You must go to the village and get me some medicine.” Modibo was frightened at the request, because the village was some distance away, evening was coming, and he was just a vulnerable little child. Yet his father insisted that this journey was necessary.

Modibo began his journey feeling small and alone, and when he was some distance from home, it became dark and he was still far from the village. In Africa, night awakens the jungle predators, and this night was no different.

Alone, he trembled as he tried to be brave with each faltering step and listened to the rising sound of animals. Suddenly he became aware that there was noise in the bush not far from him. With more steps, he realized that an animal was following him, running parallel along the road. He was being stalked by a lion.

He tried to imagine where he could turn, but he realized running was no use. He could not out-run a lion. He wondered if he could escape up a tree, but he knew he couldn’t climb fast enough, nor bolt with enough grace to stop a lion. The moment grew tense, his breathing was shallow and fast.

Then, just as the lion was about to spring at him, a shot rang out, felling the beast. His father rushed into the scene and scooped little Modibo into his arms. His father had been there all along.

Unbeknownst to the little boy, his father had been with him in every step. He had never really been in danger. Modibo said it was the moment that courage was born in him.

So when the Provo Tabernacle burns or the wilderness journey of life bears down hard upon us, we can be certain that there is more to the story than currently meets the eye and that the Lord is making something more of us than we could make of ourselves. We can be certain that behind every challenge is a God in whose hands we can be confident, who doesn’t abandon us. What we can abandon instead is fear.

If we don’t trust Him, we haven’t yet come far enough in our quest to know Him. We haven’t fully realized the “dealings of that God who has created us.” He promises us that if we seek Him, we will find Him—and all else is easier from there.

Such a vital message in our time! We are never asked to fulfill something without the way already having been prepared. It is a perfect safety to walk by faith. And yet how quickly we embrace the fearful. It is a constant effort to keep our heart right with our Redeemer. Surely we are little children so easily distracted. Prayer is our lifeline. He can do with our hearts what we can not make right of ourselves. My mother's admonition, pray always, " Renew within my heart a right spirit." Truly magic words!

Thank you so much for this wakeup message. I will pass it along to my family.