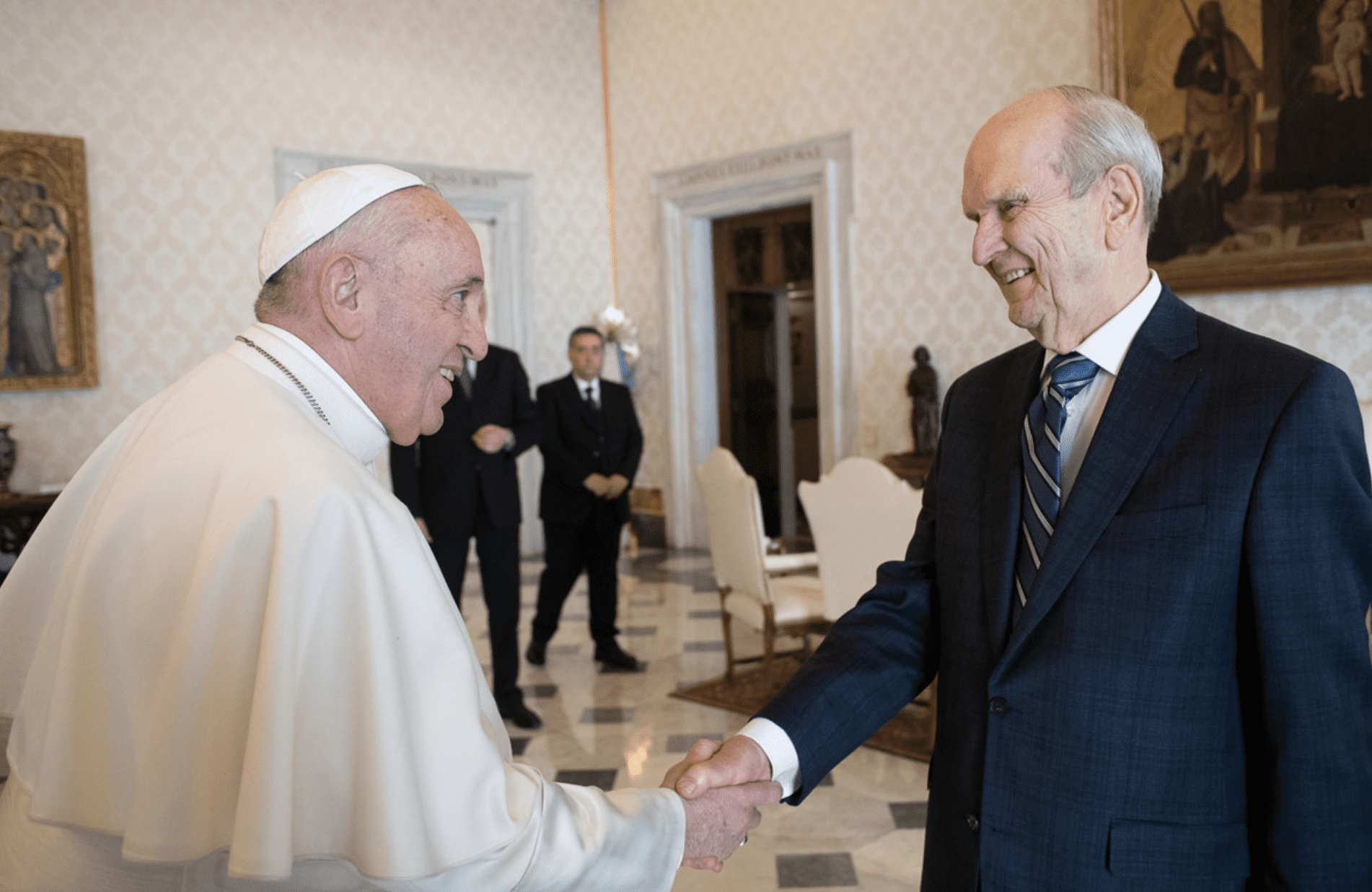 Historic Meeting Between President Nelson and Pope Francis at the Vatican

President Russell M. Nelson of The Church of Jesus Christ of Latter-day Saints met with Pope Francis inside the Vatican Saturday, the first meeting between a Latter-day Saint president and a pope. The visit comes a day before President Nelson dedicatesthe Church’s first temple in Rome. President Nelson was joined by President M. Russell Ballard of the Quorum of the Twelve Apostles.

Following the 33-minute meeting, President Nelson and President Ballard met with members of the media. “We had a most cordial, unforgettable experience. His Holiness, he was most gracious and warm and welcoming,” said President Nelson. He continued, “What a sweet, wonderful man he is, and how fortunate the Catholic people are to have such a gracious, concerned, loving and capable leader.”

President Nelson said, “We talked about our mutual concern for the people who suffer throughout the world and want to relieve human suffering. We talked about the importance of religious liberty, the importance of the family, our mutual concern for the youth of the Church, for the secularization of the world and the need for people to come to God and worship Him, pray to Him and have the stability that faith in Jesus Christ will bring in their lives.”

According to President Ballard, they spoke of the close relations the two faiths have in working together on humanitarian projects. “We explained to His Holiness that we work side by side, that we have projects with Catholic Relief Services all over the world in over 43 countries. [We’ve] been shoulder to shoulder as partners in trying to relieve suffering. He was very interested in that.”

Elder Alessandro Dini-Ciacci, a local leader in Rome, also attended the meeting. “How inspiring it was for me to witness two of the leaders of the leading faiths in the world meet together and share brotherhood,” he said. “This is beautiful to witness and something we can sure learn from in our association with people of other faiths.” Elder Massimo De Feo of the Seventy was present and said the leaders immediately connected. “It was a wonderful feeling to see how they seemed to be like old friends after a minute. President Nelson and Pope Francis share so much love and mutual respect for each other.”

Interfaith dialogue has been a practice of Latter-day Saint leaders from the founding days of the faith. Since becoming leader of The Church of Jesus Christ of Latter-day Saints in 2018, President Nelson has engaged with Roman Catholic prelates during several of his ministry stops. In Texas last November, he met with Archbishop Gustavo Garcia-Siller of the Catholic Archdiocese of San Antonio. And last month in Arizona, he spoke to Most Rev. Thomas J. Olmsted, Catholic Bishop of Phoenix. President Nelson has engaged in similar outreach many times in his 35 years of service as an apostle, traveling to more than 130 countries to minister to Latter-day Saints and friends of the faith.

President Nelson was interviewed in October 2018 by Sergio Rubin, the biographer of Pope Francis, during a ministry stop in Uruguay. President Nelson and Mr. Rubin briefly discussed the Rome Italy Temple. “We appreciate the kindness of the pope and the Vatican. They are most gracious in welcoming us,” the prophet said at the time.

Past interfaith dialogue between Catholics and Latter-day Saints at the Vatican includes President Henry B. Eyring (a counselor to the late Church President Thomas S. Monson) shaking hands with Pope Francis during a Vatican summit on marriage. In 2010, President Ballard visited Catholic leaders at the Vatican. In 1995, then-president Gordon B. Hinckley gave a copy of the Encyclopedia of Mormonism to the Vatican Library.

Catholic and Latter-day Saint leaders have also met in many other places. For example, in 2010 the late Cardinal Francis George (1937–2015), then the leader of the United States Conference of Catholic Bishops (USCCB), spoke at Brigham Young University and met with Latter-day Saint apostles. More recently, apostles have discussed issues of common ground with Cardinal Timothy Dolan, archbishop of New York. And several Catholic leaders have made visits to Utah. This includes Archbishop Joseph Kurtz of Louisville (then the president of the USCCB), who visited Temple Square in 2016, and Archbishop Charles J. Chaput of Philadelphia, who has spoken at Brigham Young University several times. In 2015, Archbishop Chaput invited Elder D. Todd Christofferson of the Quorum of the Twelve Apostles to share principles Latter-day Saints employ to strengthen families during the World Meeting of Families in Philadelphia.

In Utah, the Church has cultivated a strong relationship in recent decades with the Roman Catholic Diocese of Salt Lake City. President Ballard and Elder Christofferson joined Catholics in Utah for the installation of Bishop Oscar A. Solis, who was appointed by Pope Francis in 2017 to lead Catholics in Utah. “Latter-day Saints cherish the long-standing friendship we have developed with the Catholic community in Utah and around the world,” President Ballard said at the time. President Ballard also attended the installation mass for Archbishop John C. Wester in Santa Fe, New Mexico. Archbishop Wester, Bishop Solis’s predecessor, was the Catholic bishop in Utah for eight years.