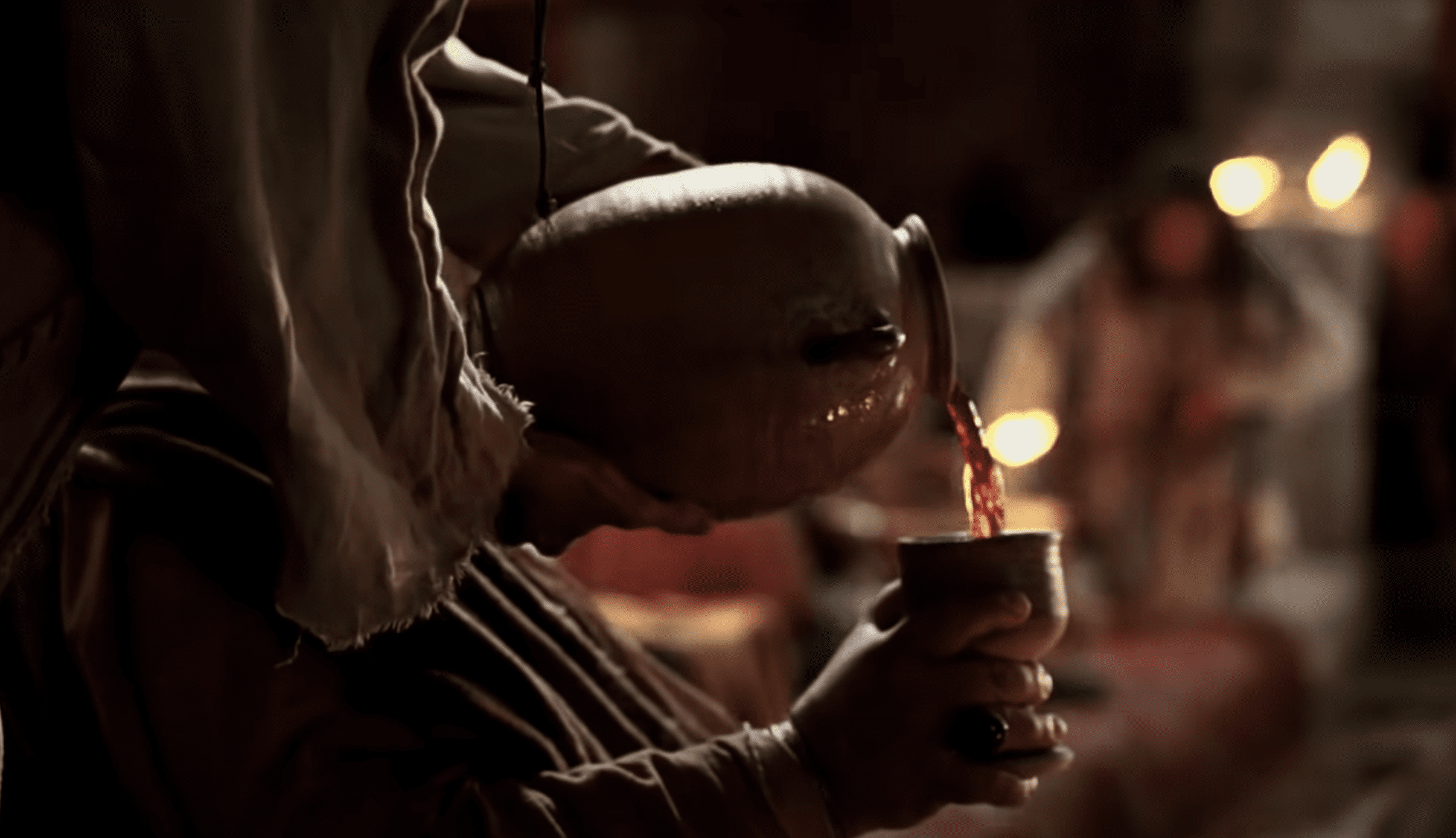 The following is the fifth in a series of articles giving greater detail from the stories behind the hidden things in our recently released Treasures from the Life of Jesus jigsaw puzzle. If you haven’t gotten yours yet, BUY IT HERE.

One of the eleven hidden things featured in our Treasures from the Life of Jesus jigsaw puzzle, is a jug meant to represent the first recorded miracle of Jesus’ ministry where he turned the water into wine at a wedding feast in Cana. We don’t hear often about this miracle as the inspiration for someone’s testimony or understanding of the nature of Christ. In fact, it may even baffle some why it was the first miracle of His ministry or why it happened at all.

But there are a few profound lessons we may be missing when we skim past this incident and on to more dramatic or intimately personal miracles performed by Christ later on in his ministry. First, let’s review what happened, as recorded in the second chapter of John.

Jesus, his disciples, and his mother were in attendance at a marriage in Cana. Mary, the mother of Jesus learned that they had run out of wine and told her son as much. His answer?:

4 Jesus saith unto her, Woman, what have I to do with thee? mine hour is not yet come.

5 His mother saith unto the servants, Whatsoever he saith unto you, do it.

6 And there were set there six waterpots of stone, after the manner of the purifying of the Jews, containing two or three firkins apiece.

7 Jesus saith unto them, Fill the waterpots with water. And they filled them up to the brim.

8 And he saith unto them, Draw out now, and bear unto the governor of the feast. And they bare it.

And when the ruler of the feast tasted this new wine (that had been but water only moments earlier), he called to the bridegroom and commented that it was customary to give the best wine at first and bring out the worst wine once the guests “have well drunk”, but at this wedding, they seemed to have saved the best for last.

“The beginning of miracles did Jesus in Cana of Galilee”, it reads in John 2:11, “and manifested forth his glory; and his disciples believed on him.”

It was the first miracle the disciples witnessed from Jesus and it helped plant those seeds of belief on Him, but what are we to learn from this specific miracle and the circumstances that brought it about?

Here are three of those lessons:

1. The Lord’s Respect for Women

To our modern ears, Christ’s response to His mother may seem flippant or unfeeling: “Woman, what have I to do with thee?”. But further study opens the real intent and true impact of this response to our hearts and minds. In Joseph Smith’s inspired translation[i] of this verse, it reads instead, “Woman, what wilt thou have me to do for thee? That will I do; for mine hour is not yet come.” This difference in translation brings to light Jesus’ loyalty and deference to His mother. Not only does He say He is willing to do whatever she needs, but He also gives her an opportunity to specify a request in faith rather than just telling her what He will do. It is she, not He, that then turns to the servants to direct the next move.

Additionally, even the very title with which He addresses her is significant. According to a March 2015 Ensign article by Robert and Marie Lund,[ii] “One scholar explains, ‘‘Woman,’ or, rather, ‘Lady,’ is in Greek a title of respect, used even in addressing queens.’ It was as though He said to His mother, “My lady, whatsoever you ask of me in faith, I will grant it unto you.” This account shows that the Savior was interested in the routine pressures that women faced. Jesus Christ honored His mother by offering to help her with her burdens and responsibilities.

And this illustration of Jesus’ respect for women was only the beginning of many indications throughout His ministry that that was the case. There’s good reason that the majority of all of the women featured in the standard works appear in the four gospels. As Elder James E. Talmage put it, “the world’s greatest champion of woman and womanhood is Jesus the Christ.” He demonstrated it through his gentle treatment of the woman of Samaria at the well. He knew the details of her life that made others shun her and He still testified of her potential for purity and salvation through the living water that He could offer.

He demonstrated it through his compassion for the woman taken in adultery even in the face of great disdain and judgment from all those that surrounded Him. He demonstrated it as he wept with Mary and Martha about the loss of a brother He knew He would be able to bring back. He demonstrated it by noticing the touch of His hem by the woman with the issue of blood. Even in a bustling crowd, He felt and cared for the distresses of one woman. And of course, He demonstrated it by making Mary Magdalene the first witness of the resurrection, reminding us that women are capable and worthy of the very greatest spiritual manifestations available in mortality.

2. The Way Christ’s Miracles Would Model the Work of His Father

In a conference address given in April 1989, President Howard W. Hunter spoke about the nature of miracles both in our lives and those performed during the life and ministry of Jesus Christ. He said:

But startling and wonder-filled as they were, Christ’s many miracles were only reflections of those greater marvels which his Father had performed before him and continues to perform all around us. Indeed, the Savior’s humble performance of such obviously divine acts may be just one very special application of the declarations he made:

“The Son can do nothing of himself, but what he seeth the Father do: for what things soever he doeth, these also doeth the Son likewise” (John 5:19) and “I do nothing of myself; but as my Father hath taught me” (John 8:28).

President Hunter went on to explain that the first miracle of Jesus’ ministry when He turned water to wine is a perfect example of the idea that all that Christ did was a reflection of what His father had already done:

But poor, indeed, was the making of the wine in the pots of stone, compared with its original making in the beauty of the vine and the abundance of the swelling grapes. No one could explain the onetime miracle at the wedding feast, but then neither could they explain the everyday miracle of the splendor of the vineyard itself.[iii]

We too often take for granted the everyday splendor of the vineyard, waiting instead for our water to be turned to wine. When Jesus stepped forward volunteering to be the Savior of the World, He said, “Father, thy will be done and the glory be thine forever” (Moses 4:2). Everything He would do would be to help us all to better understand and glorify His Father. And this first miracle was only the beginning of that.

3. The Illustration that He Would Transform Us All Into Something Greater

In a BYU devotional given by Merrill J. and Marilyn S. Bateman in January of 2002, Elder Bateman points out that in the context of the exchange between Mary and Jesus, Christ mentions that His hour had not yet come. Realizing this, Elder Bateman asks the question that we each should be asking in relationship to this miracle:

It is undeniable that Christ’s hour would be the performance of that greatest act of love—the atonement—while in the Garden of Gethsemane and on the cross. So, how is the conversion of a water to wine a symbol of the atonement?

It says right in the verses that the water pots being used were made of stone “after the manner of the purifying of the Jews”. In the first century C.E., most temple rites and rituals were performed with stone vessels because it was believed that unlike ceramic or clay, a stone vessel couldn’t be rendered impure.[iv]

If Christ is the pure vessel and we are the water surrendering fully to Him, then the transformation that occurs seems to be symbolic of how we can be made new creatures through His atonement. Or as Elder Bateman puts it:

The power to convert water to wine might parallel the power of Christ’s atonement to change men and women from mortal to immortal beings, to transform corruptible bodies into incorruptible ones, to create an inseparable connection between body and spirit in the Resurrection (see 1 Corinthians 15:42–44; D&C 93:33–34). In short, the miracle at Cana not only illustrated Christ’s power to change the earthly element of water to wine but also His power to “cleanse” and “purify,” to lift men and women from mortality to immortality—from an earthly to a celestial state.

Sometimes we probably fear fully giving ourselves over to Jesus Christ. We don’t allow ourselves to be immersed in His purity because we fear the responsibility or fear disappearing inside the stone vessel completely, but once He applies His miraculous power, we are drawn out again and have become a better version of ourselves than we could ever imagined.

I hope that when you come across our water pot in the Treasures from the Life of Jesus jigsaw puzzle, you no longer think of the wedding at Cana as a miracle with not much to explore or study. I hope you remember the way Jesus showed his respect for women in that place, how He modeled his miracles after the cosmic miracles of His Father in Heaven, and how we—like the wine—can be changed completely through the purity and atonement of Jesus Christ.

I feel that among all His miracles, this may well be the most significant. In my moments of fearing I or those I love may never overcome our weaknesses, knowing that the Savior has the power to change our very natures drives that fear away.

The miracle of turning water into wine could possibly be Jesus’ greatest scientific miracle. In healing the sick, the body just re-organizes / re-orders itself. In raising the dead, the lifeless body is simply brought back to life. In killing the fig tree, it’s the opposite... no great scientific changes have occurred. But consider Cana: It is estimated there are from 800 to 1,000 different organic chemical compounds in wine. And yet, water consists of no organic compounds and just one inorganic compound: two-parts hydrogen to one-part oxygen. The scientific miracle, then, was “Just how did that plain ol’ inorganic water become 800-1000 organic compounds?" That’s pretty neat!