Hidden Things: Who Are the Lost Sheep that Jesus Spoke Of? | Meridian Magazine 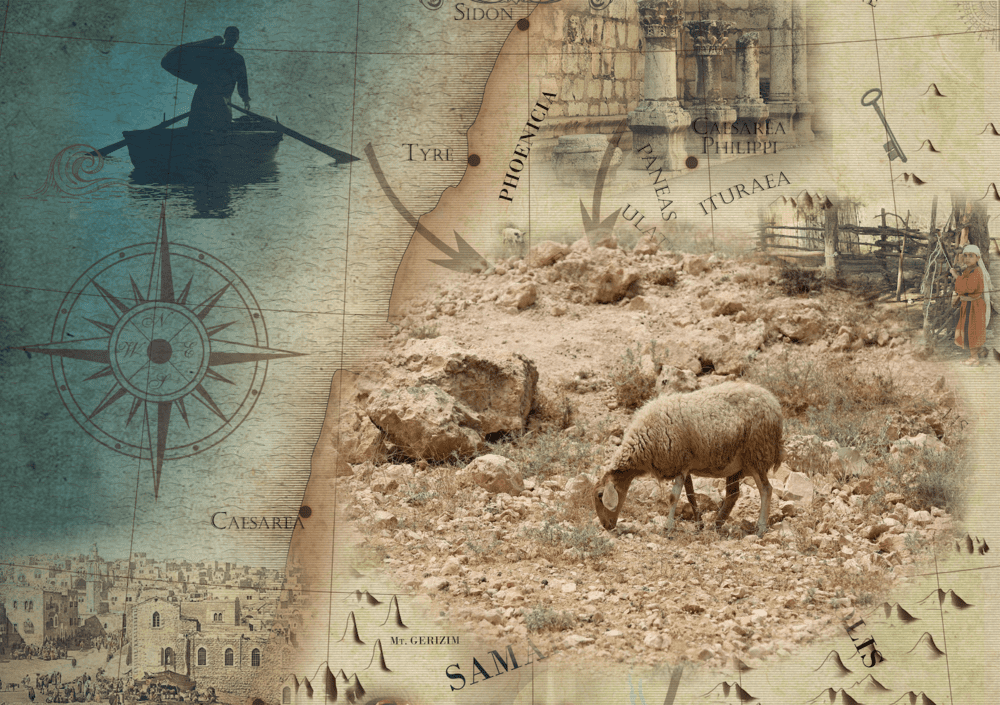 Hidden Things: Who Are the Lost Sheep that Jesus Spoke Of?

The following is the third in a series of articles giving greater detail from the stories behind the hidden things in our recently released Treasures from the Life of Jesus jigsaw puzzle. If you haven’t gotten yours yet, BUY IT HERE.

Today is the LAST DAY to order puzzles and have them guaranteed to be delivered before Easter, so now is your chance to get that perfect gift for your family or friends.

When we were deciding what items should be included on our list of “hidden things” in the Treasures from the Life of Jesus jigsaw puzzle, a lost sheep seemed an obvious one. After all, it is a parable that already involves finding something initially missing and bringing it back to the light.

Let us take a moment to read the words of the parable, given by Jesus when he was being criticized by the pharisees for associating with people they deemed unworthy:

2 And the Pharisees and scribes murmured, saying, This man receiveth sinners, and eateth with them.

3 ¶ And he spake this parable unto them, saying,

4 What man of you, having an hundred sheep, if he lose one of them, doth not leave the ninety and nine in the wilderness, and go after that which is lost, until he find it?

5 And when he hath found it, he layeth it on his shoulders, rejoicing.

6 And when he cometh home, he calleth together his friends and neighbours, saying unto them, Rejoice with me; for I have found my sheep which was lost.

7 I say unto you, that likewise joy shall be in heaven over one sinner that repenteth, more than over ninety and nine just persons, which need no repentance.

When we hear this story, who do we envision? Who has the Good Shepherd left behind and who is He going out to find? Often talks and articles that discuss this parable talk about inactive members of the Church, wayward children, or those who are actively disaffected. It wasn’t until reading several of these kinds of addresses that I realized that I’ve always imagined that the lost sheep is me.

I’ve been active in the Church all my life, made efforts to attend meetings whenever and wherever in the world I found myself—even when it meant taking the disdain of my high school teacher who scoffed when I said I would be leaving our traveling group behind for the morning to go to church and he called out after me, “say hi to God for me!” as I walked out into the rain to find where the Edinburgh Ward might be meeting.

And yet, anytime the unfailingly beautiful strains of Come Thou Fount of Every Blessing ring out in a meeting or event and the words, “prone to wander, Lord, I feel it” come up—I feel it.

In an address entitled He Will Place You On His Shoulders and Carry You Home, Elder Dieter F. Uchtdorf shares of his harrowing childhood experience watching the night sky light up with the bombing that was coming down on his native Germany during the war. He says:

Not far from where my family lived was the city of Dresden. Those who lived there witnessed perhaps a thousand times what I had seen. Massive firestorms, caused by thousands of tons of explosives, swept through Dresden, destroying more than 90 percent of the city and leaving little but rubble and ash in their wake.

In a very short time, the city once nicknamed the “Jewel Box” was no more. Erich Kästner, a German author, wrote of the destruction, “In a thousand years was her beauty built, in one night was it utterly destroyed.” During my childhood I could not imagine how the destruction of a war our own people had started could ever be overcome. The world around us appeared totally hopeless and without any future.

Strangely, I wept as I read this brief account and particularly that assessment from the German author. In some ways we—as spirit children of promise who lived long before this mortal sojourn—are not unlike Dresden. In a thousand years was our beauty built and at birth it was all but completely forgotten as we had to learn from scratch in tiny, new body and a fallen world that would bring us joy, but also couldn’t help but disappoint us.

We are, as Paul said in his epistle to the Hebrews, “strangers and pilgrims on the earth” and we often feel the chasm between the ancient yearning for all we could and should be and the mortal, natural man reality of what we too often are. The gap leaves us frustrated and, perhaps looking for comfort, we are prone to wander. Lord, I feel it.

What is to be done? The Lord has assured us that He would leave the ninety and nine to seek us, but do we simply sit and wait in the meantime?

Elder Uchtdorf addresses this too:

While our loving Father desires that all of His children return to Him, He will force no one to heaven. God will not rescue us against our will.

So what must we do?

His invitation is simple:

This is how we show Him that we want to be rescued.

It requires a little faith. But do not despair. If you cannot muster faith right now, begin with hope.

So, how do we draw near to Him? How, though we wander, can we ensure that our wandering will bring us closer to the eternal destination that we seek?

“Obedience”, says Elder Uchtdorf, “is the lifeblood of faith. It is by obedience that we gather light into our souls.”

Obedience is often misunderstood. To make us obedient is not the Lord’s ultimate goal, but a means to His joyful ends. He is our maker and He knows better than we ever could, what we can do to become the best and happiest version of ourselves. The commandments are there to be a manual—direct from the manufacturer–to the optimal functioning of our souls.

The structure of those commandments can give us a direction for finding our way back to Him even when we feel far from the Spirit or know we are living below our privileges in terms of the revelation we would hope to be worthy to receive.

I am reminded of a passage from C.S. Lewis’ The Screwtape Letters when a senior devil is advising his nephew on the processes and procedures of leading man astray and says:

Do not be deceived, Wormwood. Our cause is never more in danger than when a human, no longer desiring, but still intending, to do our Enemy’s will, looks round upon a universe from which every trace of Him seems to have vanished, and asks why he has been forsaken, and still obeys.

Sometimes we do look out at our universe and we don’t see Him, but it’s not because He isn’t there. We are the ones who have wandered.

But He has left the ninety and nine to come looking for us and obedience is the way we can ensure that we are found.

Elder Uchtdorf returned to Dresden 70 years after it had been destroyed and “it is, once again, a ‘Jewel Box’ of a city. The ruins have been cleared, and the city is restored, even improved.” Likewise, life on this earth wasn’t mean to render us rubble with no offers to rebuild. The Lord has vision for us, greater even than the vision we have for ourselves and He will take the bricks of ourselves that feel scattered and unworthy and build us into something even greater than before, if we’ll let Him.

And what of the ninety and nine He left behind to come looking for us? Who are they? Christ says they are “ninety and nine just persons who need no repentance” and what that means to me is that there are no ninety and nine. In all the history of the world, if you searched every age and population, you could not find 99 people that had no need of repentance.

We are all the lost sheep.

And we are all being earnestly sought by the Good Shepherd.

So, when you find your own lost sheep in the Treasures from the Life of Jesus jigsaw puzzle, be careful not to assume it represents someone else while you comfortably sit among the flock that has already been found. We will need to be found again and again throughout our lives, but never fear, our Shepherd will never stop looking.

A beautiful talk that spoke peace and hope to me. Thank you

Good job Mariah! wonderful insights that I had never before thought of! I love to read your articles!