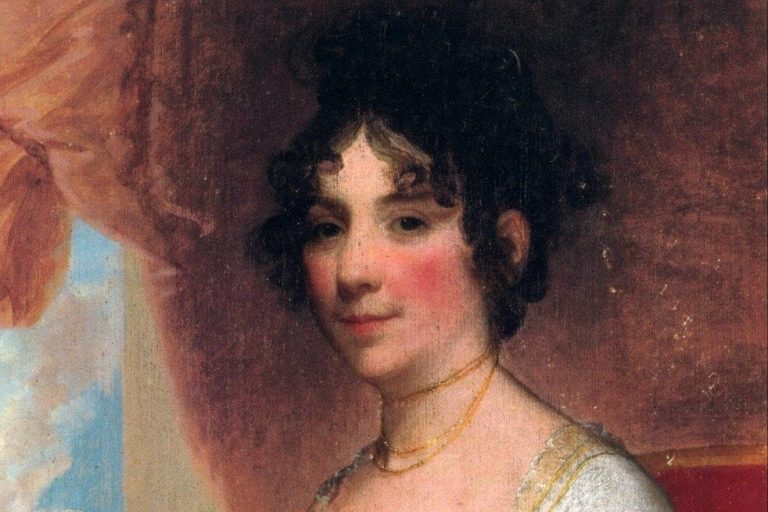 Forging Character During an Epidemic: The Example of Dolley Madison

From August 1 through November 9, 1793, Philadelphia, which was then serving as the nation’s capital, was ravaged by one of the most severe epidemics in American history. The fever, as it was called, was transmitted by mosquitoes and took the lives of 1 out of every 10 Philadelphians, totaling over 5,000 deaths. Dolley Madison, America’s “first, First Lady,” was among those who suffered great loss at the hand of the fever, but never lost hope. Here is that part of her story as told in Dolley and James Madison: An Unlikely Love Story that Saved America:

“As had become all too common in the Payne and Todd households however, sadness and sorrow soon followed in a series of deepening trials, which would shake Dolley’s faith. It began when her father finally succumbed to the infirmities that had plagued him during his waning years, dying quietly in his bed, surrounded by family. John died a broken man, who was nevertheless grateful to be alive to witness the birth of his grandson and namesake. Happiness soon returned to the Todd household, however, in a matter of months with the birth of a second son, William Temple Todd, on Independence Day, July 4, 1793. William was named after Dolley’s brother, who had died at sea. Once again, Dolley found renewed purpose in caring for baby William and his quickly growing older brother, Payne.

Not long after William’s birth, an almost unbearable tragedy befell this promising young family. As a yellow fever epidemic ravaged Philadelphia with a vengeance, often bringing a quick and painful death to many of those who were stricken with it, the Todds were not spared. As this awful epidemic claimed victims throughout the Todd neighborhood in Philadelphia, John, ever a loving husband and father, recognized that Dolley and their infant son William were in a precariously weakened state and were directly threatened by the dreaded disease. Deeply worried, John did what many residents of Philadelphia were doing in response to the crisis – he took Dolley and the boys to Grey’s Ferry, some distance from Philadelphia and the quickly spreading disease. It was a location where his immediate family would be less likely to suffer a mosquito bite and contract the fever.

John, however, had personal and business matters in Philadelphia and was compelled to return to the city, where he could address the needs of his growing client base and care for his parents who were battling the disease. John worked long hours while away from Dolley and his family keeping his law practice in order and spending any free time dutifully and lovingly caring for his ailing parents. Despite their son’s valiant efforts, John’s parents became increasingly weak as the disease took its toll stage by ugly stage. John grieved as he watched helplessly as his parents died within just ten days of each other.

Sadly, John had lingered too long in Philadelphia and soon fell ill himself. He was severely weakened by the hours he had spent working in his law practice and caring for his parents. Nevertheless, with the knowledge that the disease that now claimed his weakening body was transmitted by mosquitoes and was not otherwise contagious, he drew on his remaining reserve of strength and struggled to return to be with Dolley and their sons. He made it to Grey’s Ferry, but by that time the disease had progressed to the point that there was little that Dolley could do other than lovingly care for and suffer with her dying husband. His life ebbed slowly away from his now frail body, which was wracked by the fever and the awful symptoms that appeared daily.

To compound matters, baby William also became sick with yellow fever. Still weak from childbirth, Dolley did what she could to comfort and care for her husband and their newborn son. It is difficult to conceive of Dolley’s feelings as she watched first her beloved husband, and later her newborn son, suffer each new and exceedingly dreadful symptom of the disease that afflicted them. Dolley watched helplessly as her husband’s fever spiked, causing severe chills, a jaundicing (or yellowing) of his once lucent skin, bleeding, and the progressive suffering that attended the slow failure of the victim’s organs. As her husband suffered unto death, Dolley was terrified when it became evident that baby William was also experiencing fevers, shaking, and other early symptoms of the disease. The illness progressed quickly, almost mercifully, with William. The fevers grew in their intensity and were followed by vomiting until there was little left other than retching. William’s little, frail body became too weak to convulse any longer. As he suffered in his mother’s powerless arms, Dolley’s hope waned. When the progressing fever and vomiting turned to bleeding and the yellowing of her young son’s skin, Dolley despaired at being unable to offer any real comfort to her dying child and husband.

As death drew closer, first for John and later in the same day for William, Dolley offered final words of love to her young husband but seemed unable to find words to speak to her dying son. The only respite from the dreaded disease and its symptoms proved to be death. Despite Dolley’s insistent prayers and loving efforts, both John and William tragically died just hours apart on October 23, 1793, leaving behind a grieving, almost inconsolable mother and wife whose loss was deep and dark. All hope seemed to have been sucked from a once effervescent young woman. Solace is always slow in coming during such tragedies and seldom fully softens such blows over time.

Dolley continued to stoically suffer her loss for years to come. It had a significant impact on her, maturing Dolley beyond her young age and creating a fear that she might somehow lose her remaining son Payne. She was comforted in some measure by the teachings of her Quaker faith. She had been taught and internalized that death is a mystery, but Friends (as Quakers call themselves) were also convinced that life and love have a timeless quality. The comfort of her faith was nevertheless tempered by a questioning of how a loving God could permit such untimely deaths, bringing sorrow and often doubt to all who are left to suffer such profound loss.

Dolley’s faith never fully alleviated the grief she felt, but it did provide a measure of hope and comfort. However young and grief-stricken she was, Dolley had little time to feel sorry for herself. As a Quaker and a single mother with one remaining child, it was essential that she quickly refocus her indomitable will and fragile faith on the day-to-day challenge of merely surviving. In an act that required great strength and focus, she forced herself to concentrate on the demands of the present. Dolley was forced to be resilient, to face her new world darkened by the loss of loved ones and a realization that she had to find a way to provide for her needs and the needs of her remaining son.

Despite her desire to believe that her loved ones were in a “fixed” and loving state of existence, the immense weight of the grief and loss associated with October, the month when her loved ones died, was so palpable that every October thereafter was a month of darkness and depression for Dolley until she joined her loved ones in death. The fall beauty and the vibrant changing of colors in autumn in Virginia later provided some comfort, but that solace was incomplete. Her despondency seemed to be confirmed by the dimming of the colors and the fall of leaves all around her as the autumn turned inexorably to winter. Understandably, Dolley was never able to fully shake the sense of darkness abiding in her soul because of her suffering in that awful October in Philadelphia.

In time, she received a measure of comfort from her second loving husband, James, as he shared in carrying the weight of loss borne by the companion he loved with all his heart. As is often the case with people of faith, those trials had a somewhat salutary impact on Dolley that helped her develop resiliency and a capacity to face the trials that arise in every life with a strength of character and an even greater faith and resilience.

That reservoir of strength carried Dolley throughout a life of public service that all too often involved ugly attacks directed at herself and James. No attack would ever come close to hurting Dolley in the way her early loss did. Dolley’s strength, in turn, succored James, when he faced trials during his years of public service and as he approached death.

As the threat of contracting the yellow fever subsided, a despondent Dolley initially joined other residents and members of the government in slowly returning to Philadelphia in November, when freezing temperatures put an end to the hot and humid breeding grounds that had fed the yellow fever carrying mosquitoes. Her grief was shared by many of those returning, who had also lost loved ones. It was as if a dark cloud hung over the City of Brotherly Love. Of necessity, Dolley, like most of those around her, threw herself into her pressing responsibilities – her work, which offered an awkward and incomplete form of therapy. * * *

Ever sociable, Dolley also craved company beyond the circle of her immediate family to help her deal with her grief. Dolley and Payne spent time at her mother’s boarding house where she found social and emotional nourishment in boarders, friends, and activities. It was there that she came to know Aaron Burr, one of Mary’s boarders, who was then a respected leader in the Democratic-Republican Party. At this time, prior to his fall from grace, Burr retained the respect of his colleagues in government and regularly interacted with his former classmate James Madison, a man who was about to become a very important part Dolley’s life, changing it in more ways than she could have ever imagined.”

It was Burr who brought new hope into Dolley’s life, when he introduced her to a most unlikely suitor, his classmate James Madison. Their courtship and critical role in bringing America safely through a seemingly hopeless war with equanimity and grace is a tale for our times and a reminder that hope does, indeed, spring eternal.

Dolley’s experiences, painful as they were, helped forge her character. She developed a heightened sense of charity or love for others and a capacity for empathy that endeared her to the American people and earned her the title of the Mother of American Civility.

Rodney K. Smith is a scholar in residence and directs the Center for Constitutional Studies at Utah Valley University. He is the author of JAMES MADISON: The Father of Religious Liberty and DOLLEY AND JAMES MADISON: An Unlikely Love Story that Saved America.

Thank you for sharing this touching story. By the way, it wasn't until the late 19th century that a theory developed that the disease was caused by a mosquito, much later than described in this article. The connection to the Aedis aegypti mosquito was finally confirmed 1900 in Cuba by Dr. Walter Reed's research time. Prior to that period of time, yellow fever was thought to be caused by "atmospheric miasmata" (germs polluting the atmosphere).