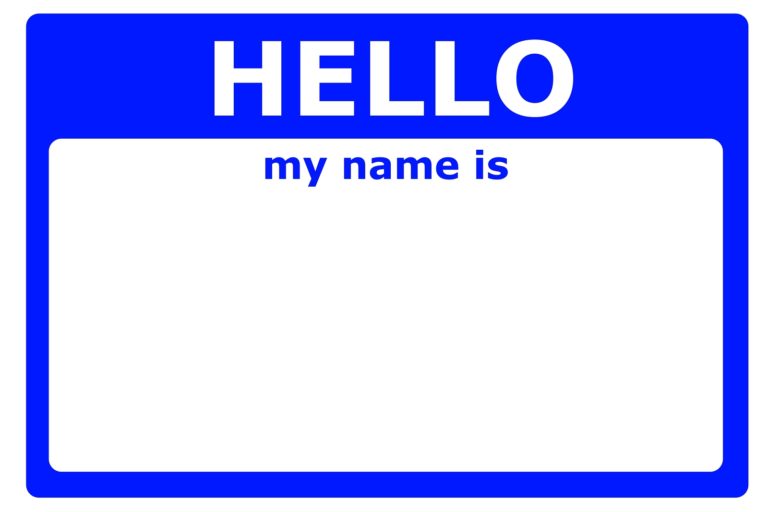 Do Heavenly Father and Jesus Christ Know your Name?

The Church Almanac contains a boatload of fascinating facts. For example, if a conversation drifts to the question of what the most common first names in The Church of Jesus Christ of Latter-day Saints are, you can quote the 2013 Almanac: “Maria, the identification word for nearly 400,000 individuals, is the most frequent name by a 200,000-name margin over the next top name in the Church.

“The second top name is the most frequent male name, José. About 100,000 names below that is the next most frequent name, David, that is followed more closely by other male names of Juan, Michael, and Luis. Male, because their contemporary frequency on the female side of things, are by now still named Maria.

“Finally we come to the second most popular female name. No. 7 on the chart of most popular LDS names: Ana. The roughly 85,000 Ana’s of the Church are followed by another spate of male names—Carlos, John, Robert, James, Daniel, William, and Jorge—before coming to the third female name, Rosa, followed immediately by Mary and Patricia” (Deseret News, The Church Almanac, 2013).

Names order life. They label who is who and who did or will do what. Recently in our ward sacrament meeting, a returned mission president and his wife were to speak. Missionaries who served with them filled the first five rows in the chapel. The printed program read that Lincoln Clark, a nice young father in our ward, would give the opening prayer. Lincoln was seated behind me on the back row of the chapel. When the opening hymn concluded, Lincoln stood up to go to the podium then abruptly stopped when he saw one of the missionaries walking to the podium to pray. What are the chances there would be another Lincoln Clark in our ward that day?

Perhaps these young men were named Lincoln because it is a family name. Perhaps Abraham Lincoln was the inspiration. Perhaps Lincoln was just popular at the time, which is likely because in the past 150 years, Lincoln has been in the top fifty of boys’ names.

While looking at these lists, I saw the most popular girls’ name in 2018 was Emma. You may have an Emma or two in your family. I have a granddaughter Emma who was born in 2018 and a grandmother Emma who was born in 1894. When I was born, the most popular girl’s name was Mary. I am a Mary, named after my Aunt Mary and my grandfather Lynn. My parents joined Mary and Lynn and spelled it Marilynne. People who don’t know me usually call me Marilyn. Because my name is most often mispronounced, I have wondered, do Heavenly Father and Jesus know how to pronounce my name?

I think so because I know the story of Joseph Millett, an early settler of Spring Valley, Utah. In 1871, he wrote in his journal:

“One of my children came in, and said that Brother… Hall’s folks were out of bread. Had none that day. I put our flour in [a] sack to send up to Brother Hall’s. Just then Brother Hall came in.

“Says I, Brother Hall, are you out for flour?
“Brother Millett, we have none.
“Well, Brother Hall, there is some in that sack. I have divided and was going to send it to you. Your children told mine that you were out.

“Brother Hall began to cry. Said he had tried others. Could not get any. Went to the cedars and prayed to the Lord and the Lord told him to go to Joseph Millett.

“Well, Brother Hall, you needn’t bring this back if the Lord sent you for it. You don’t owe me for it.

“You can’t tell how good it made me feel to know that the Lord knew that there was such a person as Joseph Millett.” (You can watch the video at https://www.churchofjesuschrist.org/media-library/video/2011-02-50-joseph-millett-story?lang=eng.)

Each name, no matter how common, uncommon, or how it’s pronounced, represents a real person and testifies to the omnipotence of God. My friend’s husband, son, and two sons-in-law are all named Mark. In conversation, Mark is her husband, Mark plus his middle name is her son, and the sons-in-law always have their wives’ names or last names attached. Heavenly Father knows to whom you are referring without a last name. When someone prays: “Please bless Maria,” Heavenly Father knows which Maria of the 400,000 to bless. The Almanac writer concluded: “The listing of names… are people with real lives of challenges and commitment, real people with unique personalities and talents.”

As parents name their children, so God named the first man. “And the first man of all men have I called Adam” (Moses 1:34). God then instructed Adam to name the woman. “And Adam called his wife’s name Eve” (Genesis 3:20). God assigned Adam the task of naming the animals. “And out of the ground the Lord God formed every beast of the field, and every fowl of the air; and brought them unto Adam to see what he would call them: and whatsoever Adam called every living creature, that was the name thereof” (Genesis 2:19-20).

Lehi prophesied in a blessing to his son Joseph that the name of the prophet of the restoration would be Joseph and that his father’s name would also be Joseph (see 2 Nephi 3:15). Josiah’s name was prophesied in the Old Testament more than 250 years before he was born (see 1 Kings 13:2). The Lord knew Jeremiah before he was born (see Jeremiah 1:5).

The name Ezekiel was used as a sign of God’s omnipotence. “Thus Ezekiel is unto you a sign: according to all that he hath done shall ye do: and when this cometh, ye shall know that I am the Lord God” (Ezekiel 24:24). Friends and relatives expected the baby born to Elisabeth and Zacharias to be named after his father. “But the angel had said unto him, Fear not, Zacharias: for thy prayer is heard; and thy wife Elisabeth shall bear thee a son, and thou shalt call his name John” (Luke 1:13). The angel told Mary to name her firstborn son Jesus (Luke 2:21).

In thinking of tender uses of names in scripture, I think of three men named Joseph. Can you imagine the shock turned joy when Joseph who was sold into Egypt said to his brothers, “I am Joseph” (Genesis 45:3). When Joseph who was to become the husband of Mary was visited by an angel, the angel greeted him with his name and lineage, “Joseph, thou son of David” (Matthew 1:20). What a moment of truth came to fourteen-year-old Joseph Smith when the first word spoken to him by God the Eternal Father was “Joseph.” (See Joseph Smith-History 1:17).

My friend’s grandson Brit, a newly returned missionary, stood in a corner of a fast food restaurant waiting for several mission friends to join him. A man approached him and asked, “Are you Christian?” Brit thought, “WOW.  Even here in Utah I am being asked about Jesus Christ.” After some pleasantries, the man said, “Let me buy you a cheeseburger and we can talk about the construction project.” Brit was confused. “What project?” he asked. Now the man was confused. “You are Christian aren’t you?” “Yes,” said Brit, realizing the mix-up. “I am a Christian, but my name is Brit.”

In both the New Testament and Book of Mormon, followers of Christ are called Christians. “All those who were true believers in Christ took upon them, gladly, the name of Christ, or Christians as they were called, because of their belief in Christ who should come” (Alma 46:15). (See also Acts 11:26.)

Of all the names of all the billions of people who have lived on earth, the sacred name and title of Jesus Christ surpasses all. His is the only “name given under heaven whereby man can be saved” (2 Nephi 31:21). Jesus explained: “Therefore, whatsoever ye shall do, ye shall do it in my name; therefore ye shall call the church in my name; and ye shall call upon the Father in my name” (3 Nephi 27:7).

The Living Christ, The Testimony of the Apostles, is a sacred review of some of His names and responsibilities: “Great Jehovah… Messiah… creator of the earth… Firstborn of the Father… Only Begotten Son… Redeemer… first fruits of them that slept… Risen Lord… Living Christ… advocate with the Father… Only Begotten of the Father… chief cornerstone… King of Kings… Lord of Lords… Son of God… King Immanuel… the light, life, and the hope of the world… divine Son.”

From Elder Jeffrey R. Holland’s talk, “The Grandeur of God,” we can glean some of the names of our Heavenly Father: “God our Eternal Father… Father in Heaven… God… God, the Eternal Father… the only true God… Father… Elohim… the Father [who] weeps… a personal, living God… who knows our names, hears and answers prayers, and cherishes us” (churchofjesuschrist.org/study/general-conference/2003/10/the-grandeur-of-god?lang=eng, italics added).

Yes. Our Eternal Father and His Beloved Son know your name and mine, and we are privileged to know theirs.

My parents named me "Nulon Chalmers Sanford, III", a very unusual name, then nicknamed me "Chuck". When I was baptized over 48 years ago, I knew my Heavenly Father knew me, by name, and had things for me to do in mortality. He still assigns things to me. He still knows my name.

I've been reassured several times by the Spirit that the duplicated names of many of my ancestors are each known, even if I have trouble telling who's who. Having birth or death dates really helps, though!