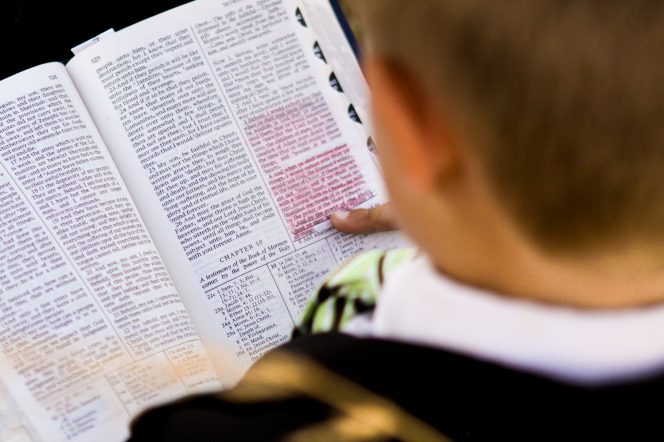 With regard to matters of ancient history, and particularly with regard to the New Testament, the scholarly consensus shifts, the arguments are never decisive, and all is uncertainty.

With the Book of Mormon, however, the Lord removes the ambiguity, and makes the options clear.

No dependence upon the sifting of ancient textual variants.

No doubtful reconstruction of long-vanished and very foreign cultures.

In modern times, amid abundant historical documentation, he gives us

the Book of Mormon;

Which contains the record of a fallen people, and the fulness of the gospel of Jesus Christ to the Gentiles and to the Jews also;

Which was given by inspiration, and is confirmed to others by the ministering of angels, and is declared unto the world by them —

Proving to the world that the holy scriptures are true, and that God does inspire men and call them to his holy work in this age and generation, as well as in generations of old;

Thereby showing that he is the same God yesterday, today, and forever.[1]

No more the question, If then, why not now?

Book of Mormon authors knew in advance that Jesus would come to earth and take upon himself a physical body (and they knew the approximate time of his coming).

Several saw him before his mortal advent.

They knew his name-title, “Jesus Christ.”

They knew the name and the virginity of his mother.

They knew the place of his birth.

They foresaw his baptism, including its location and other specific details of the ministry of John the Baptist.

They knew that he would call twelve apostles to assist in his ministry.

King Benjamin prophesied of his many miracles.

They expected his atoning death by crucifixion, knowing also of the three days of darkness that would intervene before his resurrection.

They understood the sacrifices of the law of Moses as foreshadowing his sacrifice.

The Book of Mormon confirms the authenticity of many of the sayings ascribed to Jesus in the New Testament gospels.

To read more from Daniel C. Peterson on this topic, click here.