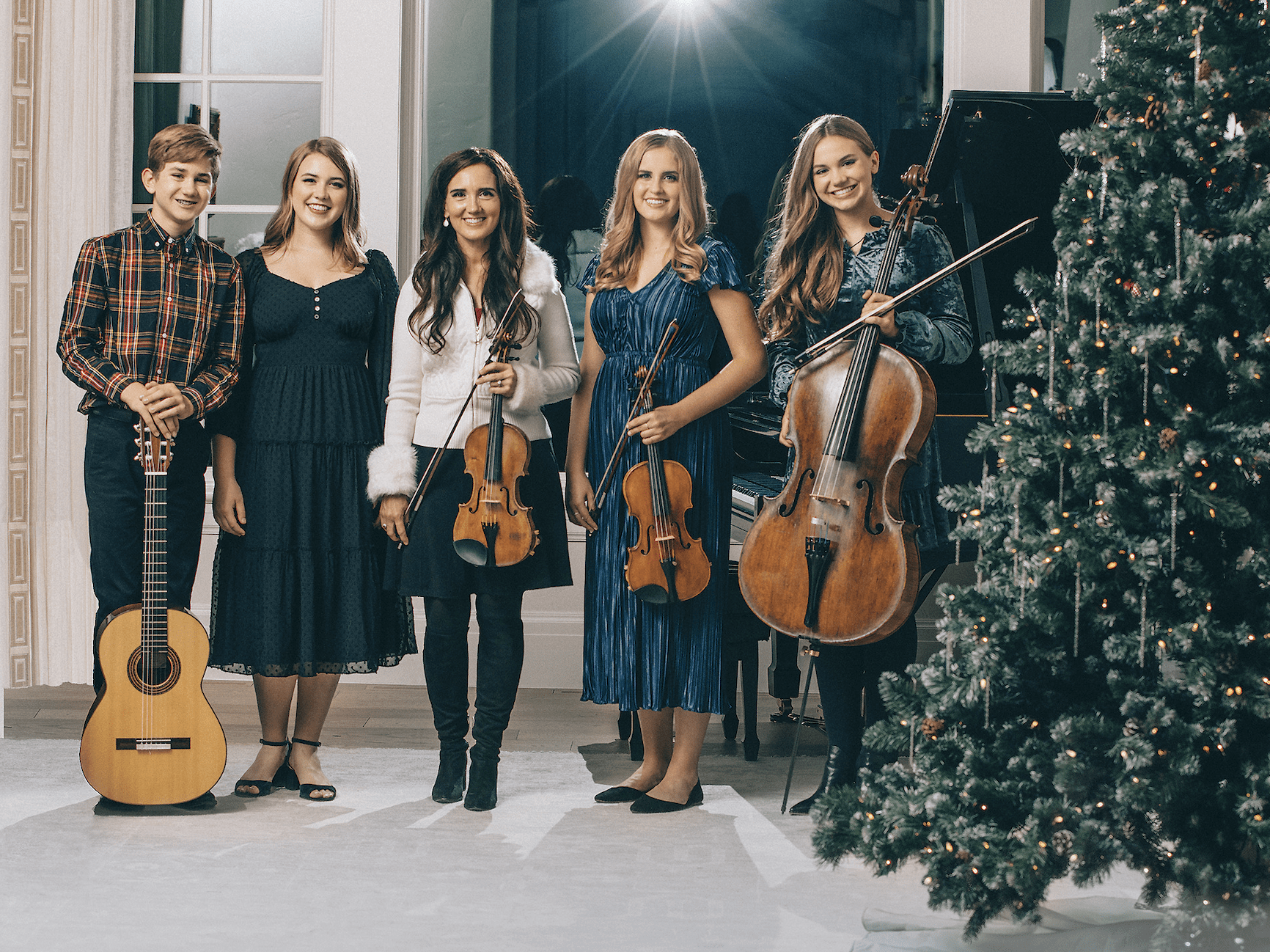 It’s bound to happen, and it did to Jenny Oaks Baker. Her children, who perform with her, called the Family Four, are now down to three as her eldest daughter, Laura, headed off for a mission to Portugal, by way of a long stop in Seattle where she currently serves.

Change is one of those inevitabilities in life, no matter how much you cherish this day, and the children do grow up, scatter and fly, Jenny’s other children are also on the brink. Laura’s younger sister, Hannah, is a senior in high school and sending off audition tapes to 13 schools across the United States, and three in the UK where she hopes to study piano performance. Sarah, a sophomore and a cellist, also plans on a music career that will take her far away for study. Both practice their instruments four hours a day. The youngest, Matthew, is in 8th grade, so he has a few years left, but truly, Jenny can see the die is cast.

While most families would send off their missionary with a family dinner, Jenny and her four children took the opportunity to make one last album—a Christmas album–before Laura, a violinist, left. Called “Joy to the World”, it’s a celebration of Christ, just out this week, and Jenny hopes that like her other albums, it will head to a top placement on the Billboard list.

The traditional favorites, as arranged by Kurt Bestor, take a lively variation on themes we have loved. “O Come All Ye Faithful” is really celebratory. “Joy to the World’ is a Celtic number and “so much fun” says Jenny. “Do You Hear What I Hear?” has Hebraic undertones and “Lo, How a Rose E’er Blooming” is Old English. The combination of the beloved and familiar with the exploration of additional themes makes the music compelling and refreshes old favorites.

How Does Jenny Feel?

What does Jenny feel about seeing her children fly, leaving considerable absences in their performing family group? She said, “Our lives are constantly changing. There is a time and a season. Our lives will be completely different, and I will be entering a new phase of my career after 10 years of performing with the children. We’ll have a child here and a child there, and I may find myself mainly as a soloist again.”

What assuages her as she sees this change is this. “Happily, I know it is what the Lord would want.” Laura had not been intending to go on a mission, but began praying about it last March and received an answer to her prayer that she should go.

Of her own direction in life, she said, “I diligently practiced my whole life, and I always knew that the Lord had a plan for me, but I never knew what it was. What I knew was that I was supposed to work really hard and try to keep the commandments and follow the Spirit and then someday I would understand what my path was.”

She and her husband, Matthew, met in New York, married, and then moved to Washington DC where he had a job, the same year that she graduated from Juilliard. Here, she was offered a job with the National Symphony where she was first violin. “This is a great life’s path,” she thought. “This will work for me.”

A year later she had a baby, and then, during the five years she was with the symphony, she had four babies. With that demand at home, she began to wonder about being a part of the symphony at this point. Yet, nobody ever retired from the exclusive positions at the National Symphony. It’s not what people did. She prayed about it and received the answer that she should resign. The personnel manager was, to say the least, surprised.

After her last performance, Jenny went out to the parking lot, got in her car and cried. Just then a Latter-day Saint woman, Hannah Smith, an attorney specializing in religious freedom law came and knocked on her window out of the blue. “We had never met before. She asked why I was crying,” Jenny said. “It was such a witness that I was being cared for in my hour of need, because, she had done the same thing—refocusing her life on her family while she put her career on hold.”

When her father, Elder Dallin H. Oaks saw what a struggle she was having, he told her, “It’s not about you, Jenny.”

A Shift in Plans

Jenny quit the symphony without one musical plan for her future. Her only plan was to be an intentional, present mother, but the very next day, she began to get calls from conductors asking her to solo. She did some of that, but mostly she was home. “I was taking care of kids all of the time. I threw myself into developing my kid’s talents, and then as I took a few more concerts, they got to be good enough to put them on the program.

The logistics of this have not always been easy. “Oh, it’s a lot of work,” she acknowledged, “even just packing up and getting coordinating gowns and ties, because they were always growing. I had to make sure that everybody was ready with their individual parts, that everyone was memorized and I’m memorized. Did we remember the cello stool and the guitar capo? It just blows my mind. I had to make massive lists.”

Then there were the logistics of hauling keyboards and instruments and speakers and microphones, sometimes to remote places to perform.

Blessings from the Lord made it all possible. Almost from the beginning, the talented Kurt Bestor wrote their arrangements. He began when the four children were very young with an arrangement of “It’s a Small World” that included the flavor of composers like Bach and Mozart in places, making it a musical small world. See the video here.

They have been able to perform at the Garden Tomb in Israel and the Garden of Gethsemane. They did a music video based on the Sound of Music in Salzburg.

Jenny says, “For me, my greatest joy as a violinist is performing with our children, and I feel like the Lord gave us an incredible opportunity in performing for President Nelson’s birthday celebration concert. If that is our swan song as a family, it could not have gotten better. It was the crowning moment of my musical life and my family life—performing for the prophet, and all the leaders of the church, with the Tabernacle Choir in the Conference Center, it just couldn’t have gotten better for me.

If Jenny knows how to let her children fly, she says she learned that from her mother. Yes, when Laura gets home, there may be a few more performances, even another album, but the family is heading in different directions.

She said, “I don’t want to hold them back, in order to do what’s best for me. I want them to fly. I had a mother, who found out she had cancer in July and she sent me off to Juilliard in August. I said to her, “Mom, do you want me to stay? I will.” She said, “No,” and I want to do that for my children.

“She was bedridden that whole year long while Dad was at work. He would come home and check on her, and he didn’t work as long of hours as he did before she was sick, but he had responsibilities as an apostle of the Lord that year and still traveled. She sent away her daughter to go pursue her dreams and stayed in bed sick. She could have said, “I want you to stay home, but she didn’t want me to. She wanted me to fly as she raised me to fly, so I want to do that for my children. “

Jenny said this about her new album:

We are TRYING TO HIT NO. 1 ON THE BILLBOARD CHARTS this week, so if you are still considering buying  “Joy to the World”, please do so before Monday Nov 23rd on my website (so I can sign it for you) or before Nov 25th at Deseret Book. It makes a great gift!

If you prefer to download digital files, here is the ITUNES LINK.
And if you stream your music, here is the APPLE MUSIC LINK.
Album is available for downloading and streaming beginning Friday November 20th.

Here’s a video of “The First Noel” from the album.

I love this family! My very shy granddaughter played her violin with them in the Temple Square program they do with the young students. My granddaughter dropped her music during a practice song and ran off the stage embarrassed. Hannah talked to her and boosted her confidence and helped so much! I sat so close on the balcony during the performance at the tabernacle and loved watching the families expressions and love for each other and these young performing kids.