As I See It: How the #LighttheWorld Giving Machines Lit our Grandchildren | Meridian Magazine 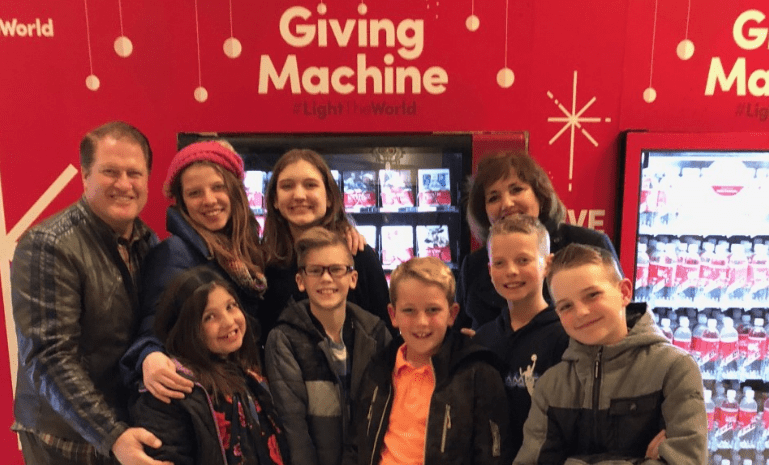 As I See It: How the #LighttheWorld Giving Machines Lit our Grandchildren

At Christmas time, I get really tired of the stuff you buy in the store, and so as the years have passed, and we seem to be drowning in material goods, I have begun to look for other gifts to give at Christmas that have more meaning.

This year we hit a grand slam with our seven oldest grandchildren, ages 10 to 17, more than I ever dreamed possible. We got tickets for them to go with us to see “A Christmas Carol” at Hale Center Theater. Before their eyes, Scrooge transformed from one who wouldn’t donate to the Christmas collection to help the poor, but asked instead, “Are there no prisons? Are there no workhouses?” and became a new man, who pledged to make a difference in the world.

We saw the play together and then with that context, we headed with the grandchildren to the Joseph Smith Memorial Building to the #LighttheWorld giving machines and told them that this year instead of giving them a present, we were going to help them give a present to someone else. We shivered through the cold air as we walked from the parking lot, laughing, talking, singing and dancing, sometimes forming poses for the camera. Everyone was high at the thought of giving something significant to somebody who really needed it.

At the Joseph Smith Memorial building, even the lines of people waiting to use the vending machines seemed cheerful—all these people wanting to help added to the contagion of good will. We told our grandchildren that they would each have a budget to spend on the giving machine and we told them some of the options they could choose from. Each would have a turn to make his or her own choice.

When their turns came, each studied the options carefully, taking the choice most seriously—and then they chose. Three of the boys pooled their money and bought a goat. Brody chose two chickens. Madison gave one hundred meals. Audrey gave a school uniform. Kate gave an infant resuscitation kit. They were so happy.

On the way home in the car, each told why he or she had made their particular choice. “I thought of how much I love our new baby cousin,” said Kate, “and I wouldn’t want anything to happen to him. I had to do the resuscitation kit.” “Think what a hundred meals would mean to a family,” said Madison. We were touched by their thoughtful sentiments, but most moved when they said with a bit of Christmas glee, “We don’t want you to ever give us a regular Christmas present again. We want to come to the giving machines every Christmas!”

Thanks to vision of The Church of Jesus Christ of Latter-day Saints who made giving something significant to a person in need so easy to do and for lighting our grandchildren this season.

We gave each other a goat for Christmas this year and in addition our children and grandchildren either received 2 ducks or 2 chickens. This can all be done online also, since we did not have access to the vending machines. We have received very positive comments. This will become the presents from now on, and we may even extend them to birthdays.

What a wonderful story! And your grandchildren aren't the only ones who need this possibility! The genius, in my opinion, is how it makes the giving personal, connecting the giver and the unmet need.