A 20 Cent Light Bulb and Other Cheap Deceivers

When my last article (The Power of Three) was published here at Meridian on June 3, it appeared simultaneously with Dr. Gardner’s powerful concluding article and program for coping with sugar addiction. (“Sugar, The Great Deceiver – Part 3.”) The message was obvious: “The Lord is telling us something important! Meridian is doing its part to help us be a healthy people!”

Within the next few days, our home teacher came by. His message was Elder Uchtdorf’s powerful message from the Priesthood Session of this past April’s General Conference: “We Are Doing A Great Work and Cannot Come Down.” As a quick review, in this talk he shared the story of a jumbo jet that crashed into the Florida Everglades over 30 years ago killing over 100 people. The captain and crew had became so preoccupied with tracking the malfunctioning of an unimportant light bulb, that they did not notice the plane had started an irreversible descent. Upon examination after the tragedy, experts agreed that there was not one other significant mechanical problem to cause the plane’s demise.

Says Elder Uchtdorf, “Of course the malfunctioning light bulb didn’t cause the accident; it happened because the crew placed its focus on something that seemed to matter at the moment while losing sight of what mattered most.”

The cost of that light bulb? An estimated 20 cents … and over 100 human lives! A great deceiver indeed!

Fascinating, isn’t it? How something so very cheap, just a few cents, changed the course of so many, many individuals and families? In a similar way, other cheap deceivers can change the course of an hour, a day, several days or even longer – precious periods of time that had started out with a full measure of self-promise for healthy living.

I doubt that I am alone when I report that the unexpected appearance of Wal-Mart chocolate candy or CostCo baked goods has easily derailed many healthy choices that I may have made earlier in the day or week. These are not expensive items. In monetary terms, twenty-five to fifty cents or a dollar at most is all they’re worth: It may be the decidedly inferior chocolate chip cookie purchased from some neighborhood children at a lemonade stand, a secretary’s candy dish of m & ms at work, over-sized, cheap donuts in the staff lunchroom, a child’s abandoned birthday party goodie bag, teenagers with chocolate stashes in bedrooms, forgotten leftover cookie dough or ice cream in the back of the refrigerator discovered while cleaning things – they’ve all deceived me more than once. No pointing fingers …. Ever! We’re all in this together with a hug of acceptance that defines mortality and the earth life experience. Yet, we’re meant for higher and better things in this life and the next.

In reality these cheap deceivers are not too different than Elder Uchtdorf’s light bulb. In and of themselves, they’re nothing! The power we often allow them to hold, however is mighty and release does not come cheap.

For example, at my work there are warm chocolate chip cookies served at lunch time each and every Thursday. As the aroma of these freshly baked confections surrounded us recently, one of my co-workers who has been vigilant with her healthy eating (and it shows!) announced, “I’m going to give in!” “No!” I replied. “Be strong!” She sincerely responded “But I don’t want to be strong right now. I want a cookie.” Well said. In truth, these so-called “goodies” are “bad-dies” whose miniscule financial price often hides a hidden surcharge that may take hours or days to pay off and dissolve. In the bigger picture, the long-term health costs may be impossible to estimate in terms of illness, disease, time off from work, even hospitalization, early death, etc.

For those of us (me!) whose hearts beat and whose hands instinctively reach for these “baddies” even when we are consciously aware of the consequences, perhaps a better encouragement and mantra than “be strong” is “Keep calm.”

These are surely the Savior’s intentions for us when he said “Peace I leave with you, my peace I give unto you: not as the world giveth, give I unto you. Let not your heart be troubled, neither let it be afraid” (John 14:27)

In keeping with that divine counsel, perhaps you’ve heard about the “Keep Calm and Carry On” posters from London. The history is fascinating: During the Spring of 1939 when the war with Germany was almost inevitable, the British Government’s Ministry of Information commissioned a number of bright red posters to be displayed throughout the country upon the outbreak of war. The plan for the posters was to relay a message from King George VI to his people that all capable measures to defend the country were being taken.

Using the crown of King George VI as the only graphic element, it read simply “Keep Calm and Carry On.” Although some of the posters did make it to walls, the poster was never officially issued and so remained almost unseen by the general public. That is, until a copy turned up recently within a box of dusty books purchased from auction.” 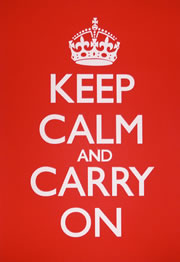 With the current difficult economic times and world turmoil, they are now being produced and have become popular in England. (See my link below for ordering one for your kitchen and home!)

Now, back to our own difficult times: Although we’ve read about it and personally experienced sugar overload countless times, it’s important to remember (and isn’t that why we go to Church every Sunday? To be reminded of things we already know?) the physiological impact we experience: Consuming refined sugar causes an immediate spike in blood sugar, then a quick descent that leaves us hungry and wanting a quick “fix” once again. The nasty “baddie” has laid claim to the inner workings and the chemistry balance of our system for a time, undermining our mood, ability to concentrate and power to stay focused.

Says our own Dr. Gardner: “The problem with sugar ingestion before it gets into the stomach where absorption takes place is the neurochemical changes that sugar triggers in the brain. These are related to actual tongue stimulation, which sets off immediate changes in the brain. The brain, unfamiliar with this type of onslaught, evidences behaviors that are not uncommonly seen in children, such as hyperactivity, anxiety, crankiness, diminished concentration and depression. All of these can significantly affect school performance. Some people experience drowsiness instead of hyperactivity. Interestingly, recently presented data at a neuropsychopharmacology conference demonstrated that some of these neurochemical changes are the same changes that occur in people ingesting alcohol and other addictive substances. Clearly, sugar is one of those addictive substances. (For a detailed review of how sugar attacks the body immediately, review Dr. Gardner’s article links below.)

It’s incredible, isn’t it? Satan’s plan on every front is eternally the same: to cheapen, to undermine, to upset, to confuse, to misalign and to cause distress and this is exactly what eating cheap, sugar food items does to the human body. It’s almost as though since he doesn’t have a body, he’s jealously determined to mess-up how we care for and use ours.

Years ago as a Young Women Advisor, one of my Laurels coped beautifully with juvenile diabetes. I’ve thought of her often and may have mentioned her before. When I asked her how she managed with not being able to eat foods the others were eating she cheerfully replied “Oh, I know they taste good, but that’s all. They’re really not good for anybody!”

In some respects she was almost lucky: wise eating was not a choice, but a basic for her. I confess to being almost a little envious! Why? Because, I, like you if you’ve read this far in this article, am a sincere but very mortal and immature child of God who has a tough old time resisting cheap “baddies” — even when intellectually I know how bad they are me. For what it’s worth, however, here’s a thought to bless us all:

Look again at the “Keep Calm and Carry On Poster”. That message and the crown, meant to bring King George VI to mind, is of even more value when we use it to remind ourselves of our genuine, authentic royal heritage as sons and daughters of the Highest King who wants us to steadfastly endure with healthy choices. In other words, we are meant for greater things than Dollar Store chocolate and the leftovers that no one else wants! We are divinely capable of not buying them in the first place, or quietly putting them in the trash, and/or empowering ourselves with prayer to issue a gracious, cheerful No thank you” to the well-meaning provider of these deceptive items.

As the beloved Truman Madsen said as quoted in Maurine Proctor’s recent Meridian Article, “What you are is so much greater than what you have yet done, it is incredible.” You may want to go back and re-read the entire article itself for its great insights into the unquenchable desires of the adversary for control over our thoughts and bodies.

The sweetest things in life are not cheap sugary food items, they are the many priceless results of healthy choices that arrive with a generous promise of only more true “goodies” to come!

P.S. It’s easy to print out the “Keep Calm and Carry On” poster right now! Just right-click on it, then click on SAVE AS to your desktop where you can print it out. Or go to www.KeepCalmandCarryOn.com for a genuine poster or t-shirt.