Riches, Boyfriends, Beauty, and a Kidnapping! 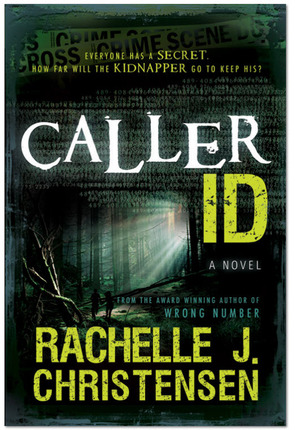 Courtney Beckham loves to run. Caller ID by Rachelle J. Christensen opens with Courtney and her football player boyfriend, Sean, meeting for a run in the mountains near her Salt Lake City home. Following the run Sean makes it clear he expects more than flirting and kissing from Courtney. Their fight ends in uncertainty over whether they’re still dating or not. She goes from this encounter to her father’s office where she works part time. Flirty talk and actions with one of his assistants turns to a hot kiss and a date for the following day.

It would be easy to assume that Courtney has it all. She’s extra ordinarily beautiful, her father is super wealthy, she’s an only child, and the family lives on a large acreage with plenty of room for her horses. However her father is remote and totally wrapped up in his land development company and her mother is absorbed by her spa and her social agenda. Since Courtney was assaulted by a boyfriend two years earlier, she’s gone through a long list of boyfriends, each romance lasting only until the man becomes too amorous, even though her flirting and provocative behavior has led them to think she would welcome a more physical relationship. She just wants to have fun since she’s not interested in settling down until she finishes school and by flirting and dating men she wouldn’t consider becoming serious with, she thinks she’s protecting herself from a serious relationship.

Before her date with her father’s assistant, Courtney plans to go for a fast ride on her horse. Her dog, Pepper, accompanies her. Since her parents are away, she decides to ride toward a mountain trail her father warned her might be dangerous after a hiker was murdered near there the previous year. She’s ready to turn back when her dog darts into the brush. She dismounts and goes after Pepper. Instead of finding her dog, she discovers a clearing filled with marijuana plants. Before she can leave the area, she is captured by the men guarding the field. She is beaten and threatened with rape until their boss orders them not to touch her and issues a demand for ransom. When the FBI gets involved Agent Jason Edwards takes a personal interest in the case.

Courtney is not particularly likable at first. Though she’s highly intelligent and tech savvy, she’s spoiled, naive, self-centered, unrealistic, and has little regard for other’s feelings or expectations, but as the story progresses she discovers depths and courage in herself she didn’t know she had. She faces moral choices that are humbling and reveal growth, learns regard for others, and sets a course toward becoming a strong individual.

The plot moves rapidly and deals with a modern problem faced in several western states with the discovery of marijuana plots hidden on public forest land that are often tended and guarded by illegal workers. Christensen uses the tools of modern technology such as smart phones and computers in a way that makes her stories contemporary and real. Elements of her ending may be frustrating to some, but carries a strong touch of modern realism. She is rapidly becoming a writer to watch for in the Mystery/Suspense genre and mystery fans will enjoy this one, especially those who like a hint of romance added to the mix.

Rachelle Christensen is an Idaho native though she, her husband, and four children now reside in Utah. She graduated from Utah State University with a degree in psychology and a minor in music. Her first book, Wrong Number received the 2011 League of Utah Writers Outstanding Book of the Year award and was a Whitney finalist.