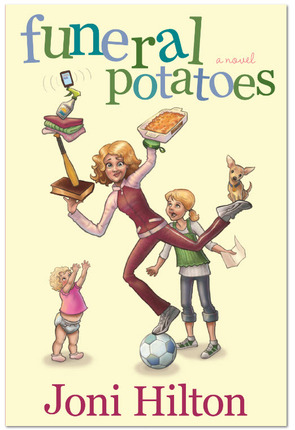 Somewhere in the middle of four kids, an idiot dachshund who isn’t housebroken, an over-achiever sister, being a counselor in the Relief Society presidency and her efforts to reactivate her brother, Ted, Sydney cooks funeral potatoes to perfection for every ward funeral. Joni Hilton begins her new novel Funeral Potatoes by explaining why she doesn’t like funerals, though she and everyone she knows loves funeral potatoes. She even provides the recipe.

This book carries the reader through the usual home disasters where children and pets are involved. We soon see Sydney is as obsessive about bringing Ted back to church as her sister is about being the best, first, most of whatever she does. Sydney even goes so far as to pray for one disaster after another to befall her brother in hopes these dire experiences will help him magically gain a testimony.

If she didn’t already have enough to do between her family and Relief Society, she gets an added assignment. She’s called as Young Women’s Camp Director! Every woman who has ever gone to camp with a gang of Young Women should definitely read chapters fifteen and sixteen.

And of course, there are funerals scattered throughout the book; funerals of those dearly loved, funerals of those not so well-loved, and funeral potatoes served to all following these services. All of those funerals add up to a message of their own and some valuable lessons for Sydney.

Joni Hilton is well known in LDS circles for her humorous approach to “Mormon Culture.” She has the charming ability to laugh with us instead of at us. In Funeral Potatoes she helps us see the humorous side of our culture’s drive to “become perfect.” Sydney’s experiences aren’t particularly unique, though they may be a bit exaggerated. She presents those incidents that bring most of us to tears when they happen to us, and they do happen to most of us sooner or later, and puts them into perspective enabling us to see how unimportant they are in the long run or in God’s time and gives them a funny twist that leaves the reader chuckling. She invites us to laugh along with her and at ourselves at the same time.

The beginning of this story seemed a little slow to me and I wasn’t sure if all the explanation about funerals was the author acting as narrator or the main character’s view, a character who hadn’t been introduced yet. A much too long list of characters and their backgrounds followed. Also too much information that had already been given in the Acknowledgments was repeated. Once I got past that first chapter, Hilton’s humor took over and I enjoyed it, laughed out loud several times, and thought of several people to whom I’d love to give a copy of this book.

The characters are fun, the plot wanders a little, and sometimes some of the messages come across as preachy, but overall this is an enjoyable book. I even love the cover and I’ve been quite outspoken at times about not liking cartoony covers, but this one fits. I suspect most Mormon moms will identify with it.

Joni Hilton is a multi-talented woman who has written several plays, seventeen books, and dozens of magazine articles. She also writes for “Music and the Spoken Word.” She is Relief Society president in her ward and has a long list of credentials in radio and television broadcasting. She loves to cook, a talent her husband and four children approve of. They make their home in northern California.