LDS Fiction: The Shaken Earth is One of 2011's Best | Meridian Magazine

LDS Fiction: The Shaken Earth is One of 2011’s Best 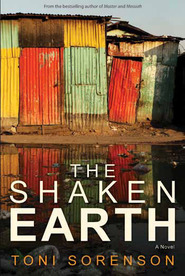 If I were naming the best books of 2011 this book, The Shaken Earth by Toni Sorenson, would hold a place of honor on that list. There are only a handful of other books published this past year that impressed me as deeply as did this one.

The author was one of the earliest humanitarian aid workers to arrive in Haiti following the devastating earthquake in 2010. From that perspective, her many years working in Africa, and her intense research into the history of the island nation, she developed the story of Yolisha. Yolisha isn’t certain of her age, could be ten, could be twelve, and though highly intelligent, she is immature and clings to her mother’s every step. She has no other family; just her mother’s boyfriend and the baby growing in her mother’s tummy. A visiting nurse suspects Yolisha has leukemia, so Yolisha and her mother leave their village for the distant city of Port-au-Prince. Her mother’s boyfriend, Rolando, gives them a ride on his motorcycle to the nearest major village where they board a tap-tap for the journey to the city. It’s a long ride on the bus, overcrowded with sweaty people, chickens, noise, and dust. A profusely bleeding scratch on her cheek from an escaped chicken adds to her misery. Yolisha clings to her mother’s hand or skirt, fearful of being separated. It is almost night when they reach the city and they still have miles to walk to reach the clinic. When they finally reach the clinic, Yolisha’s mother who is seven months pregnant, falls ill and is rushed inside an examining room, leaving the frightened child behind in a crowded waiting room. A frail old man, who once was a teacher, befriends her.

A violent shaking begins and the terrified child screams for her mother. The roof and walls of the clinic collapse. There is death, blood, concrete dust, and confusion everywhere. What follows is a nightmare, but eventually Yolisha is taken to a refugee camp where instead of being united with her mother, she is found by the old man she’d met at the clinic, Webster, who claims to be her grandfather. He takes her to his village and she begins a different life, but never gives up her hope of being reunited with her mother. One of Webster’s friends, a huge woman who earns her living as an artist, wears wildly vivid clothes, and who is a convert to the Mormon faith, takes her under her wing. This woman teaches her about faith, gives her a couple of dresses, and braids her hair. These two pursue every means they know to locate Yolisha’s mother, but eventually only the old man’s promise to the girl to keep looking is their only reason to keep searching for a woman they believe is dead. Yolisha refuses to give up even though the sickness in her blood is making her weaker and it becomes harder to hide her frequent nosebleeds.

Webster sees something special in the girl and is determined to give her the education her mother couldn’t afford. Along with the basics, he teaches her the history of her country and the people crowded into a space too small for them. She learns of the greed and betrayal that brought her ancestors to Haiti as slaves chained in the holds of French ships. She learns of the political corruption, brutality, and betrayals that created the poverty, lack of education, and depletion of Haiti’s resources. She also learns of a continuing kind of slavery still thrust upon many children.

Though The Shaken Earth is filled with tragedy, sad events, unfairness, and so many negative events, the book is not a wallow in depression. It is a story of hope and faith. Yolisha’s story is told in a simple, straight forward style that captivates the reader and keeps the reader turning pages and staying up late to read “just one more page.” Yolisha’s life is in many ways a metaphor of her country. Though beaten down and facing terrible odds, she presses on believing she can make a difference and that there are better times ahead. She embraces the flamboyant big lady’s paintings and clothes as a beacon of light and independence in a devastated country turned to gray dust.

Sorenson has a gift for storytelling. She creates a seemingly simple story that is layered with metaphors that only those “with eyes to see” catch beneath the surface. Without preaching or cramming religion or history down the readers’ throats she educates on both a spiritual and literary level. Whether read as genre or literary fiction The Shaken Earth will captivate readers.

Toni Sorensen has written many books for both the national and LDS markets. She is an avid researcher who has won prominent awards. She is the mother of six children and has one grandchild. She lives in Utah but loves to travel, often as part of a humanitarian group.