LDS Fiction: In God is our Trust, Free men and Dreamers, Vol. 5 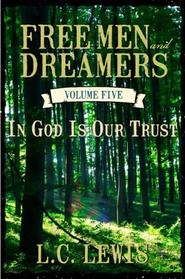 In God is our Trust is the fifth and final volume in the Free Men and Dreamers historical series by L. C. Lewis. This volume is set fifty years after the signing of the U.S. Constitution and begins shortly after the conclusion of the War of 1812. It is a fitting conclusion to a popular series that has taken a hard look at the years following the American Revolution and the signing of a constitution that began a new form of government. It portrays the lives of persons on both sides of the Atlantic who played a part in putting in place and testing the lofty ideals of the founding fathers.

Jed Pearson runs for the state senate and differences escalate over the question of slavery. Slavery isn’t the only division that affects the state of Maryland or Jed and Hannah. Jed’s return home is marred by the discovery that Hannah and Marcus have kept secrets from him. Jed’s hurt pride results in alienation from his wife and best friend. Marcus and his family leave Willows Plantation and attacks on the plantation continue. Those on the plantation know who is behind the attacks, but have no way to prove it.

Jed’s sister, Frannie, has her own problems to deal with. The man she loves refuses to continue their relationship due to his belief that his injuries will make a real marriage impossible and he wishes for Frannie to have a chance for happiness and a family. After years of frustration she finally accepts the proposal of a politically ambitious man.

England reels from the financial burden of two costly wars and there is great political tumult as factions favoring the status quo and those seeking greater social equity and justice compete in parliament. A huge class of poverty stricken people turn to crime and exploiting children in order to exist. Dirty, crime-ridden city slums become a cancer throughout England.

Hannah is devastated by a personal loss and begins to question her religious beliefs. Through her brother-in-law Snowden, she learns of Joseph Smith and finds herself drawn to the young man and longs to learn more of the new religion he has established. She soon learns there is as much controversy and division among people over Joseph Smith as there is over emancipation for slaves.

As the fledgling United States struggles toward unity and it’s place in world affairs, deep divisions occur over slavery, states’ rights, and a religious revival brings about a new religion, despised by those who refuse to accept the possibility of new revelation.

Some readers of this series have been disappointed in sections that seem to drag with too much explanation of the times and background of the story. Others have been delighted by the enriching trivia. Through the series there has been great growth in the major characters and the overall plot has been satisfying, but I’ve felt some disappointment that other characters have not been developed more, and though there have been interesting subplots, not all have been fleshed out as much as I would have liked.

Overall I have enjoyed this series and am sorry to see it conclude. It has covered an important segment in American history and has served as a reminder of America’s past. We hear a great deal about the Revolutionary War and the American Civil War, but not much attention is given to those years between these two great wars when the states struggled to find common ground, fought another war to maintain independence, and first examined questions of federal versus states’ rights and authority as well as questions of human rights and began the interpretation of the U.S. Constitution.

L.C. Lewis has lived all of her life in Maryland and living in the center of the historically rich area that includes, Philadelphia, New York, Washington D.C., and Baltimore, she has been an avid student of American history. She has published two other books in addition to this five volume series. She and her husband are the parents of four children.