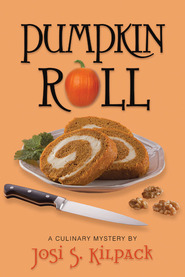 Josi S. Kilpack’s latest addition to her culinary Sadie Hoffmiller mystery series is oh-so-perfect for Halloween suspense.  Pumpkin Roll  isn’t about any benign jack-o-lantern, but is a thoroughly creepy mystery–with a plethora of recipes thrown into the bargain.  If, like me, you’re not into reading recipes, just skip them and concentrate on a great mystery with a super sized helping of suspense.

Sadie Hoffmiller accompanies her friend, Detective Pete Cunningham, to a Boston suburb to assist him in babysitting his three rambunctious grandsons while their parents hunt for an apartment near the hospital in a distant city, where he’ll be doing his residency.  Everything goes well until the woman across the street, Mrs. Wapple, decides to dig for potatoes in her front yard in the middle of the night.  The woman clearly has mental problems and Sadie sets out to get help for her.  First she contacts Mrs. Wapple’s snooty sister, which doesn’t go well.  The children and the neighbors consider Mrs. Wapple to be a witch, especially after a dog dies right after she curses it, leaving the dog’s owner broken-hearted and angry.  The neighbors also find her a pain because she steals their mail out of their mailboxes. Sadie’s efforts to help result in an embarrassing encounter with a hotel bouncer and strange things start happening at the home where she and Pete are babysitting.

Someone seems to be able to enter the house at will, leaving odd items behind. Strange things are seen, a cold mist drifts down the hall, doors bang, and a haunting voice calls Sadie’s name.  Pranks take on more serious overtones and lives are at risk.  Sadie doesn’t believe in ghosts or witchcraft, but something is certainly happening that is beyond her understanding.

Pete and Sadie’s first concern is to keep the children safe.  Sadie has turned over all of her clients at her new private investigator service to her son, Shawn, so she can concentrate on Pete and the children, but there’s something going on she can’t ignore.  Everything points to a ghost or Mrs. Wapple, but most of the happenings seem to beyond Mrs. Wapple’s capabilities.  Yet there doesn’t seem to be a logical explanation for any of the strange events.

If Sadie doesn’t have enough to worry about, her old nemesis, Jane the reporter, shows up and soon involves herself in the mystery.  She’s helpful, but Sadie can’t help worrying that something of a romantic nature is going on between her son and Jane.

Then too, she learns Pete is keeping a secret from her and the local police seem to think she’s involved in an attempted murder.

In previous books in this series, I didn’t find Sadie a likable or sympathetic character, but in Pumpkin Roll her snoopiness is softened to curiosity and concern, she doesn’t whine or indulge in self pity, and she’s far more cautious and inclined toward common sense in her approach to dangerous situations.  I found myself liking her a great deal. The other characters are portrayed realistically and the three little boys are a delight and even though they’re children and don’t play a major role, there is a subtle amount of growth that takes place even in them.

The plot in Pumpkin Roll is crafted so smoothly, the escalation of events builds the tension to a spine tingling point in what feels like an effortless climb until the precipice suddenly looms ahead.  At that point the mystery ends, but the suspense explodes.  Kilpack has written many enjoyable novels, but I think this is her most finely crafted one yet.

Pumpkin Roll is Kilpack’s fourteenth novel and the sixth in her Sadie Hoffmiller Culinary Mystery Series.  She is currently the chairman of the Whitney Awards contest which unfortunately makes Pumpkin Roll ineligible for entry in the contest, though I’m sure there will be plenty who will nominate it anyway.  Previously she has been the recipient of the 2007 Mystery/Suspense Award for Sheep’s Clothing and was a finalist in 2009 for Lemon Tart.  She and her husband live in Willard, Utah, with their four children and a variety of pets.