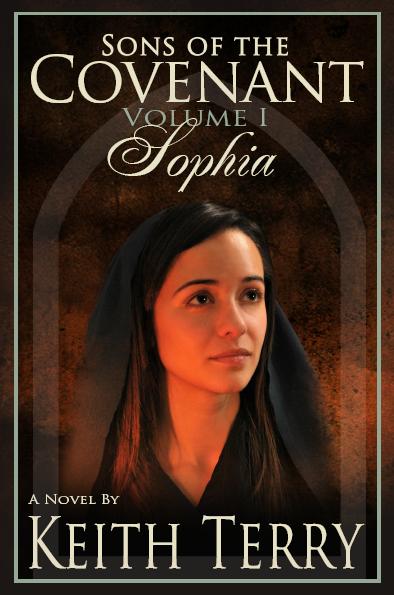 Keith Terry’s novel Sophia is Volume One in a new series called Sons of the Covenant. It is the story of a young Roman Catholic postulant, Sophia Yushchenko, who leaves her medical and religious training in Vienna, Austria, to help her family move from the Ukraine to Austria during World War I.  It also contains two other major story lines; that of Jared McBride who is studying to be a doctor in Mexico when his father dies in the Mormon polygamous colony where Jared grew up, and that of Caroline Olson, secretary to Joseph F. Smith, who is writing the Prophet’s biography.  Their stories are set amid the problems of a world at war, followed by a flu pandemic that took the lives of millions of people around the world.

Sophia and her family are expelled from their train during a blizzard when they refuse the conductor’s demand for more money or time alone with Sophia. Her father is injured in a blow from a heavy metal lantern and Sophia struggles through the snow to find help for her family.  Eventually she is chosen to accompany an elderly nun to Borneo to provide relief for the struggling tribes there.  Having worked mostly with wounded soldiers, she welcomes the opportunity to provide other medical care. When tragedy strikes, the young girl is sent on a circuitous journey back to Vienna.  With the war raging, her journey takes her to the Sandwich Islands where she catches a glimpse of President Smith and is impressed enough to want to meet him.  Instead she makes contact with his secretary and a friendship between the two women begins.  When she reaches California, she is assigned to a small hospital to wait out the war until her journey home can resume.  There she meets the arrogant young doctor, Jared McBride.

Jared detests his father’s other wives and arranges to spirit his mother and younger brother back to relatives in Utah away from domineering Aunt Sarah, his father’s first wife, who now considers herself the head of the family.  He’s been offered a job in California, splitting his time between a small Catholic hospital and providing medical care at the surrounding ranches for the poor migrant farm workers.  His faith in God has wavered and he is convinced science is of more worth than religion. He’s overworked and has little patience with the young Catholic postulate who speaks neither English nor Spanish until an emergency arises where he learns she has had far more experience than he has in dealing with gunshot wounds.

Caroline’s portion is the larger part of the book as she serves as the vehicle to tell stories of the sixth president of the Church’s  life, beginning with his presence at the funeral for his father Hyrum Smith and his Uncle Joseph.  As she reads the various chapters she has written back to him and jots down stories he wants included in his biography, the hardships of his childhood and his closeness to his mother are revealed along with several incidents involving his hot temper.  His mission to Hawaii comes next and is closely followed by his disastrous, impulsive first marriage to a flighty, mentally ill woman whom he left alone far too much.  His marriages to four other women are lumped together and we see little personality or differences among them. Carolyn herself, doesn’t truly come to life other than as a functionary who stays in touch with Sophia and serves President Joseph F. Smith as a reader and biographer.

The transitions from one story to another are annoying and poorly spaced.  I got the feeling that the most compelling stories, those of Sophia and Jared, were merely a framework or vehicle for telling President Smith’s story.  I was disappointed in the telling of President Smith’s story because it began near the end of his life and seemed to be a series of flashbacks.  The tone isn’t sympathetic and left me feeling like President Smith was first an aggressive bully, then an inconsiderate husband, and finally a self-centered, though kind tyrant.

Taken as individual chapters or series of chapters, Terry is a compelling writer who can hold his audience.  He is particularly good telling Sophia’s story.  Unfortunately he sometimes indulges in author intrusion, telling the reader things the point of view character couldn’t possibly know or see.  Sophia is a compelling character who grows in a believable way from a small town teenager with an altruistic and benevolent dream to a young woman with depth and maturity.  I would have liked the story to be more hers.  Jared is not particularly likable in the beginning, yet he is someone the reader can feel sympathetic toward.  His growth is more sudden and less believable than that of Sophia.

Overall, the novel is an interesting glimpse into a time nearly a hundred years in the past.

Keith Terry is the author of numerous books for the LDS market.  Probably his most well known one is Out of Darkness. He also co-wrote Emma with his wife, Ann.