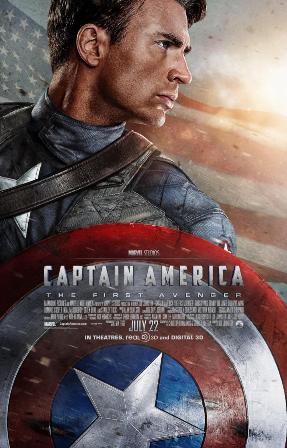 As a superhero-origin movie, Captain America lays out cliche after cliche, following the template of numerous films that have come before it. As a patriotic crowd pleaser, however, it offers plenty of old-fashioned delights. I have to borrow what another reviewer said here, because he summed it up perfectly: “If you’ve got a problem with any of the plot points in Captain America, he will kick you in the chest and make you love your country.” This is a flawed film, but it’s also a delightfully patriotic, action-filled romp. Director Joe Johnston (The Rocketeer) delivers a pleasingly nostalgic look at the World War II era, complete with a terrific sense of American pride. This is a character, and a film, that believes in the goodness of the United States and what it stands for. From the wardrobe to the vernacular, the music, and even the propoganda posters, Johnston lovingly stirs up nostalgia for a bygone time when the country believed in itself and the world seemed painted in black and white (America, England, and their allies were good, the Nazis and their allies were evil) instead of modern shades of grey.

The eye for period detail is terrific, but contrasts poorly with the cartoonish nature of the villain, Red Skull, and the futuristic design of his weaponry. Though this is a superhero film, the villain lacks the sophisticated crusade of Magneto or the fascinating/terrifying philosophy of The Joker; instead, he’s just another one-dimensional, power-hungry magalomaniac bent on world destruction and domination, as found in dozens of other superhero/fantasy/spy films. The lack of a compelling antagonist drags what could have been a great movie down to just being a good one. What’s more, though true to the comics, Red Skull looks like he’d be more at home fighting He-Man than a WWII patriot and his faceless minions look like carryovers from that terrible G.I. Joe movie. Though he’s harnessed the power of the gods (a nice nod to Thor), Red Skull’s technology looks futuristic even by today’s standards and seems jarringly out of place in a story set 70 years ago. Don’t blame Hugo Weaving (The Lord of the Rings); the fact that the villain holds any interest and displays any menace at all is due to the performance of this excellent actor doing the best he can with an underwritten character.

That said, there is plenty to enjoy here, both in the hard-hitting action scenes and in the performances. Chris Evans, in the title role, switches off his usual wisecracking routine and delivers an earnest and virtuous performance. The transition of a 90 pound weakling into a hulking behemoth is truly incredible. Captain America, refreshingly, eschews the imperfections that plague other superheroes. These imperfections, granted, make the others interesting as they grow and develop, but they’re not always the best role models. Instead of the rock-star vanity of Iron Man, the conflicted torment of Hulk, or the bravado of Thor, Captain America represents a return to the good-natured wholesomeness of classic all-American heroes who represent humility and conscience. Perhaps our nation is more jaded now and we relate better to flawed characters; that said, it was nice for once to be treated to a character who’s simply a good person. I’ve no doubt that it’ll be great fun to see how his old-fashioned values interact with those of the just-mentioned superheroes in next summer’s Avengers movie.

Evans’ romance will a British officer (Haylee Atwell, in a strong, intelligent, and sweet performance) is nicely handled, taking the less-is-more approach. It was a wise move to show how, even before she was attracted to him, she admired his courage and meekness. Though the ad campaign takes a “you’re going to get so many girls” line out of context and the clueless hero briefly allows a female stranger to give him a kiss of gratitude, Captain America is ultimately a one-gal guy and the film is refreshingly chaste. Stanley Tucci (The Devil Wears Prada, Julie and Julia) continues to impress, giving a warm and funny depiction of a good-hearted German scientist. Rounding up the cast is Tommy Lee Jones, who gets the film’s funniest lines. Jones hasn’t been this enjoyable since The Fugitive and the first Men in Black, and it’s good to have him back in form. Make sure you stick around until the end of the credits for a nice little surprise. All in all, Captain America is yet another solid entry in the Marvel film canon, and it sets audiences up nicely for what’s sure to be a great time in next year’s The Avengers.

CONTENT OVERVIEW: Captain America: The First Avenger is rated PG-13. It has plenty of bloodless war violence/fighting and one incident of quick blood spray. Language is minimal, with only 2 mild and 1 moderate uses of profanity that I recall. Some characters drink alcohol. A villain kills unarmed persons, but the hero values innocent life. There is no nudity or sexuality apart from two kisses.

MESSAGES TO DISCUSS: True heroes do not enjoy violence or killing, but will forcefully defend liberty and innocent lives if necessary, even to the point of giving up their own lives. Parents may want to draw the attention of youth to the example of another patriot, Captain Moroni, who is described in the Book of Mormon: “And Moroni was a strong and a mighty man; he was a man of a perfect understanding, yea, a man that did not delight in bloodshed; a man whose soul did joy in the liberty and the freedom of his country, and his brethren from bondage and slavery. Yea, a man whose heart did swell with thanksgiving to his God, for the many privileges and blessings which he bestowed upon his people; a man who did labor exceedingly for the welfare and safety of his people.Yea, and he was a man who was firm in the faith of Christ, and he had sworn with an oath to defend his people, his rights, and his country, and his religion, even to the loss of his blood. Now the Nephites were taught to defend themselves against their enemies, even to the shedding of blood if it were necessary; yea, and they were also taught never to give an offense, yea, and never to raise the sword except it were against an enemy, except it were to preserve their lives.” (Alma 48: 11-14)

For more film reviews, articles, and fun videos by this author, visit: www.mormonmovieguy.com