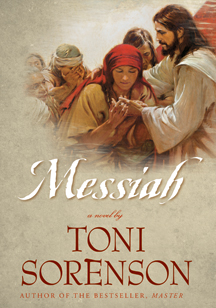 Messiah by Toni Sorenson is one of those rare books that totally captivates the reader.  I’ve enjoyed other books by Sorenson, but none touched me more than this one.  Even readers who ordinarily skip fictionalized accounts of scriptural events will find this one worth their time.

The story begins with the famine in the Americas that preceded the announcement of the imminent birth of the long awaited Messiah.  Kiah is a boy of fourteen who would rather spend his time hunting than studying at the synagogue school.  He, his older brother, his grandfather, and his mother were abandoned by their father when he was an infant, leaving them to be shunned and ridiculed by their neighbors. The older brother is away with the Nephite Army fighting Lamanites and robbers.

On one of his hunting trips, Kiah stumbles on a band of Gadianton robbers and is shocked to discover their leader is a leading merchant in his own community and the father of the girl his brother hopes to marry.  On his return, he tells his grandfather of his discovery and the grandfather lays charges against the man, Hem, in court.  The corrupt judges dismiss the charges and Hem makes several attempts to discredit or destroy Kiah.

The famine brought about because of the people’s failure to repent weakens the people and many deaths occur.  Instead of repenting the people turn to persecuting those who believe a messiah will come.  They fail to understand the difference between wearing sack cloth and ashes as outward signs of humility and truly repenting of their wrong doing and changing their lives. They blame Nephi for the famine instead of acknowledging their own evil.

As Kiah grows and yearns for the kind of faith his mother and grandfather possess, he also longs to become a warrior and seeps himself in military skills.  His father and the Prophet Nephi both warn him that war isn’t as glamorous as he thinks and that the Lord  has need of a different kind of warrior. Though he is unpopular in his own village, he has a close friend in Zarahemla, Jonas, the grandson of the prophet.

As Kiah grows in physical strength he has many experiences which challenge him both physically and spiritually.  He is impetuous, has a quick temper, and hungers for the attention and recognition other boys receive from their fathers.  Frequently he attempts more than he is ready to undertake.  He is loyal and yearns to better care for his mother, worries about the young woman his brother cared for before he went away then spurned when he returned, and is frustrated to see so many people suffering while Hem grows fat and rises in importance and power.  When the enmity between him and Hem grows so severe his life is in danger, and his mother has an opportunity to remarry a good man, Kiah sets out to join his friend’s family in Zarahemla.

Being young and curious, he gets into trouble in a Lamanite village.  The horrific experience he goes through both solidifies his faith in the Messiah and teaches him a valuable survival skill which goes beyond weapons and physical strength to the power of being still and listening to God.  A later experience teaches him that not only are all Nephites not good, but all Lamanites are not evil.  When he finally arrives in Zarahemla, he is no longer anxious to join the Army, but is eager to learn and become a missionary, but still his temper flares at injustices committed against the innocent and doesn’t hesitate to join in battle when it is necessary.

Both Kiah and Jonas grow older and fall in love. They have children and face both joy and pain as some of their children are faithful and some follow the trends of the evil around them. They face intense trials as the people waver between peace and war.  Even the end of the drought brings only temporary peace, and the Gadiantons rise in power until they control most of the courts and positions of power in the land.  Miracles occur as the prophecy of Samuel the Lamanite comes to pass, but the peace that follows is only temporary and as time passes the number who continue to believe in the birth of the Messiah dwindles until they are threatened with annihilation by the robbers who have taken over the land.

Anyone who has read the Book of Mormon knows how the story ends, Sorenson does a masterful job of bringing details to life, making the experience real and meaningful. The reader will sorrow with the parents of lost children and take joy in those who are found and who endure.

Several things impressed me in this account of a familiar event.  There were surprises like in a good mystery, clues I should have followed or questioned more.  I never felt like the author was preaching, yet I felt a powerful affirmation of testimony.  Sorenson did a masterful job of presenting questions and doubts that made Kiah feel real and human, then gradually showing the answers without sermons. Even knowing that the Nephites came from a solid Jewish background, I was surprised by the detail of Jewish customs and ordinances still observed by Lehi’s descendants after six hundred years had passed. Yes, there were slight variations, but they were still recognizable.

For me, the greatest difficulty I found in this novel was the similarity of names which sometimes became confusing and I had to go back to be certain I wasn’t confusing characters.  Ordinarily this is a flaw in a book, but in this case, the author can’t be held responsible for the similarity of names such as Gidgiddoni and Giddianhi since those are names found together in the Book of Mormon and essential to historical accuracy.

With both the observance of Passover and Easter this week, I found reading Messiah particularly meaningful and poignant. This is one of those books that crosses the line to be enjoyed equally by either gender and though written for an adult audience, is not too difficult for teens.  It is both simple and direct and filled with complex depth.

The beautiful cover is called One by One by Walter Rane.

This is far from Sorenson’s first book.  She has authored a number of books for both the national and the LDS markets.  This book which relates the events leading up to the birth and crucifixion of the Savior in the New World parallels the Old World events she recounted in Master in 2008.   In 2006 her novel Redemption Road was honored by the Association of Mormon Letters as novel of the year.  On a more personal level, she takes great satisfaction in being the mother of six children.