LDS Fiction: Faith behind the Fences by Kelly Dispirito Taylor

LDS Fiction: Faith behind the Fences by Kelly Dispirito Taylor 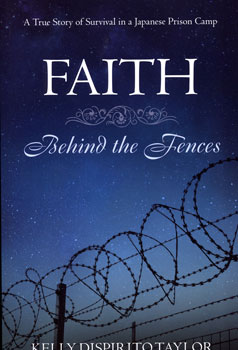 Faith Behind the Fences by Kelly Dispirito Taylor is a blend of biography and fiction. I find fictionalized accounts of real events often don’t work out well, but in this case, Taylor has proved it can be done effectively.  Taylor began this story because she was intrigued by an elderly Eurasian woman in her ward who sometimes shared experiences from her years in a Japanese concentration camp on the island of Sumatra during World War II. She approached the woman and asked for permission to compile her memories into a book.  Her offer was eagerly accepted and both Hanny and her sister, Peggy, related the events of their teenage years.

Hanny has just finished her first year of high school at a Catholic boarding school, when Pearl Harbor is bombed.  Europeans and those with Dutch/Indonesian citizenship know at once that with the American Navy sidelined, their coal, oil, and mineral rich islands will soon be taken over by Japanese soldiers.  They prepare as best they can by hiding valuables, and mining engineers such as Hanny’s father, set out to disable the mines and destroy the oil fields at great risk to themselves and their families.

The family’s arrest and incarceration has all of the poignancy and humiliation of similar arrests by the Nazis in Europe. The parents are separated, leaving Hanny who is thirteen, her musically talented sister, Peggy, 12, and their little brothers, Justin and George, with their mother, Tina. Once imprisoned they hear nothing concerning their father.

Crowded conditions, little food, disease, death, and forced hard work along with transfers from one deplorable prison to another mark Hanny’s growth from thirteen to eighteen.  During that time her mother’s rock solid faith in God and her determination to care for her family and to show kindness to all keeps them from giving up.  She keeps the children’s faith and hope alive by helping them to recognize the small miracles that help them survive.

A decade ago I heard Kitty De Ruyter speak of her experiences as a young Indonesian child during the same Japanese invasion Hanny Londt-Schultz recounts as a teenager.  It impressed me and I placed her in my mind alongside Corrie ten Boom as one of my real life heroines.  On reading Faith Behind the Fences, I added Hanny and Peggy along with their mother, Tina, to that list of women I deeply admire.

Taylor does a remarkable job of describing the island paradise of Sumatra and the stark ugliness of the camps.  She also lets her characters grow, both in age and in maturity.  Their insights become the readers own as the young girls struggle with a life that is unfair and devoid of all teenagers normally do.  Many of the characters who fill less-than-noble roles are seen with an eye of understanding, even as their despicable actions infuriate the girls and the reader. Though the story is a true story, it is fictionalized because after sixty years there is no way to recall exact conversations or sometimes even time sequences.

Hanny joined the Church years after her ordeal while most of her family did not.  To her, there were correlations she could see between the Gospel and the hope and faith, nurtured by her mother’s love, that explained the many small miracles that carried her through the ordeal.  Many terrible things happened to her and to the other women in those camps, yet this book is more uplifting than depressing.  It left me feeling much the way I did when I read The Hiding Place by Corrie ten Boom.

Kelly DiSpirito Taylor teaches at East Carolina University.  She and her husband have five children and make their home in North Carolina.