Abish: Mother of Faith is a continuation of K.C. Grant’s first novel, Abish: Daughter of God.  It begins where the Lamanite converts to the gospel bury their weapons and pledge never to fight again.  Abish, who played a major role in the conversion of her people, is now married and serving as a midwife and all around medical practitioner.  Her husband, who has earned a living as a blacksmith, is having a hard time supporting them because there is no longer a demand for weaponry, but his faith is strong and he chooses to kneel rather than fight when attacked by the Lamanites who rejected the message brought by the sons of King Mosiah. 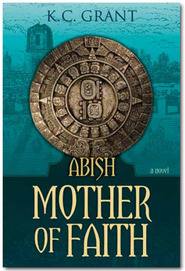 Abish longs for a child and trains her friend Teara to also serve as a medical practitioner and share her work load.  Abish’s prayers are answered and she becomes pregnant as the threats against her people escalate.  She gives birth to twins at the height of the attack.  Her joy is tempered by the awfulness of the massacre of those dear to her.

As Abish raises her children, the faithful flee to Nephite territory where they are offered land and protection.  Their faith endures and their testimonies are strong that Christ the Savior will come and that He will come for all people. However, their troubles are not over as the Nephites break into factions and their security is threatened.  Old friendships from the first volume are renewed and Abish must make decisions that test her faith.  Through it all she endeavors to instill faith in God and trust in Christ in her children’s hearts. The time comes when the children and grandchildren of those first people who covenanted not to bear arms volunteer to go to battle in defense of their families and the Nephites. Thus Abish becomes one of those much-lauded mothers of the Lamanite Stripling Warriors.

Grant’s characters are strong and we see their faith grow as they face their numerous trials. Though she chose to call her main character Abish, she could be any woman of that time period as nothing is known beyond a scant reference to the real Abish in the Book of Mormon.  The setting is believable.  The plot is interesting and holds the reader’s attention in spite of the fact most readers familiar with the Book of Mormon are familiar with the scriptural framework of the story.  Dialogue is handled well.

The plot develops well until the last few chapters which are a little flat and involve more telling than showing.  The ending is also more preachy than the earlier portions of the book.  If the reader hasn’t gotten the message in the main body of the story, no amount of telling the reader what he/she should have learned, is going to work.  The author has been an excellent storyteller up to this point, even making me forget my growing fatigue with the glut of Book of Mormon historical/fantasies in the LDS market.  The rushed ending negated some of my positive feelings toward an otherwise excellent novel.  I’m aware some readers like to have an extended wrap-up epilog at the end of the book and may not share my view of these final chapters.

Those who feel they gain a better understanding of scripture through fictionalized accounts will enjoy this book more than those who prefer to simply read the scriptures and ponder and pray for deeper meaning on their own.  This story is rich in scriptural insights and provides an easy to understand picture of the life those Anti-Lehi-Nephi people had to endure and the sacrifices they made for their faith.

Grant is a graduate of Weber College in Utah.  She served a Spanish speaking LDS mission in Southern California. She enrolled in a study abroad program in Centro Mexicano Internacional in Michoacan, Mexico where she studied Hispanic Literature.  She has had articles published in several family oriented magazines.  Currently she is working on a suspense novel.